HIGHLAND PARK (AFP) – A 21-year-old man who allegedly opened fire on a July 4 parade in a wealthy Chicago suburb while disguised in women’s clothing was charged with seven counts of first-degree murder on Tuesday, prosecutors said.

Robert Crimo, 21, was arrested on Monday, several hours after the attack on a festive Independence Day crowd.

“There will be more charges,” Lake County State’s Attorney Eric Rinehart told reporters. “We anticipate dozens of more charges centred around each of the victims.”

Police spokesman Christopher Covelli said the death toll rose to seven on Tuesday after one of the wounded victims died in hospital. More than 35 people were injured.

Among the dead were Kevin McCarthy, 37, and his wife, Irina, 35 – the parents of a two-year-old boy who was found wandering alone after the shooting, according to CBS News.

Covelli said no motive had been established for the attack, which sent panicked parade-goers fleeing for their lives. 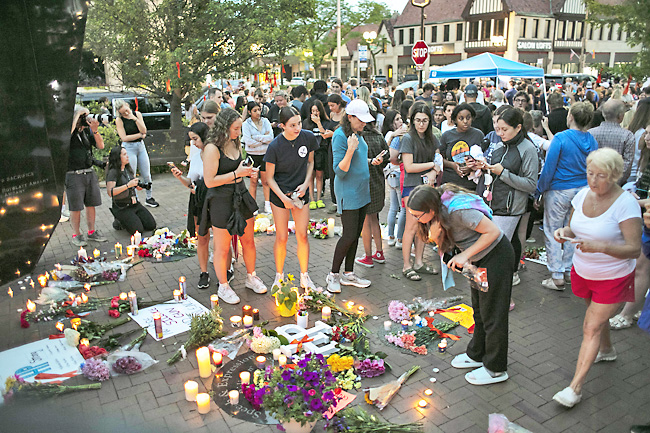 “We do believe Crimo pre-planned this attack for several weeks,” and that he acted alone, he said.

“We have no information to suggest at this point it was racially motivated, motivated by religion or any other protected status,” he added.

He said Crimo has a history of mental health issues and threatening behaviour.

Police had been called twice to Crimo’s home in 2019, once to investigate a suicide attempt and the second time because a relative said he had threatened to “kill everyone” in the family, he said.

Police removed 16 knives, a dagger and a sword from the home but did not make any arrests, he said.

Covelli said Crimo used a fire escape to access the roof of a building overlooking the parade route and fired more than 70 rounds from a rifle “similar to an AR-15,” one of several guns he had purchased legally.

“Crimo was dressed in women’s clothing and investigators believe he did this to conceal his facial tattoos and his identity and help him during the escape with the other people who were fleeing the chaos,” he said.

Covelli said Crimo went to his mother’s nearby home after the shooting and borrowed her car. He was captured about eight hours later after a brief chase.

He also said the authorities were investigating disturbing online posts and videos made by Crimo. The shooting has left the upscale suburb in shock.