Japan’s landmark capsules coming down to sit in museums

TOKYO (AP) – Nakagin Capsule Tower, a building tucked away in a corner of downtown Tokyo that is made up of boxes stacked on top of each other, is an avant-garde honeycomb of science-fiction-era housing long admired as a masterpiece.

It’s now being demolished in a careful process that includes preserving some of its 140 capsules, to be shipped to museums around the world.

Preparations have been going on for months to clear the surrounding areas, for safely dismantling the landmark near Ginza. The first capsule will be removed in the next few weeks.

Built in 1972, the 13-floor building embodies the so-called “metabolism” vision of its architect Kisho Kurokawa: The idea that cities and buildings are always changing, reflecting life, in rhythm with the human body.

“No one exists divorced from the thoughts of those around him. All comes into existence through an assembly of causes. All things are interrelated. In accord with this principle, it is our aim to build an ideal world, step by step,” Kurokawa wrote in his 1994 book, Philosophy of Symbiosis.

Although striking in appearance and concept, the building outlived modern construction guidelines and needed to be torn down. 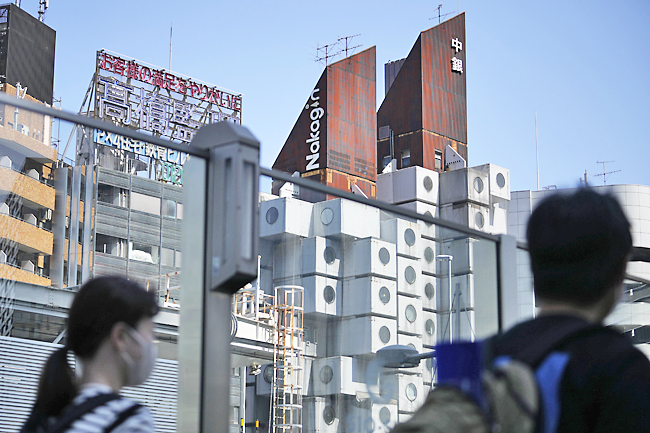 Skyscrapers have popped up nearby, dwarfing Nakagin. A developer took over the property in 2021.

Tatsuyuki Maeda, who started using Nakagin as a second home in 2010, said he simply loved being in that 2.5-metre wide space, so tiny but cozy it felt like a child’s hideaway. And it got his creative juices going, he said.

“The view from that round window felt so good. At night, when cars sped by, their lights on the nearby freeway were pretty. And the cityscape was beautiful,” Maeda said.

Appliances and shelves are built into the walls. A desk pops out in one section. In another is a Sony reel-to-reel tape recorder, state-of-the-art electronics of the 1970s that’s historical memorabilia now like the building itself.

Only about a third of Nakagin’s residents lived there full-time in recent years. Most used it as offices and workspaces. They tended to be creative people, musicians, filmmakers and architects, as though it drew people sharing similar values.

Maeda, who does public relations work, owned 15 capsules, mainly to have a say in the building’s fate, and had rented some of them out. Residents would party together, he recalled.

He and others had been working together since 2014 to save Nakagin, first to prevent its destruction and rebuild it, but eventually to hand down its legacy as an artwork. The project raised money through crowd-funding and put out a book, complete with photos, in March, titled, Nakagin Capsule Tower: The Last Record.

The preservation project calls for some of the capsules to allow for real-life living in a separate locale. Those in museums will be refinished by the Kurokawa architectural office, which went over the original designs to figure out how each box could be detached with minimal damage, a feat especially difficult in the crowded Ginza area.

A Swarthmore College professor whose specialty is Japanese modernism Will Gardner said the metabolist movement had its “moment” of recognition for its organic approach to Tokyo’s 20th Century urban-planning problems, such as over-crowding and a lack of infrastructure.

It was an era when Japan was rebuilding from the ruins of World War II, undergoing rapid economic growth, buzzing with creative energy and trying to define itself.

But metabolist designs did not win wide acceptance among real estate developers, construction companies or consumers, who all turned to more conservative prefabricated housing, said Gardner, who wrote The Metabolist Imagination: Visions of the City in Postwar Japanese Architecture and Science Fiction.

“This was a generation of architects that came out in this era when everything had been destroyed. But at the same time there was a lot of dynamism, and the economy was on the rebound, and there seemed to be a moment when this big vision could really thrive,” he said.