THE WASHINGTON POST – Halfway into his memoir, James Patterson by James Patterson, James Patterson takes a moment to discuss his writing process. It’s nothing fancy, he explains, and it starts with a folder stuffed with unused story ideas. “When the time comes for me to consider a new novel,” he writes, “I’ll take down the trusty-dusty Idea folder.”

Given Patterson’s fecundity, you have to ask: Is it ever not the time? Does the Idea folder ever go back to whence it came?

Patterson is among the world’s best-selling and most wildly prolific living authors.

His books have sold more than 300 million copies. His new memoir is the 10th book he’s published so far this year, and one of four books he has slated for release this month.

A checklist of books on his website includes nearly 400 titles, comprising thrillers, true-crime books, contributions to various children’s and YA series and collaborations with a variety of celebrities including a former president and a former Fox News host.

Patterson, 75, insists he’s responsible for at least outlining every last one of these literary creations.

Patterson’s approach to writing is unapologetically pragmatic: Give ‘em something irresistibly compelling, then give ‘em more of it, quickly. It’s also the MO of his memoir, filled with snappy, short chapters and a lot of name-dropping, from Dolly Parton (the unlikely co-author of Run, Rose, Run) to Tom Cruise (potential movie collaborator) to James Taylor (patient at a mental hospital he once worked at). 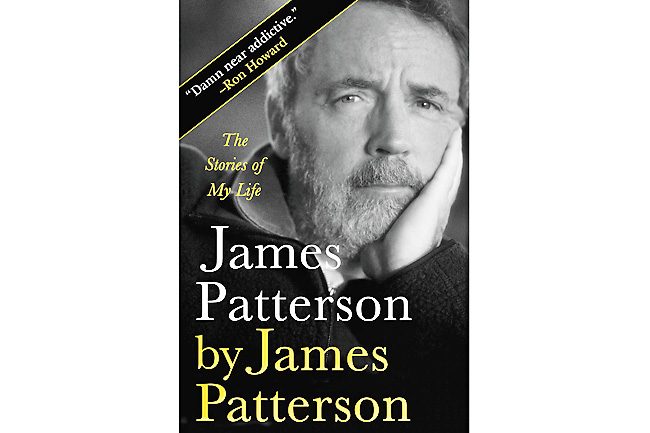 His writing process is pragmatic, too. His a-ha moment in terms of efficiency, he explains, came while writing 1993’s Along Came a Spider: Rather than fill out the story he’d outlined, he decided the outline was the novel.

He likens this approach to Bruce Springsteen’s bare-bones Nebraska album, as if a minimalist aesthetic were the same thing as being satisfied with your first draft. Or perhaps Patterson is just pitching himself to a potential new celeb collaborator. (Don’t do it, Bruce!)
Patterson is a man of the people, as his sales figures decisively prove. But in his memoir, he also positions himself as a man of taste.

A lengthy list of his favourite books is an exercise in careful balance of brows low and high: For every Lee Child, a Gabriel García Márquez; for every John Grisham, a Bernard Malamud.

That balancing act extends to his description of his own life. He’s college-educated and spent time as an advertising executive before becoming a novelist, but refers often to his humble roots in blue-collar Newburgh. (“I’m kind of a working-class storyteller. I just keep chopping wood.”) He’s proud that his first novel, 1976’s The Thomas Berryman Number, won a prestigious Edgar Award, but self-effacingly says he wrote it while “still a literary twit”. He thrills at meeting John Updike but is more deeply heartened by a reader who tells him that the first book she ever read was a Patterson novel.

After a time, Patterson’s play-it-down-the-middle approach feels less like the remembrances of a Renaissance man and more like evasive, unassertive hedging. He mushily criticises Jeff Bezos when asked to attend one of his private A-list get-togethers: “I didn’t feel Amazon always wielded its tremendous power for the good of readers, writers, or publishers. Just my opinion.” He goes anyway. (Bezos owns The Washington Post).

He recalls golfing with former presidents Bill Clinton and Donald Trump. When he spots them playing together, his prose goes squishy: “It’s the way things used to be in politics. Better, saner times.” You can feel a terrible novel about golf-based brinkmanship arrive in the Idea file.

He’s similarly wobbly when he talks about the co-writers who keep his literary machine humming. “Here’s the best defence I’ve come up with about co-writers,” he writes, then lists some famous collaborators: Simon and Garfunkel, Lennon and McCartney, Woodward and Bernstein, Joel and Ethan Coen.

All of this is lamentable, not just because it makes his narrative feel simplistic and glib. It also makes Patterson, an objectively interesting person given his contribution to popular books, not so interesting. Or perhaps, more precisely, not so forthcoming.

Why was he so interested in writing thrillers – particularly at a time when he was, as he says, a “literary snoot?” Why has he set his Alex Cross thrillers in DC, a city he doesn’t describe spending much time in? He recalls strongly protesting a film producer wanting to make his Black hero, Alex Cross, White: “Not happening. Not for seven figures. Not ever.” This virtuous effort in the name of artistic integrity goes unexplained.

To be sure, Patterson has been a force for good in the literary world. His massive sales presumably make it easier for his publisher, Little, Brown, to invest in riskier titles; he’s given money directly to independent-bookstore staffers; he partners with universities and nonprofits to improve literacy, especially among young boys. He insists that parents adopt an iron law: “We read in our house.”

James Patterson by James Patterson is carefully processed, larded with thank-yous and aw-shucks demurrals when he comes close to expressing a firm opinion beyond anything involving writing and selling books. “I look at myself as just another idiot wandering planet Earth with no real idea what makes the world go ‘round, no particular identity, just another lost soul.”

He punctuates that last story with an odd statement: “Look at all the stories I’ve made up in this book.” After hedging on so many particular stories in his memoir, he then hedges on the whole of it. But that’s Patterson maintaining his formula for success: Stories are disposable and never meant to be studied too closely – including his.