JERUSALEM (AP) – A group of Jewish settlers rampaged through a Palestinian town in the northern West Bank on Thursday, attacking shops and residents with stones and iron bars, according to Palestinian reports and amateur video from the scene. Over 40 Palestinians were reported wounded.

It was the latest violence in the northern West Bank, where the Israeli military has been conducting nightly arrest raids against suspected Palestinian militants.

It was not immediately clear what sparked Thursday’s rampage in the northern West Bank, but Palestinian militants in the area have carried out several roadside shootings in recent weeks. The area is home to a number of hardline settlements, whose residents often intimidate Palestinians and vandalise their property.

Ghassan Daghlas, a Palestinian official who monitors settlement activities in the area, said some 70 settlers from the hardline settlement of Yitzhar appeared in Hawara, on the outskirts of the city of Nablus, without warning.

He said mobs beat Palestinians, damaged shops and cars and set fire to a city park. He said 22 people were struck by stones, and 20 others were beaten up.

“The Israeli army was doing nothing but protecting them,” he said.

Among those injured was AP photographer Majdi Mohammed, who was struck in the knee and lightly hurt by an Israeli tear gas canister fired by a soldier. 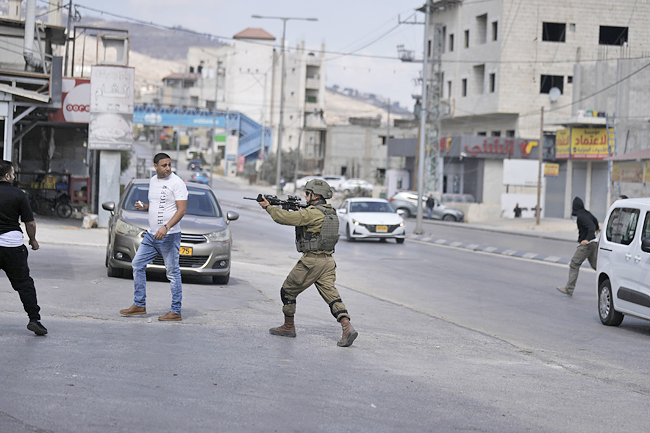