BAGHDAD (AP) – Tens of thousands of Iraqis attended a mass prayer in a Baghdad suburb yesterday alled for by an influential Shiite cleric, sparking fears of instability amid a deepening political crisis that has followed the country’s national elections.

Followers of Moqtada al-Sadr arrived in the capital from across the country, filling up Sadr City’s al-Falah Street – the main thoroughfare that cuts across the populist figure’s key bastion of support. Worshippers carried Iraqi flags and wore white shrouds, typically donned by his supporters.

The event was considered a show of force from the cleric who’s party won the highest number of seats in the October national elections but withdrew after failing to form a government with Sunni and Kurdish allies in Iraq’s cutthroat power-sharing system.

Followers stood under the scorching sun and chanted religious slogans. Al-Sadr’s representative, Sheikh Mahmoud al-Jiyashi, read aloud a speech from the cleric during the service that reiterated calls to disband armed groups – an indirect reference to Iran-backed Iraqi militia groups affiliated with his rivals.

Ahmad Kadhim, 17, was among the worshippers. He said he was disappointed al-Sadr himself did not appear at the service. “I would have been happy just to see him, but this wish did not come true,” he said. 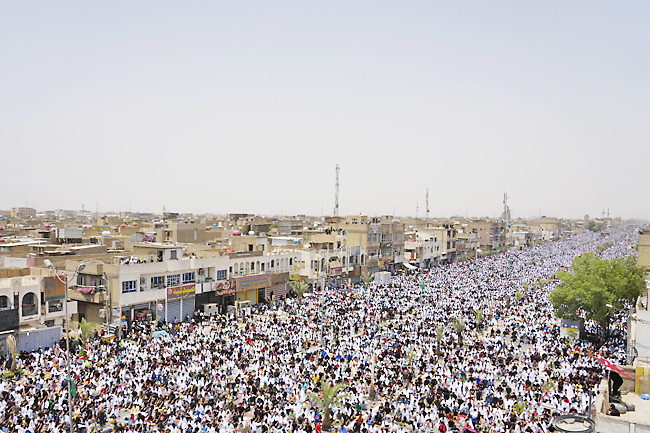 By capitalising on fears that the mass prayer could turn into protests, al-Sadr sent a potent message of his authority and power. The event was among the largest gatherings of al-Sadr’s followers after the US-led invasion that toppled Saddam Hussein in 2003. But more importantly, it carried a message to al-Sadr’s political rivals of his ability to mobilise the Iraqi street and destabilise the country.

In a tweet on Thursday ahead of the prayer, al-Sadr said the choice to protest was up to his followers.

“I support them if they want to stand up for reform,” he wrote. Many considered that a veiled threat to his rivals.

Al-Sadr, who won the most seats in the October national elections, withdrew from the government formation last month, following eight months of stalemate.