In it, an all-Black expedition to Antarctica unearths something seemingly impossible in the ice, and about which I will say no more. Just pick up a copy of this very funny, thought-provoking book.

Or better still, read Johnson’s latest, Invisible Things, again a work of cultural and political satire, but this time framed around an unsettling discovery on Jupiter’s moon Europa. Before we get to that, however, take a close look at the novel’s opening:

“After months in deep space conducting an intensive field study of social dynamics aboard the cryoship SS Delany, Nalini Jackson, NASAx Post-Doctorate Fellow of Applied Sociology, DA Sc, came to an uncomfortable conclusion: She didn’t really like people, on the whole. It was an embarrassing realisation given that her life’s work was studying them.”

There’s a lot going on in these sentences, but pause for a moment over the SS Delany, which will later be joined by a second cryoship called the SS Ursula 50.

What’s the point of these obvious genuflections to Samuel R Delany and Ursula K Le Guin, two of the most admired science fiction writers of our time? 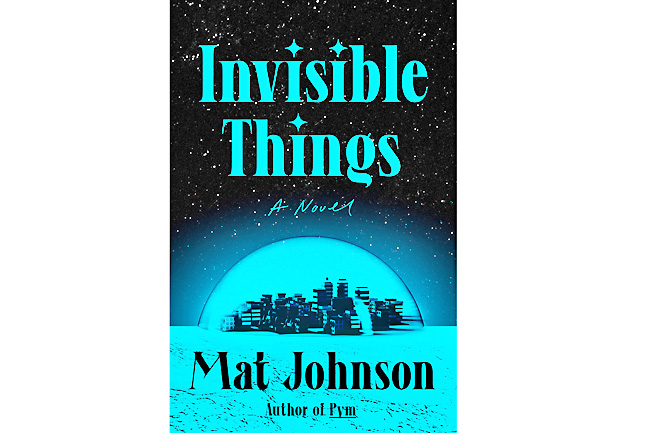 A small act of homage, obviously, but Johnson may also be signalling that in this future a person’s race and identity – prominent concerns of Delany and Le Guin – are no longer flash points. It takes a while before the reader learns that Nalini is Black and even longer to realise that her colleague ne Causwell is both gay and Black.

These facts play virtually no role in the story. What’s really important are economic, theological and political systems and how they shape a society.

Though science fiction tends to be set in the future, it’s always fundamentally about the present. As Nalini observes on the novel’s second page, we need space travel as a safeguard against extinction.

“If humans didn’t accomplish this goal, the only unanswered question would be which combo of consequences for humanity’s collective sins would deliver the fatal blow.

The range of cataclysms was dazzling but as an academic, Nalini was most impressed with humanity’s ability to embrace the delusion that everything was fine.”

All this sounds very much like Now. And yet, look again at the two passages quoted: Their casual tone, the swing of their prose, their irony are light-years away from the styles of grave Le Guin and experimental Delany. What’s more, Johnson’s knowledge of science fiction isn’t restricted to these two fashionably approved authors.

Characters or events in his book call to mind Kurt Vonnegut’s The Sirens of Titan and “Cat’s Cradle”; Ray Bradbury’s The Martian Chronicles, especially the story Mars is Heaven!; Robert A Heinlein’s Stranger in a Strange Land – Dwayne somewhat resembles a blend of Jubal Harshaw and Valentine Michael Smith; various Twilight Zone episodes; and even the B-movie classic Forbidden Planet, especially notable for its invisible Monsters from the Id.

Given Johnson’s day job as a University of Oregon professor, it’s consequently tempting to employ the language of literary theory and dub Invisible Things an affectionate, intertextual construct, one that draws on half the tropes of modern sf.

Still, awareness of echoes and borrowings merely enriches an already exciting story. During the SS Delany’s flyby of Europa, photography drones record an unexpected bubble shape on the moon’s surface. It can only be a bio-dome.

Close-up imaging then reveals that inside there’s an actual football field. “With white lines sprayed on the grass, raised seating, and just beyond the field itself, a parking lot packed with cars.”

It turns out that the inhabitants of “New Roanoke” have all been “collected” from Earth. According to officially sanctioned dogma, each citizen was chosen by God,

Yet within this bio-domed heaven, one finds all the shops, fast-food restaurants, class inequalities and political chicanery we know from Earth. Everything, as Nalini observes, is “creepily, nauseatingly the same,” right down to the blonde TV anchor who looks as if she’s molded out of wax.Believing it impossible to leave the dome, most people resign themselves to making as good a life there as possible.

Going full Stockholm syndrome, Bob Seaford, the ambitious former captain of the Delany, quickly embraces the policies of the Founders, a conservative, tradition-bound group which over the years has “devolved from a moderate democratic force to an all-powerful, toxic, nativist party”.

To its members, New Roanoke is “the place where the American Dream’s still alive”.

Or is it? Mysterious beings called the Invisible Things supply the population with food and supplies and, presumably, orchestrate the periodic collection of new arrivals.

Johnson never explains these unseen entities, but they might well represent, metaphorically, any of the anti-democratic deities of modern society, whether tech monopolies, political dark money, or much social media, all of which seek covertly to control the world they move in, thus becoming demonic inversions of Adam Smith’s free-market “Invisible Hand”.

Whatever the case, any reference to the existence of Invisible Things is blasphemy, liable to bring upon you their unwanted, perhaps deadly attention.

Plainly, a reader only needs to squint a little to see that Johnson is regularly pointing to the Trumpian United States. After all, members of the Founders’ Party “believe in democracy – they just don’t believe anyone who can’t afford to rig an election should be able to win one”.

Overall, though, simply quoting a few passages from Invisible Things hardly conveys its bounce and energy, though matters do grow a bit heavy-handed in the second half. At that point, a collateral plot line – which I haven’t even hinted at – leads to a major political and cultural crisis on “New Roanoke”.

For a final act of pulp chutzpah, Johnson’s last page suddenly presents a melodramatic image that could have easily graced the cover of some 1940s issue of Astounding or Thrilling Wonder Stories.