THE WASHINGTON POST – On our first night in Sardinia, we struck up a conversation with a solo diner at the next restaurant table. “I left my kids at home so I could hike,” the German said as he studied a topographic map of the second-largest island in the Mediterranean. As he detailed his ambition for a multiday trek, my husband and I could only look at each other, slightly envious, and suppress smiles as our kids did cartwheels in the adjacent square. Delayed two years because of the pandemic, this spring break trip was meant to be an immersion in nature away from our urban Paris home. Could we persuade our daughters, ages nine and 11, to hit the trail?

For many people around the world, Sardinia is synonymous with spiagge, the powdery beaches on the Costa Smeralda (Emerald Coast). First developed in the 1960s, this glitzy destination in the island’s northeast quickly became the jet set’s playground, complete with nightclubs, megayachts and celebrity-hunting paparazzi. But about an hour south of Olbia, the mountainous hinterlands near the Gulf of Orosei offer a different sort of playground: a thrilling variety of landscapes and natural wonders threaded with hiking trails for outdoor enthusiasts. The month of April, long before the crowded summer high season, brings an additional allure: a colourful palette of wildflowers blossoming in the sunshine.

For my older daughter, Jane, nothing could be better than listening to Spotify and reading a book while bronzing on the beach. Likewise for her younger sister, Cecilia: Utter the word “hike”, and there’s an instant protest. Let’s just say bribery was involved. (A Snickers is the ultimate energy bar.) But even more compelling than our tasty picnics was our modus operandi: Instead of “hiking”, we’d be going on a quest to find the rare Eleonora’s falcon. We’d alternate hiking days with other activities, so as not to overdo it and put our children off hiking forever. Looking for this raptor – named for the Sardinian queen who’s said to be the first in history to issue such legislation when she granted the falcon protective status in 1392 – created a thematic treasure hunt that got us outdoors and into the wild.

Birding was a pandemic revelation for Cecilia. It all started when I loaned her my digital camera and she managed to photograph a Eurasian kingfisher by a creek in Brittany. Peering at the screen, I was astonished to see a tiny bird, its plumage coloured an intense blue and orange, that I hadn’t yet seen with my own eyes. Soon, her world, devoid of people during the coronavirus crisis, was populated with birds, each species more mesmerising than the last. She carried her dog-eared field guide everywhere, adopted my camera as her own, and even created a bird shrine in her bedroom decorated with feathers, figurines and drawings. (Plus, every inch of wall space is covered with bird posters.) At first, I thought her joy derived from identifying and collecting birds – much like with her rock collection – but she corrected me. She loves birds because of the fun facts and distinguishing characteristics, including some incredible superhero powers.

We identify birdsongs on apps, record sightings on Merlin Bird ID and watch YouTube nature videos. But there’s nothing like being outside in their real habitat. With birding, travel takes on another dimension. Over the course of three hikes in Sardinia, each about eight miles, we took the time to linger over the landscape and notice the details of the avian inhabitants: the swallows swooping in the crepuscular light (“No, Mum, that’s an alpine swift,” Cecilia corrected me, “capable of flying for 200 days without stopping”), the clever crows finagling food (“Wrong again, that’s a hooded crow, considered its own species”), the Eurasian hoopoe showing off its marvellous crest (“Like a fan!”), and the nightingale singing its heart out (“The first time I’ve actually seen him!”). 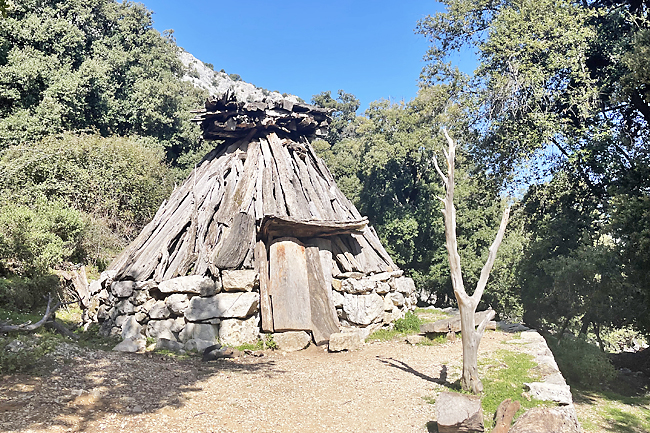 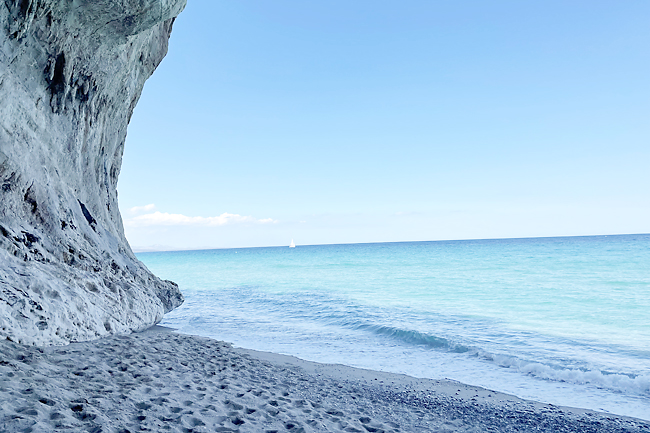 As we stopped to watch, we observed other wondrous things about the Sardinian scenery and culture.

Beneath the Supramonte range, the trail to the Gorropu gorge descended through the island’s wild and remote terrain. Purple crocus flowers bloomed in groves of holm oak, and broom shrubs burst with yellow blooms. To the soundtrack of cow bells, we walked past traditional shepherds’ huts, constructed in a domed teepee style with tree branches, and a trail maintenance crew who, in a mix of Italian, French and English, wished us congratulations on President Emmanuel Macron’s re-election victory in France. Our destination was what the Sardinia Tourism website calls “the most spectacular canyon in Europe and … also one of the deepest.” We were looking for falcons and the golden eagle that nests in the craggy cliffs.

According to Google Maps, we were hiking through a national park called Golfo di Orosei e del Gennargentu. Although its boundaries were established in 1998 and it’s delineated on maps, the national park has never been operational because of local opposition. Communities fought outside regulation of lands they’ve inhabited for millennia. “It was a survival issue, not just because of a rebellious spirit,” explained Maria Luisa Pira of Chintula, the organisation that manages the gorge. “We are able to take good care of our land and have every interest to keep it pristine. Both shepherds and tourist operators can make a living here in perfect balance. We were afraid that sacrificing so much of our land would also mean giving up our ancestor culture.”

Pira hails from the nearby mountain town of Orgosolo, which gained fame for its resistance against and ultimate blocking of a planned military base in 1969. Perched high in the remote mountains, the town today is covered in Cubist-style wall murals, many with political themes. (Orgosolo is also notorious for former banditry and kidnapping.) Indeed, the history of Sardinia is one of defiance against a constant tide of invaders. It’s said the Romans were never able to conquer the island’s rugged interior; the region called Barbagia stems from the word “barbarian”, which Cicero used to describe the inhabitants.

As we spoke with Pira beneath the sheer vertical walls of the canyon, we were entranced by a graceful yellow bird. “The ballerina gialla,” Pira said, is the Italian name for the grey wagtail. She also told us about a project called Life Under Griffon Wings, which aims to re-introduce vultures to the area. The older generation of Sardinians remembers the days when the skies were filled with these soaring scavengers before they were virtually wiped out.

It was in a dazzlingly different landscape – the coastal trail linking Cala Fuili to Cala Luna – that our intrepid birder finally spotted an Eleonora’s falcon in its preferred marine habitat. With sweeping views of the turquoise sea, this hike ranks as one of my all-time favourites. It’s part of the famous Selvaggio Blu, a long-distance hiking route established in 1987 in a truly wild Mediterranean milieu. Cecilia’s falcon sighting was on a quiet stretch before we reached the beach, considered one of Sardinia’s best and therefore packed with sunbathers, most of whom had arrived by boat. Only accessible by foot or sea, the sandy crescent is backed with limestone cliffs housing cavernous grottoes. (The Grotta del Bue Marino is even etched with Neolithic petroglyphs.)

Our last hike brought us to an extraordinary Bronze Age archaeological site sequestered in a cave on top of a mountain peak. The trail led up stone steps and through cracks in the cliffs, where we hoisted ourselves up by our hands and knees. Tiscali was first documented by historian Ettore Pais in 1910; the village’s circular stone dwellings demonstrated remarkable masonry. It’s thought that the Nuragic site was inhabited starting in 15th century BCE, then later by Sards fleeing Roman occupation. There’s not much left of the ruins, but the setting gave me goose bumps: Water dripped down the limestone walls beneath the cave’s collapsed roof, swallows nested in the rock and a view of the Lanaittu Valley was framed through a heart-shaped “window.”

Jane and I descended the mountain ahead of the lingering birdwatchers, and as we walked, minds wandering in sync with our feet, she had an epiphany about a creative school project – an underrated benefit of a hike in the great outdoors. She stopped to record her thoughts on the phone, and it was at that moment when we encountered another hiker: the friendly German we had met on our first evening in Sardinia. When we greeted him, the look of astonishment on his face was priceless.