Inbreeding won’t doom the last of the vaquitas, but fishing might

WASHINGTON (AFP) – Vaquita porpoises are on the edge of extinction, with just 10 left in their sole habitat within Mexico’s Gulf of California.

However, a new study published on Thursday in the journal Science offers some hope: the world’s rarest marine mammals aren’t doomed by a lack of genetic diversity, and can recover if illegal “gillnet” fishing ceases immediately.

“We’re trying to push back on this idea that there’s no hope, that nothing we do could save them at this point. It’s just not an accurate assumption,” lead author Jacqueline Robinson of the University of California San Francisco told AFP.

Porpoises are closely related to dolphins, and share things in common including great intelligence.

The vaquita, whose name means “little cow” in Spanish, measures about 1.5 metres in length, making it the smallest of all cetaceans.

Shy and elusive, they are known for distinctive dark circles around their eyes, and relatively large dorsal fins, which are thought to help them dissipate heat in their warm habitat.

Vaquita numbers were decimated in the 20th Century as a result of being accidentally trapped and drowning in gillnets: long walls of nets hanging in open water that are used to catch fish and shrimp. 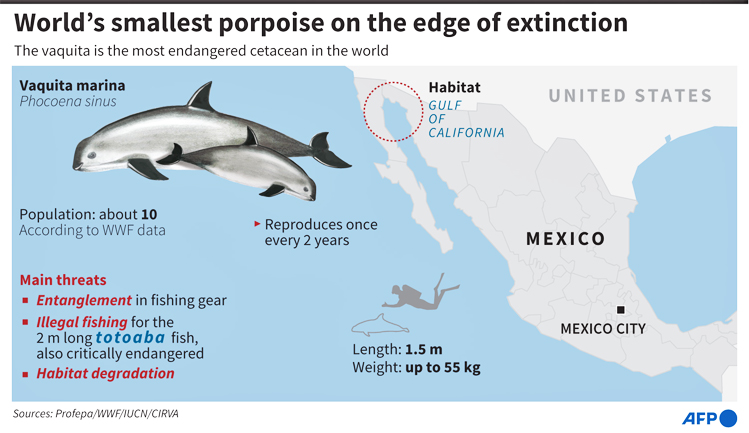 Fishermen sought in particular the totoaba, a large fish about the size of the vaquita, whose swim-bladder is prized in traditional Chinese medicine.

The totoaba itself is endangered and its fishing is illegal, but the ban isn’t always respected.

The vaquita’s historical abundance was unknown, but by the time of the first survey, in 1997, only around 570 remained.

There were fears that harmful mutations among the surviving vaquitas could seal the species’ fate due to inevitable inbreeding.

To find out whether that was the case, the researchers analysed the genomes of 20 vaquitas that lived between 1985 and 2017, and discovered that over the past 250,000 years their population had never exceeded a few thousand.

They also learned that their genetic diversity had always been low, relative to other cetacean species such as dolphins, orcas, and other whales.

“Generally, we would think of low genetic diversity as being a bad thing. But in this case, it is somewhat advantageous for the vaquitas for their possibility of future recovery,” said Robinson.

But it turned out that the frequency of these mutations are very low in vaquitas to begin with, because the population has always been small.

“So those mutations were historically weeded out much more effectively, than in a larger population, where those mutations could persist and remain hidden from natural selection,” explained Robinson.

There are other species that appear more resistant to so-called “inbreeding depression”, including mountain gorillas and narwhals, for similar reasons.

The team then carried out simulations to forecast the species’ future.

Encouragingly, there is only a six per cent chance of vaquitas’ extinction if gillnet fishing is eliminated.

But if such fishing is only reduced, then the extinction risk rises drastically.

Even with an 80 per cent reduction in fishing, the porpoises have a 62 per cent chance of disappearing.

“While we now know that the species’ ability to recover is not limited by their genetics, vaquitas have very little time left,” said co-author Christopher Kyriazis of the University of California, Los Angeles, in a statement.

“If we lose them, it would be the result of our human choices, not inherent genetic factors.”