In Norway, sled dogs train and play in warming Arctic

BOLTERDALEN, NORWAY (AP) – Out of the dark, frozen vastness in this Arctic valley, a chorus of barks and howls trumpeted the return of Green Dog’s oldest puppies from a dogsledding training run through the polar night on Tuesday afternoon.

Karina Bernlow and her husband, Martin Munck, run the outfit Green Dog, which has nearly 300 dogs in three yards. It’s located half a dozen miles from the main village in Svalbard, a Norwegian archipelago so close to the North Pole that winter is shrouded in uninterrupted darkness.

This mix of husky and Greenland dog – a breed known for taller legs, big paws and thick fur – is especially social and thrives in the cold, Bernlow said.

They don’t even fear the rare occasion when a polar bear ambles past the yards.

What hurts them is when this lunar landscape turns unusually warm, which is happening more often as much of the Arctic heats up several times faster than the rest of the world.

Last summer, a few dogsledding tours had to be cancelled so the dogs wouldn’t overheat.
One of the tours leads to an ice cave and Bernlow, who’s been here for more than a decade, said they’re watching it disappear year after year.

“What we can do is teach our children to take care of the planet,” said Bernlow, the mother of four children.

As she walked by them, the newly returned dogs strained their chains to reach out to be petted and puppies rushed to watch from their enclosure. 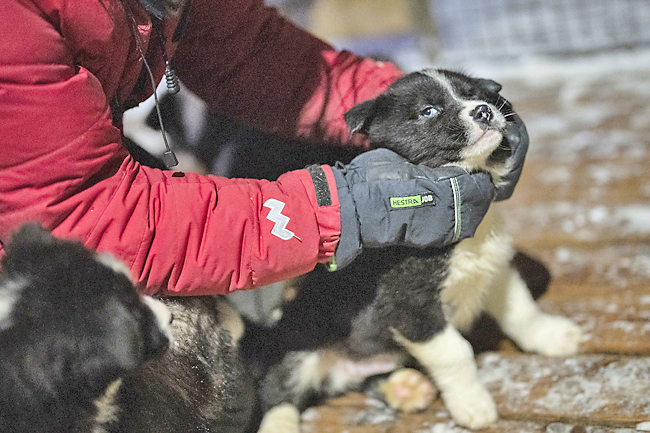