If only humans could sense the world the way animals do

THE WASHINGTON POST – A confession: I regularly get into arguments with children about animal facts. Often, they’re right and I’m wrong – I blame the educational cartoon Wild Kratts.

But I may have wrested back the advantage, thanks to Ed Yong’s new book, An Immense World: How Animal Senses Reveal The Hidden World Around Us.

The premise of the book is that every species has access to a different slice of reality, and we humans can gain new perspectives by tapping into these alien worldviews. This powerful idea, first proposed by Estonian biologist Jakob von Uexküll in 1909, marinated for the better part of a century before catching on among modern scientists. In the last decade, research on other animals’ ways of perceiving and making sense of the world – also known as “umwelt” – has exploded. With An Immense World, Yong, a science journalist at the Atlantic, pulls together these findings with the promise of giving readers a scientifically based glimpse into what it would be like to be another animal.

“Through patient observation, through the technologies at our disposal, through the scientific method, and, above all else, through our curiosity and imagination, we can try to step into [other animals’] worlds,” Yong writes.

Yong proceeds sense by sense, from the familiar (sight, smell, taste), to the exotic (echolocation, electroreception, magnetoreception). He reveals a world thrumming with information to which humans are (perhaps thankfully) insensitive: Bats screaming at earsplitting decibels all night long, katydids playing plant stems like violin strings, flowers blazing with ultraviolet bull’s-eyes. Yong explains how these senses work – sometimes down to the biochemical level – and takes us on field trips to meet the scientists behind the findings, all while masterfully weaving these disparate threads into a single narrative rope. But, as I finished chapter after chapter, I couldn’t shake the feeling that we kept falling short of our promised destination: understanding what it’s like to be another animal. 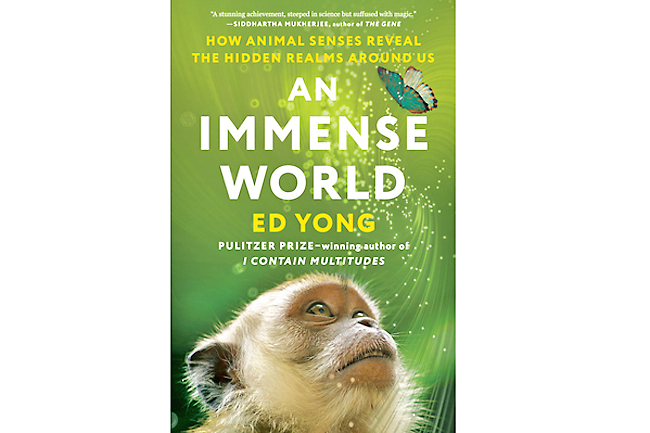 This may be impossible. Perhaps you are familiar with the essay What Is It Like To Be A Bat? written in 1974 by philosopher Thomas Nagel. Nagel argues that even a scientist who learns everything there is to know about echolocation can never really imagine a bat’s experience, its umwelt. That’s because the bat has a lifetime of batty experiences that shape its worldview, not to mention a brain and a body utterly unlike our own. The best you can hope for, he argues, is to understand what it would be like for you, a human, to be a bat.

To my mind, this isn’t a real limitation. Even if you could get a bat to talk, he would probably have difficulty describing his lived, moment-to-moment experiences, just as you’d be baffled if someone asked you to describe your sensory and conscious experiences. (That is, unless you happen to be James Joyce.) This is because your umwelt is the only one you’ve ever known. To the extent that it’s possible, the only way to understand another animal’s umwelt is through comparison and imagination – two areas where Yong falls short.

Again and again, Yong tiptoes up to the precipice of another animal’s experience but never quite takes that final imaginative leap. For instance, when he meets up with cognitive scientist Alexandra Horowitz and her dog Finn, Yong contemplates Horowitz’s insights on her dog’s olfactory-focussed experience: “Smells linger in a way that light does not, revealing history.

The past occupants of Horowitz’s room have left no ghostly visual traces, but their chemical imprint is there for Finn to detect.”

This is all crucial information, but it doesn’t answer the underlying question: What is it like to be a dog? Since we humans are such visual creatures, a visual metaphor might help: Smells linger, so perhaps a dog’s “view” of the world is like a long-exposure photograph. Finn “sees” the ghostly, fading image of the dog who was here yesterday. He also has some X-ray vision (smells passing through surfaces), but he is a little nearsighted, because smells don’t travel as far as light.

Overall, Yong avoids using metaphors to other senses, but when he does indulge in them, these are the parts of the book I keep thinking about. On the question of what it’s like to echolocate like a bat or a dolphin, Yong posits that it might be like “touching with sound”, “It’s as if a dolphin is reaching out and squeezing its surroundings with phantasmal hands,” he writes.

What Yong never really gets to, however, are animals’ inner lives. As part of the umwelt revolution, scientists are exploring the ways other animals knit together sensory information into a coherent experience of the world. This, the squishy and contentious realm of comparative psychology and cognitive ethology, asks such questions as: Do dogs experience jealousy? (Yes!) Do cats understand cause and effect? (Maybe not!) Do dolphins have a sense of self? (Probably).

These findings stretch the imagination and force us to contemplate new ways of experiencing the world.

Although An Immense World doesn’t quite plunge readers into other animals’ worlds, it does make a case for how much we humans miss – and misunderstand – when we fail to consider other animals’ worldviews. This, in itself, is a major achievement. Or, as Yong writes, “The task will be hard, as Nagel predicted. But there is value and glory in the striving.”