How the pandemic hit foreign labour in Malaysia

THE STAR – The COVID-19 pandemic has revealed the extent of Malaysia’s reliance on foreign labour, with many industries hit hard by an acute shortage of workers.

The pandemic led to a freeze in the arrival of foreign workers from March 2020, with the country only re-opening its international borders on April 1 this year.

Here’s how the pandemic has affected Malaysia’s foreign labour market, what’s being done about it, and measures experts say are needed to address the problem.

LOCKDOWN LED TO AN UNPRECEDENTED DROP
The total number of people employed in Malaysia in 2020 – the year the pandemic arrived on the country’s shores – fell by more than 100,000 to 14.96 million compared with 15.07 million in 2019.

It was the first annual drop, duly recorded in the Statistics Department’s April 2022 Labour Report, which contains figures dating back to 1982. 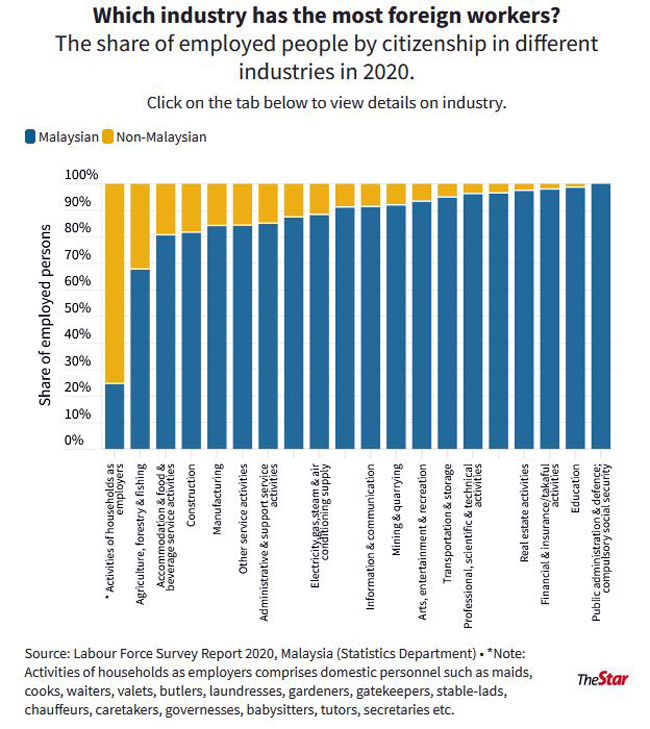 The situation has since improved, with total employed persons rising again last year to 15.06 million. Economists say the lack of foreign workers during the COVID-19 lockdown is one of the key reasons for the drop of employed persons in 2020.

Professor Dr Chung Tin Fah of HELP University said Malaysia may have employed more foreign workers in recent years compared to before, which led to the drop in employed persons for the first time when their entry was restricted during the pandemic.

Director of the economic studies programme at Jeffrey Cheah Institute of Sunway University Dr Yeah Kim Leng, said the decline in total employment in 2020 was in line with the contraction of the economy which shrunk by 5.6 per cent in real gross domestic product (Real GDP).

The 2020 GDP figure was the worst annual performance since the 7.4 per cent decline in 1998 during the Asian financial crisis.

“Barring an escalation of the Russia-Ukraine conflict, Malaysia’s employment growth is expected to pick up more strongly this year following the full re-opening of the economy since the beginning of the second quarter,” he said.

HOW RELIANT IS MALAYSIA ON FOREIGN LABOUR?
The employment industry in Malaysia that is the most reliant on foreign workers is classified as activities of households as employers.

It is a category that comprises maids, cooks, gardeners and other staff employed by households.

Two-thirds of workers in this category are non-Malaysian.

In second place is agriculture, forestry and fishing which has a 32 per cent share of foreign workers; accommodation, food and beverage service activities (19.2 per cent); construction (18.2 per cent) and manufacturing (15.7 per cent).

Because of the pandemic, the number of registered foreign workers, which was estimated at about 1.7 million before COVID-19, fell to 1.17 million.

WHAT’S BEING DONE TO ADDRESS THE SHORTAGE?
On June 26, Human Resources Minister Datuk Seri S Saravanan said Indonesian plantation and manufacturing workers had begun arriving in batches since last month, with more expected in the next two months.

However, Indonesia’s Ambassador to Malaysia said that his country had temporarily stopped receiving new job orders requesting for Indonesian migrant workers for all sectors.

In response, the Human Resources Ministry and Home Ministry would meet soon to solve issues caused by the freeze.

The Social Security Organisation’s Employees Insurance Scheme’s figures show that 92,832 vacancies have been filled across 21 industries from January 1 to July 1 this year.

SITUATION IMPROVING BUT CHALLENGES AHEAD
Professor Chung said currently, the economy is rapidly picking up and demand is surging, but the worker shortage signals a supply chain issue. “A lot of manufacturing companies had to turn down jobs because they don’t have enough workers.

“When the supply chain is not functioning fast enough, they cannot fill orders that are coming in,” he said, adding that the immigration procedure and regulations to employ foreigners will take time, but employment will pick up within the next three to six months.

“The employment numbers are not showing up partly because there is a lag effect due to employment procedures,” he said.

Professor Chung said the employment industry needs to increase its efficiency on the delivery of information and matching job seekers with the right jobs.

Sunway University’s Yeah said the combination of the pandemic, as well as supply and demand shocks, resulted in a rise in business failures, workforce reduction and cutback in production capacity and decline in investment activities – all of which resulted in the overall shrinkage in the job market.

“Industries that have adequate production capacity but facing slow recovery in domestic and export demand are in no hurry to increase their workforce.

“They will likely add headcount only after seeing more stable revenue generation supported by a stable and positive demand outlook,” he said.

He added that for industries that are dependent on unskilled foreign labour, the shortage is more severe, which will likely result in the inability of these industries (such as plantations, construction and low-end manufacturing and services) to maximise profit opportunities arising from the economic recovery.

“For industries facing labour shortages such as healthcare and ICT, the supply and skills mismatch between what the industry needs and the type of graduates produced by local institutions has contributed to the placement challenges faced by recruitment and employment agencies,” he said.

Universiti Malaya economic professor Dr Rajah Rasiah said the shortage in workers has been felt in industries enjoying soaring export demand, such as in oil palm.

He suggested the industry to turn to robotising the harvesting of oil palm fruits, while other farms should also be assisted by unmanned autonomous vehicles, such as drones.

“The government should focus on IR4.0 (Fourth Industrial Revolution) technical and vocational education training (TVET) to make this possible and to create sustainable and high paying jobs for Malaysians.

“With endemicity expected to replace the pandemic, the other sectors that had started to contract in 2020 are enjoying growth again,” he said. Professor Rajah said the return of foreign workers might be unavoidable for some industries, but the intake of foreign workers should be done carefully.

The focus, he said, should be on bringing IR4.0 technologies to all sectors.