How poor sleep can wreck your eating habits

THE WASHINGTON POST – Want to improve your diet? Try getting better sleep.

In recent years, researchers have discovered that our sleep habits strongly influence the amount and types of foods we eat and even whether we gain or lose body fat.

Losing sleep can trigger brain and hormonal changes that stimulate food cravings, which can drive us to consume more calories, especially from junk foods rich in fat and sugar.

If you’re among the millions of adults who are chronically sleep deprived, research suggests that getting just one hour of additional sleep each night can lead to better eating habits and may even help you lose weight.

For many people, a good night’s rest is hard to come by. Sleep experts say that the average adult should get at least seven hours of nightly sleep.

Yet at least one in three adults routinely fails to get enough shut-eye. Some people skimp on sleep so they can stay up late working or surfing the web. Millions of adults also struggle with conditions that disrupt their sleep, such as chronic insomnia, sleep apnea or restless legs syndrome. 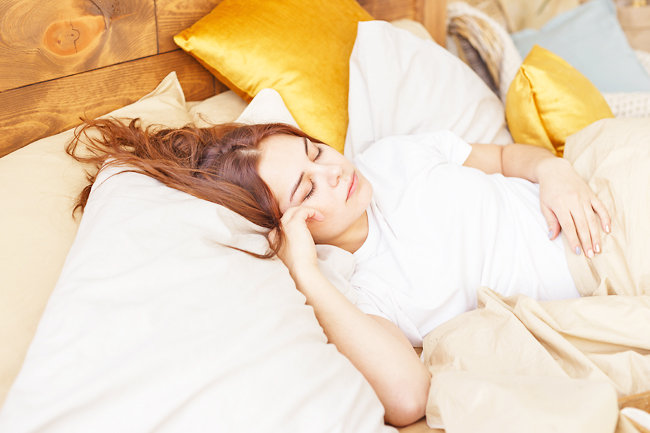 WHY BAD SLEEP CAN MAKE YOU EAT MORE

Research shows, for instance, that consistently poor sleep can set the stage for weight gain. Studies have found that for women, a few nights of short sleep reduces levels of GLP-1, a hormone that signals satiety. In men, sleep loss leads to a spike in ghrelin, a hormone that stimulates hunger.

At the same time, people who are sleep deprived experience changes in their brain activity.

Studies show that when a person misses out on sleep, the region of the brain involved in pleasure-seeking and reward responds more strongly to junk foods such as candy, doughnuts and pizza, creating more powerful urges to indulge in fattening foods. And sleep loss causes decreased activity in other parts of the brain that regulate food intake, making it harder for people to exercise self-control.

“The overwhelming evidence is that when you restrict sleep, people eat more,” said Associate Professor of Nutritional Medicine at Columbia University Irving Medical Center and Director of the Sleep Center of Excellence at Columbia Marie-Pierre St-Onge.

Last year, a group of researchers analysed data from 36 studies that included several hundred thousand participants. They found that people who routinely slept less than seven hours per night had a 26 per cent higher risk of developing obesity compared with people who got the recommended amount of sleep.

One caveat is that this analysis only showed an association between poor sleep and weight gain. To better understand the relationship between sleep and diet, scientists have carried out clinical trials in which they recruit healthy adults and monitor their eating habits as they restrict their nightly sleep.

One trial found that when people slept just five-and-a-half hours a night over a two-week period they consumed an extra 300 calories a day, mostly from snacks such as pretzels, cookies, chips, ice cream and candy. St-Onge analysed many of these trials and concluded that, on average, people eat between 300 and 550 calories more on days when they are sleep deprived compared with when they could sleep seven hours or more.

AN ‘EXPANSION’ OF ABDOMINAL FAT

Perhaps most striking is that sleep deprivation seems to promote a particularly hazardous form of body fat.

In a study published earlier this year in the Journal of the American College of Cardiology, scientists found that when healthy adults got just four hours of nightly sleep over a two-week period, the participants not only ate more and gained weight, they experienced an “expansion” in their abdominal fat, particularly the visceral fat that surrounds internal organs such as the kidneys, liver and intestines.

HOW TO IMPROVE YOUR DIET WITH BETTER SLEEP

The good news for those of us who are chronically sleep deprived is that it’s possible to undo the damaging effects of sleep loss on our diet and waistline. In one study published earlier this year in JAMA Internal Medicine, scientists recruited 80 overweight adults who routinely slept an average of about six hours a night. One group was counselled on how to get more sleep. The other group didn’t get any extra information and served as controls.

A critical part of the counselling sessions was training people to stay off their smartphones and electronic devices as they were getting ready for bed.

“We basically were teaching people how to live without their electronics too close to bedtime,” said author of the study and Director of the Sleep Research Center at the University of Chicago Esra Tasali.

The researchers then followed the groups for two weeks. They found that people in the counselling group extended their sleep by roughly 1.2 hours per night and reduced their food intake by 270 calories per day – even though they were not given any dietary advice.

They also lost a slight amount of weight compared with the control group, and they reported feeling better and having more energy.

“They said they realised it’s okay to not respond to every text message an hour before your bedtime,” Tasali said.

St-Onge at Columbia said that everyone should generally aim to get about seven hours of nightly sleep. You’ll know if you are getting enough sleep if you wake up feeling well rested and are not constantly tired and fatigued.

The key is to tune out your devices and get into bed at a reasonable time. “Some people might need only six hours of sleep, and for others it could be six and a half hours,” St-Onge added. “But I doubt that anyone is good with just five hours of sleep.”