THE WASHINGTON POST – Greenery can add a breath of fresh air to any home, but it can be hard to dedicate much-needed inches to houseplants if you live in a small space.

Plus, living things aren’t exactly a “set it and forget it” accessory. If you care for your plants properly, they’ll grow taller and wider – which is another reason to be strategic when choosing which ones to bring into a small home.

Before you buy a plant, think about where you’ll put it, the conditions of that space and the level of care you’re willing and able to provide. “Then, choose a plant that can both physically fit and thrive in that space,” said plant shop co-owner Lily Cox.

The hardy plant has adapted to survive without direct sunlight, so it can live in poorly lit apartments or basements. Snake plants also grow relatively slowly, which is ideal for anyone concerned about their plants outgrowing their space.

ZZ PLANTS
Another plant that grows vertically is Zamioculcas zamiifolia, aka ZZ. Cox said the plant works well in a corner on the floor, because its stems and leaves grow up rather than out.

Like the snake plant, the ZZ tolerates low light. It also grows slowly, so you won’t have to worry about it overtaking its designated space. 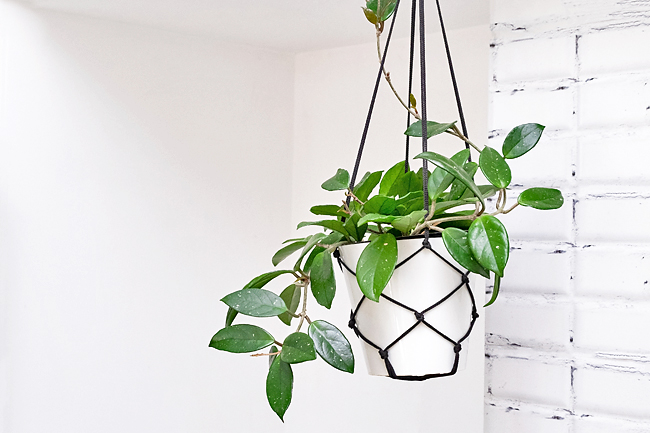 FERNS
If you’d like a girthier plant, try a fern. You can hang it from the ceiling, place it on a shelf or display it in a wall planter, so you won’t have to sacrifice your valuable floor space.

Pangborn said ferns require consistent watering, but they thrive in humid conditions and can transition from indoors to outdoors.

HOYAS
Drought-tolerant plants, such as vining, semi-succulent hoyas, can be placed on tall shelves that may be difficult to reach for watering, Cox said.

Hoyas come in many varieties, but all prefer medium to bright indirect light, so keep them out of dark rooms.

BAMBOO PALMS
Small spaces don’t have to limit you to small plants. You just need to choose wisely.

Splaying, treelike plants can quickly get in the way, so houseplant consultant Jocelyn Perez-Blanco suggests the bamboo palm for those with limited floor space.

“They grow more upright and don’t splay out like a majesty or parlor palm, so they’re great corner plants,” Perez-Blanco said.

PHILODENDRONS
The trailing philodendron can hang from the ceiling or sit on a shelf across from a window. If you’d rather use your wall, Cox suggests setting a plant on a side table or shelf and creating an ivy look by fastening the trailing growth to clear hooks.

Pothos is another popular low-maintenance trailing option. Both philodendron and pothos thrive in bright, indirect light with watering once a week or every other week.

CACTUSES
Vertical-growing cactuses, which lend a sculptural look to a room without compromising horizontal space, thrive when placed at bright windows.

Cactuses “have very slender growth, so they’re a more minimalist option physically and aesthetically as opposed to a leafy, meandering or bushy plant,” Cox said. Just beware of prickles if you have children or pets.

STROMANTHE TRIOSTAR
Like others in the prayer plant family, the striking pink-and-green stromanthe’s leaves fold upward at night and splay out a bit when it’s sunny.

But overall, Perez-Blanco said, the plant remains compact even as it grows taller. Stromanthe plants do best with weekly watering and bright, indirect light, especially if you want to maintain their colouring.

Peperomia have succulent-like properties, so they tend to retain water and require less maintenance. Try putting one in a small pot on a bookshelf or nightstand facing a window; you probably won’t have to repot it frequently.

AIR PLANTS
If you’d prefer not to fuss with pots at all (and you like a less traditional look), Cutsumpas recommends air plants, which don’t require soil to grow.

They also don’t require much maintenance. “Some people like misting air plants, but if you prefer not to get your furniture wet, you can submerge them in a sink full of water for 10 minutes once every few weeks,” Cutsumpas said.

ALOE VERA
Combine form and function with the upward-growing aloe plant. The aloe plant does not require a lot of water to survive. Also, Cutsumpas said, it takes a long time to outgrow its pot.

Keep an aloe plant accessible in a kitchen or bathroom, so you can use the gel for burns and cuts.