The Ministry of Health, with its BruHealth app, was the recipient of the Brunei Info-Communication Technology Awards (BICTA) 2022 Royal Patron Award as the top contestant among all categories yesterday.

Apart from the prestigious award, the app also topped the information and communications technology (ICT) industry category and received a trophy, a certificate and BND10,000 in cash prize.

Minister of Transport and Infocommunications Pengiran Shamhary bin Pengiran Dato Paduka Haji Mustapha, in welcoming remarks during the award ceremony, said, “BICTA ceremony was postponed for two years as a result of the COVID-19 outbreak.

“However, efforts to maintain the momentum of innovation and competitiveness were continuously implemented.” 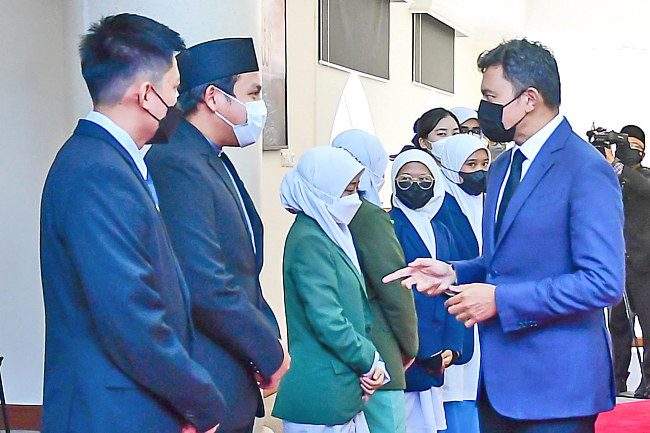 The result was an increase of 27 per cent in participation to 51 entries, compared to last year, he added.

There was no first place winner in the tertiary category. The second spot went to UTB for its Smart Paddy Irrigation System winning a trophy, a certificate and BND3,500. The second runner-up was also UTB for its Smart Waste Bin System with Beacon Technology. The university received a trophy, a certificate and BND1,750 in cash prize.

The support, according to Pengiran Shamhary, shows mutual consensus to advance the Sultanate’s aspirations to become a smart nation through digital transformation.

His Royal Highness also received a pesambah from Pengiran Shamhary in the form of an augmented reality (AR) book titled Ristaan Kenangan BICTA by a local developer from UBD.

Winners of BICTA 2022 will represent the Sultanate at the Asia Pacific ICT Alliance (APICTA) Awards 2022 to be held later this year.

Since the country’s first participation in APICTA in 2008, Brunei has won two awards and 27 merits.