WASHINGTON (AFP) – World number four Minjee Lee fired a five-under-par 66 on Friday to grab a share of the 36-hole lead alongside Mina Harigae at the 77th United States (US) Women’s Open in North Carolina.

Australia’s Lee, chasing a second major title after her triumph at the Evian Championship last year, had four of her six birdies on the front nine and rebounded from her only bogey at 14 with birdies at 15 and 16 to join Harigae on nine-under-par 133 at Pine Needles in Southern Pines.

America’s Harigae, whose first-round 64 was one off the US Women’s Open record, followed up with a two-under-par 69 that featured five birdies and a pair of bogeys.

The duo were two strokes in front of Sweden’s Anna Nordqvist and South Korean Choi Hye-jin. Nordqvist had four birdies in her three-under-par 68 while Choi raced up the leaderboard with an impressive seven-under-par 64 that featured nine birdies.

Lee said putting was again the key to her round. She poured in long birdie putts at the first, eighth and ninth holes and rapped in a four-footer at the second, making the turn at eight-under – one shot behind the early target set by Harigae. 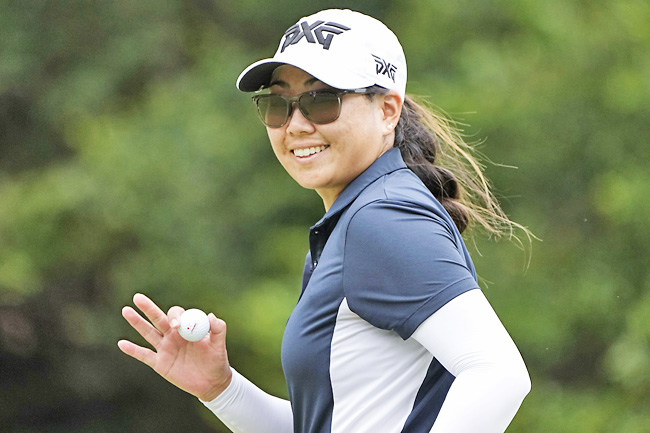 “My putting was pretty solid today, and even when I was in kind of tough spots I was able to get up and down,” said Lee, who won the LPGA Founders Cup last month for her seventh LPGA title and her first since her Evian triumph.

“I just tried to take advantage of my birdie opportunities and that’s pretty much what I did today.”

Lee said her approach on the weekend would be “pretty much the same as the first two days”. She said regardless of how the light rain that began falling late in the day might alter the course, she would “just take whatever’s in front of me and just take one step at a time because this golf course can really catch up to you quick”.

Harigae said her round was “a little shaky” compared to her sizzling effort on Thursday.

“A little more stressful today for sure, and things got a little shaky there, but I was really happy with the way I hung in there and made some good birdies coming in,” said the 32-year-old from California, whose parents are from Japan.

Seeking her first LPGA title and a first top-10 finish in a major, Harigae said she believes she has the maturity now to contend on the weekend.

“Today, even when things weren’t going great, I was really able to keep myself calm and just try to be really level-headed out there,”
she said.

She led the Women’s British Open at Carnoustie last year, ultimately finishing tied for 13th. “Since then, I have the better tools to navigate these new experiences,” Harigae said. “I think just trying to be calm, just go about my day.”

Ko’s four-under 67 included an eagle at the par-five 15th.

Lindblad kept herself in the hunt with an even-par 71 that featured three birdies and three bogeys.

“I was just trying to do the same thing,” Lindblad said. “I know I made a lot of putts yesterday. I was a little bit further away from the pin today.”

Lindblad played alongside Swedish great Annika Sorenstam, winner of the 1996 US Women’s Open on the same course.