AP – Jesse, 17, is breaking into a house in Sandy Lake, Minnesota. Jenny, his girlfriend, shows up to stop him. But what neither of them anticipated was for the owner, Emmett, to catch them.

Joshua Moehling’s gripping debut And There He Kept Her gains speed steadily after Jesse and Jenny are reported missing. The slow roll becomes two trains speeding at each other as the book switches between Emmett, who is holding Jenny captive, and Packard, the acting sheriff trying to find the two missing teens. When the story smashes to its conclusion, the dust cloud left in its violent wake promises a sequel.

While Packard is consumed with this new case, he’s also juggling the woes of the town – feuding neighbours and petty drug crimes – and the ghosts of his own past. There’s a skeleton in his closet that he’s determined to keep under wraps, but a town as small as Sandy Lake doesn’t let much slip by.

Emmett, on the other hand, seems to have kept his demons down, completely flying under the radar of the law and the small Midwestern town. The garish, makeshift dungeon in his basement reveals he’s not simply an innocent old man fallen victim to break-ins. Jenny has to unearth some kind of humanity in Emmett if she wants to survive, and the clock is ticking as her insulin supply runs dry.

Moehling’s characters are beyond three-dimensional. They look, sound, smell and think uniquely. Despite having more than a dozen key players popping up throughout And There He Kept Her, their depth makes each one memorable. They are morally ambiguous, each harnessing a reason for being who and what they are. They all make mistakes, have a secret, work toward a goal. Their connections to each other and to the town are undeniable, even when they are thin. 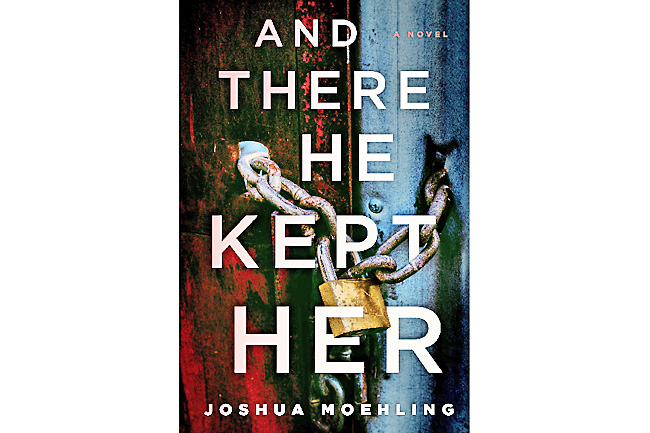 And There He Kept Her plays out like something on TV, resembling Yellowstone in its small-town setting and larger-than-life drama set against captivatingly detailed scenery. Except the novel has fewer plot holes and is far more nuanced in its handling of social issues.

Beyond the small Midwestern town’s persistent discimination, there are themes of poverty, abandonment of the elderly, disability and health complications. Moehling shows it is possible to include hot-button issues without making them the focus – they can live in the background and motivate characters in overt and subtle ways, just as in real life.

Small details crop up that seem not to matter to the story, further lending the novel authenticity and keeping readers guessing at which threads connect to the overarching mystery. Because sometimes, those details come back in a delightfully surprising way.

Complete with a reading group guide and a conversation with the author, And There He Kept Her is a great opportunity to get into a new detective series at the ground level. Especially if you like the idea of the hardboiled detective novel but prefer your stories set in modern times with light touches of current social issues. Moehling’s is a strong debut that shows promise for even better plots, twists, and character development in the future.