YAOUNDE (XINHUA) – Ideline Kuate meandered around Sandaga market in Cameroon’s commercial hub of Douala in search of what to buy.

From her job as a farmer, the 40-year-old earns approximately XAF50,000 (about USD80) each month but it’s no longer enough to adequately feed her family of six.

“(Food) prices were affordable before. With XAF3,000, children could feed well. (Now) with XAF5,000, you cannot feed the family. We eat what is available, no choice,” said Kuate, complaining that a litre of cooking oil she used to buy at XAF1,200 now sells at XAF2,100.

In the capital Yaounde, Marguerite Mbazoa arrived at the Mokolo market to shop but she realised that the fish she used to buy for XAF1,500 now sells at XAF 2,500.

“Everything has become expensive. Homologated prices are no longer respected,” said Mbazoa fuming at how the increase in prices is affecting her children’s feeding habits.

When Xinhua visited the once-popular markets in the two cities, few buyers visited the stalls piled high with local commodities, as their soaring prices have discouraged most of the customers from buying. 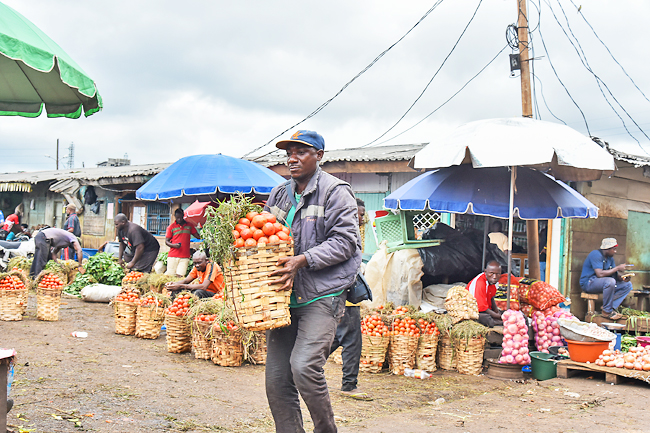 At his shop at Sandaga market, Francois Tague is selling a bag of rice at XAF22,500, the price having doubled in five months.

The 52-year-old said he was contemplating on abandoning his business because there are no buyers.

“It’s discouraging, we are just coping,” he said.

Prices have continued to rise sharply over the last few months in the Central African nation as the economy, which was barely recovering from COVID-19 disruptions, now suffers from both internal and external shocks.

Official figures put the inflation rate at two per cent but purchasing power for an estimated 20 million Cameroonians has dropped considerably over time.

According to Cameroon National Institute of Statistics (NIS), the country is under siege from the rising cost of doing business and the ongoing Russian-Ukrainian conflict which has disrupted the global movement of commodities and pushed up oil prices.

In April, NIS said the prices of food products increased by 10.1 per cent and 8.2 per cent over one year in Douala and Yaounde.

Among the worst affected commodities are bread and rice, whose high costs has made it a luxury among many Cameroonians, said Josephine Carelle Ngah Misso, who was shopping for her family at the Mokolo market.

“The government has to fix this,” she said. “At first I could sell XAF10,000 a day, now I cannot even sell XAF5,500 a day. We are pleading to the government to bring down these prices and increase salaries of civil servants” said Ben Werenge, 60, who trades in food products at the Sandaga market.

Although Cameroon’s government plays a great part subsidising many goods, this has not stopped prices from rising, said economist Jones Damue.

“The war has disrupted production and trade of several commodities, particularly those where Russia and Ukraine are key exporters, including energy, fertilisers, and grains.

“These price increases come on top of already tight commodity markets due to a solid demand recovery from the pandemic, as well as numerous pandemic-related supply constraints,” Damue said.

The government needs to encourage farmers to grow wheat locally and also subsidise prices of some commodities, he added.

The Ministry of Trade recently issued a price list of basic commodities following the unauthorised increase in market prices.

The government has tried to reassure Cameroonians in recent weeks that existing wheat reserves and local crops will meet demand for the subsidised bread. Officials have said subsidy reforms could be included in the 2022/23 budget, though the extent of any reform remains unclear.