Permanent Secretary (Higher Education) at the Ministry of Education (MoE) Dr Haji Azman bin Ahmad; Director of the Islamic Studies Department at the Ministry of Religious Affairs Haji Shamshol bin Haji Omar; Acting Head of the Department of Private Education at the MoE Sofian Erwan bin Mohammad; officers from the Authority for Building Control and Construction Industry (ABCi) at the Ministry of Development; Bank Islam Brunei Darussalam (BIBD) representatives; and members of the school Board of Governors and its senior leadership team also attended.

Miftah An-Nur Islamic International School extends its vision to deliver a state-of-the-art campus which will be home to students and leaders, not only excelling in academics, but also embodying Islamic values.

The event began with the recitation of Surah Al-Fatihah and a Doa by Miftah An-Nur Religious School Principal Ade Al-Faisal, followed by a welcoming speech by the school’s Executive Principal Bilal Buttar who briefly described the history of the school’s establishment. “The purpose built school will have cutting edge technology across the campus, a well-stocked library and resource centre, a canteen, a multipurpose hall, a swimming pool, and at the heart of the campus will be a surau,” said the executive principal, earlier noting that the school will be home to a kindergarten, primary and secondary school. Bilal added that the new campus is scheduled for completion in July 2023.

The event continued with the pouring of concrete in the foundation of the site by Her Royal Highness and members of the Miftah An-Nur Board of Governors. Ade Al-Faisal recited a doa selamat followed with a 3D model video presentation of the new campus. 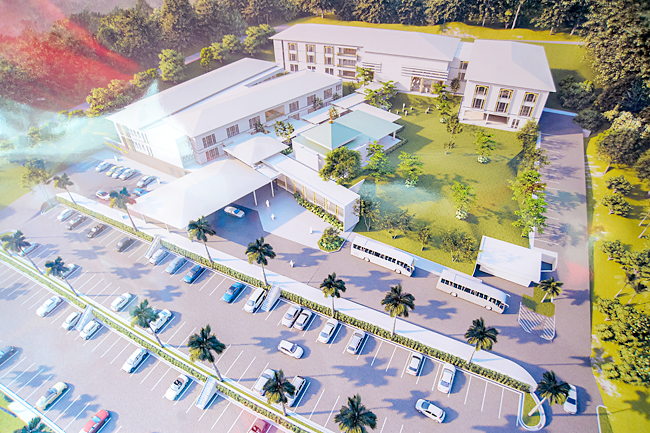