Goal is the gold

RENO, NEVADA (AP) – Since the recovery of sunken treasure began decades ago from an 1857 shipwreck off the coast of South Carolina, tens of millions of dollars worth of gold has been sold.

But scientists, historians and collectors said that the real fortunes will begin to hit the auction block tomorrow. For the first time, hundreds of Gold Rush-era artefacts entombed in the wreckage of the SS Central America will go on public sale.

Known as the “Ship of Gold”, the steamship sank on September 12, 1857, in a hurricane on its way from Panama to New York City. Most of the passengers boarded the SS Central America in Panama after traveling from San Francisco on another ship and taking the train across the isthmus.

Some 425 lives were lost and 153 people were rescued. For more than a century, many of their possessions – some still sealed in safes and passenger trunks – were preserved in the chilly, oxygen-deprived gravesite 2,195 metres under the surface of the Atlantic Ocean.

Chief scientist for every underwater recovery mission Bob Evans said that the items might seem ordinary, but they offer an extraordinary glimpse into the daily life of the passengers and crew, from gold-field workers to high-society San Franciscans.

A few pieces described as priceless rarities could fetch as much as USD1 million at the public auction in Reno, like the lid from the oldest known Wells Fargo treasure shipment box or heavy duty miner’s work pants from the Gold Rush-era – perhaps one of the first of their kind ever made for or by Levi Strauss.

“Some collectors have been waiting for these extraordinary items to come on the market since the legendary, submerged ship was located in 1988 and Life magazine proclaimed it America’s greatest treasure ever found,” said president of Holabird Western Americana Collections in Reno, Fred Holabird. Originally, the deep-sea hunters who started searching for the pre-Civil War steamship in the 1980s had their eye on the same prize usually found in pirate chests. 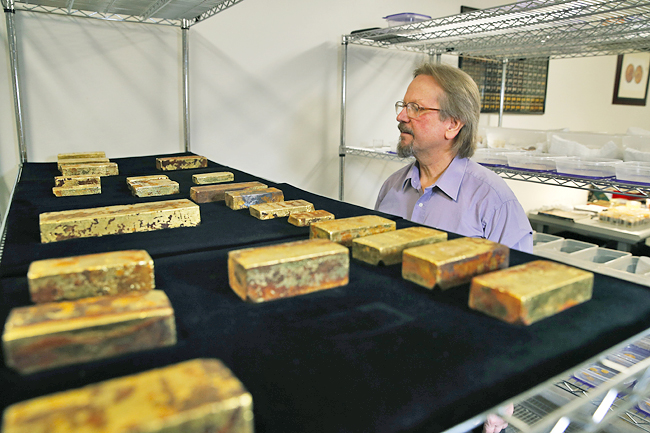 “The goal here was the gold,” Holabird said in an interview last week. “The goal was not artefacts.”

The historical booty includes an 1849 Colt pocket pistol and 1850s paper currency recovered from the purser’s safe; an illustrated 1849 edition of the novel The Count of Monte Cristo; and a metal-plate daguerreotype image of an unidentified woman who became known as the “Mona Lisa of the Deep”.

“Truly refined society and blue collar miners all mixed together,” he said in an e-mail to The  Associated Press.

A longtime deep-water marine archaeologist from St Andrews, Scotland, Neil Dobsen who has excavated wreckages from the 17th Century, said that the SS Central America is his “all-time favourite shipwreck… a window of the past”.

He said it was amazing to think that gold nuggets panned from streams in the Sierra foothills ended up on the bottom of the Atlantic.

In a storage room in Reno, Holabird paused when asked if anything over his 50-year career as a geologist, mine owner, historian and Americana expert compared.

“Nothing,” he said. “And I’ve worked on the best of the best. This is more special, because every piece has a story.”

The discovery of the shipwreck and its treasures is not without drama: there has been a long legal battle in Florida, Virginia and Ohio involving the treasure hunter who first located the wreck. He was accused of bilking investors and has been in federal prison in Michigan since 2015.

The first gold coins and ingots from recovery dives in the 1980s were sold in 2000, with more items from a later recovery sold in 2017. The ship’s bell was donated earlier this year to the United States (US) Naval Academy.

“The 1980s and 2014 recovery trips had all personal effects and cultural treasures held and we just acquired them en masse three years ago,” said managing partner, Dwight Manley of the California Gold Marketing Group, which owns the goods.

Several of the items in the best condition were inside a pair of first-class passenger trunks recovered in 1990 and 1991 with a robot submarine equipped with the first 3D cameras of their kind. The trunks belonged to Ansel and Adeline Mills Eastons, a wealthy newlywed couple from San Francisco, and John Daniel Dement, an Oregon man who had served in the Mexican-American War.

Auction promoters said that the mining pants with a five-button fly in Dement’s trunk were most likely made either by or for Levi Strauss.

Tracey Panek, an historian and director of Levi Strauss & Co’s archives, said in an email to AP on Wednesday that the artefacts from the ship are of interest to the San Francisco-based company “but stories about pants in the Dement’s trunk being made by the company are speculation”.

Holabird, who has done extensive research on the company’s early history, is convinced that they were most likely made by a Levi Strauss subcontractor.

“The buttons are exactly the same – almost identical,” Holabird said. “The pattern’s the same. Heavy cloth. There were no other pants like them.”

And while the pants could prove to be the priciest, the contents of the Eastons’ trunk have fascinated researchers at Ohio State University’s College of Food, Agriculture and Environmental Sciences. The mix of cotton, linen, silk and wool presented a self-contained laboratory for studying the effects of long-term exposure without typical bacterial and biological degradation. Manley called the shipwreck a time capsule of the California Gold Rush.

“These are all first-time offerings,” he said, “unreserved and surely never to be duplicated as there are no missing gold rush ships out there”.