The Ministry of Primary Resources and Tourism (MPRT) held a Nuzul Al-Quran celebration and presentation of donations to orphans at Setia Pahlawan Hall of the ministry yesterday.

The minister also presented donations to 56 orphans of the ministry’s officers and staff. The ceremony ended with a Doa Selamat led by Pengiran Ahmad Faris Ramadhani bin Pengiran Haji Sellahuddin.

This year’s event was hosted by the Department of Agriculture and Agrifood.

A religious talk on ‘Al-Quran: The Basis and Catalyst of National Development’ was delivered by Assistant Prison Counsellor at the Prisons Department Fariszal bin Ali.

The event also saw the presentation of donations to 77 orphans and 26 underprivileged individuals to help ease their burden in the holy month of Ramadhan and in preparation for the upcoming Hari Raya celebration.

The event was jointly organised by the Electricity Authority Brunei Darussalam (AENBD), Department of Electrical Services (DES), and Legal and Compliance Division.

The event also saw the minister present donations to 20 orphans from the ministry
and DES.

The Ministry of Health (MoH) organised a Tedarus Al-Quran ceremony at the Pintu Malim Mosque in Jalan Kota Batu yesterday.

The event began with mass Asar prayers, followed by the recitation of Surah Al-Fatihah led by the minister and verses from Al-Quran. The minister presented a hand held leaf blower and a computer to a mosque representative.

Meanwhile, the Department of Dental Services also organised a Khatam Al-Quran ceremony at the MoH building in Commonwealth Drive yesterday.

The recitation of Surah Adh-Duha until Surah Al-Masad, the Doa Khatam and later Dikir Marhaban were led by Haji Zaman bin Haji Timbang. The event also saw the presentation of donations to orphans of the department’s families.

Ministry of Transport and Infocommunications

The Ministry of Transport and Infocommunications (MTIC) held a Nuzul Al-Quran, Khatam Al-Quran ceremony and presentation of donation to orphans at Amar Pahlawan Hall of the MTIC building yesterday.

This year’s event was jointly organised by the Land Transport Department and Brunei Darussalam Meteorological Department.

The ceremony continued with the presentation of donations to 28 orphans of officers and staff at the MTIC. 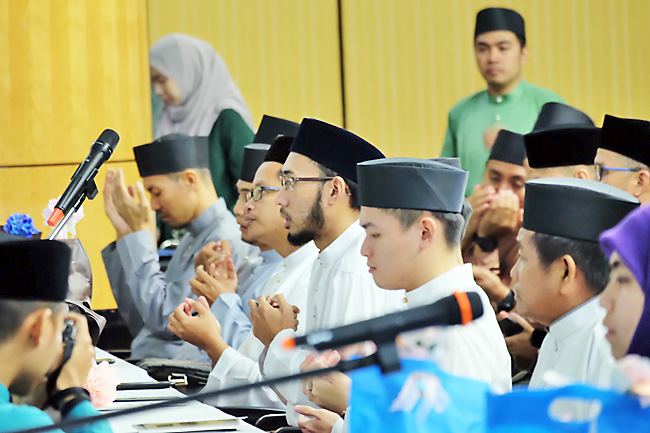