Give new clothes a good washing

CNA – It’s one of those things that few people actually think about and is frequently done (or not) simply according to one’s personal preference and habits. A new piece of clothing is, well, brand new, isn’t it? So why should there be a need to wash it before we wear it?
One assumes that a new garment is clean when it comes fresh out from its cellophane packaging, but is it really?

Just think about what it goes through during production – the fabric may have gone through multiple dyeing and chemical treatments and been run through numerous clothing manufacturing machines.

It may not be used clothing, but it will carry substances like chemical residue, or dust from machines that are utilised in producing them, or even germs and viruses transferred from human hands – since they have been manhandled during the manufacturing process.

Don’t forget that the garments may have been piled in bins and on floors in factory environments that aren’t exactly meticulously cleaned. It’s no secret that the manufacturing of clothing entails the use of chemicals – the only thing we are unsure of is how much is applied in the process.

While that doesn’t necessarily mean that this will do us any real harm in the long term, it tells us that a thorough washing is necessary prior to wearing a new garment for the first time. Chemical compounds can irritate skin and trigger a rash when they come into contact with your body – particularly if you have sensitive skin or suffer from eczema. 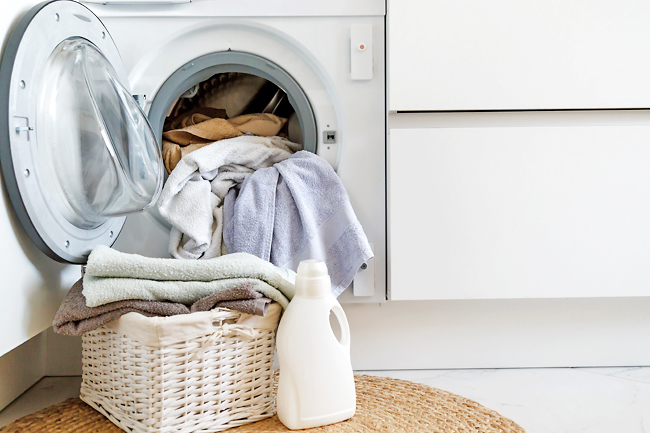 “The trigger of the rash (which may present with eczema or other itchy rashes) may sometimes be due to contact allergy resulting from chemical additives or accessories used on the garment, which can include nickel, latex, formaldehyde, finishing resins, dyes, glues and more,” she said.

Here are just some of the undesirable substances that could still be left on a new garment that you have just purchased: Chemical dyes, fabric enhancers, colour fasteners, anti-wrinkle and stain-resistant agents.

You won’t know what exactly has been used since manufacturers aren’t required to declare the chemicals that have been utilised to process their products, but one can safely assume that some level of these still remain on the clothing that leave the factory.

New garments may appear clean but they actually come from factory environments that are a lot dirtier than most people would imagine them to be.

They may also have stored in boxes for a long time before they are taken out and displayed or sold to customers, which means there also is a possibility of mould or mildew growth that may not always be visible.

It may also be entirely possible that the piece you bought has been tried on by many other customers before you or perhaps was a returned piece. Can you imagine then what could be on the surface of the garment?

The mere thought of this should be enough to convince one to wash every piece of newly bought clothing at least once, we think.

If you buy vintage and second-hand clothes, it’s even more important to thoroughly clean and sanitise them, as they have been worn by others before landing in your hands or are most likely to have been kept in storage for a longer period than brand-new clothes.

Dr Tan noted that because of that, vintage or second-hand clothing may pose an increased risk of secondary bacterial, fungal and parasitic infections as a result of excessive heat, moisture and temperature fluctuations, and recommended that those with sensitive skin or eczema avoid them. If you must buy them, however, be extra thorough about cleaning them.

It’s not complicated – just wash them in your washing machine. For those who’d like a more thorough cleaning, put them through a hot-wash cycle.

If your machine doesn’t come with such a function, soak the clothing in hot water (between 65 to 90 degrees Celsius, which is about the same as a typical washing machine’s hot-wash setting) at least half an hour before washing them with detergent in the machine.

If your new clothes can only be dry-cleaned, send them for professional dry-cleaning. After you collect them, sun them in gentle sunlight for at least an hour or two.

When washing vintage or second-hand clothing for the first time after you acquire them, do keep in mind that it’s best to wash them separately from your other clothes – whether you put them in the washing machine or wash them by hand. For those who want to go a step further, add laundry sanitiser to your detergent when washing these clothes. Most laundry sanitisers on the market claim to remove 99.9 per cent of germs and can also help eliminate mildew and odours.

Of course, there will be some delicate fabrics that may not be able to withstand some of the cleaning methods described above. It’s wise, then, to adjust the intensity or degree to which you employ each of them according to the nature of the garment that you are dealing with. Always check the care label to find out what the fabric’s content is composed of, so that you won’t accidentally damage it.