Frog stows away across continents in banana bag

UPI – Animal rescuers were summoned to a British family’s home when they discovered a tiny frog that stowed away from the Dominican Republic in a bag of bananas.

The RSPCA said Iain Holloway and his family arrived at their Tamworth, Staffordshire, home after shopping at the local Asda store and discovered more than just fruit in a bag of bananas.

“We were unpacking the shopping in the kitchen and my wife turned to me and said, ‘Look, there’s a frog in the bananas,’ and I said ‘Sorry, there’s a what in the bananas?’” Holloway told the RSPCA.

Holloway’s son did research online and identified the 1.5-inch amphibian as a Hispaniolan common tree frog, which hails from the Dominican Republic, the same country in which the bananas originated.

“It was a complete surprise to see this little creature in our kitchen so far from home, and we’ve all had a bit of a chuckle about it since,” Holloway said.

“The little frog was bright and alert and has since been feeding well. The Holloway family did exactly the right thing by not touching the amphibian, given the uncertainty about what sort of frog we were dealing with,” he said. 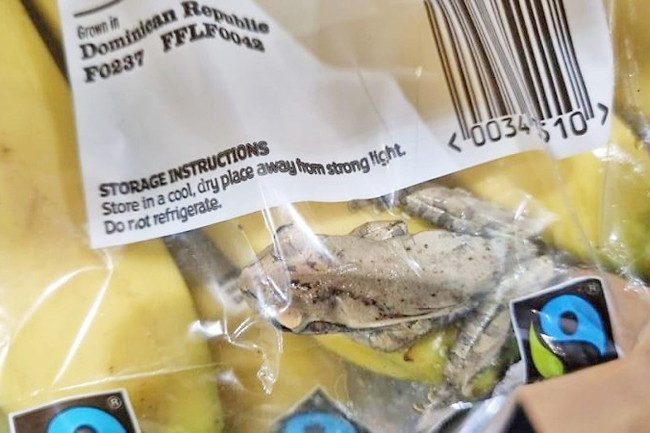