FRD operators on toes with 2,660 calls

The Fire and Rescue Department (FRD) received 2,660 calls between January and June, 168 of which were on structural, car and electrical fires; 155 to seek assistance in clearing debris off public roads; and 214 regarding forest and bush fires.

The agency added that 2,123 distress calls sought assistance in getting out of locked cars and rooms, removing wild animals from residential areas, and rescuing accident victims.

The majority of calls came from the Brunei-Muara District (1,948), followed by the Belait District (382), the Tutong District (252) and the Temburong District (78).

In terms of major building fires between January and June, the losses totalled BND1,767,240.92, while losses from major house fires are estimated at BND1,284,000.

The department also shared that the estimated losses for minor building fires were BND5,710 while for minor house fires, the losses stood at BND4,100.

According to the FRD, among the causes of structural fires were: negligence, such as overloading of extension cables, overloading of phone chargers and overheating; faulty main switchboards, cables, overloading and fuse cut-outs; and human errors such as leaving cooking unattended, bonfires, burning of candles and trash; and children playing with fire. 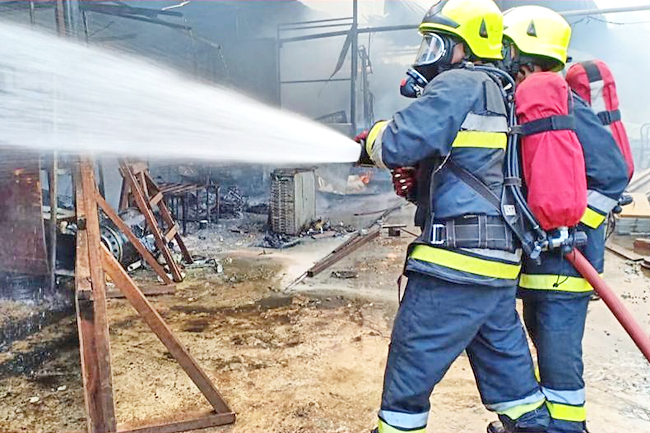 Other causes of structural fires were related to the malfunctioning of air conditioners, washing machines, refrigerators, LED lights and fluorescent lamps; suspicious circumstances and arsons; leakages of liquefied petroleum gas; and natural disaster such as lightning strike, rain and heat wave.

In the same period, the FRD received 106 calls for forest fires and 107 for bushfires, affecting 257.58 hectares of land equalling 103 of football fields.

Based on the statistics, the Brunei-Muara District recorded 55 calls for forest fires and 50 for bush fires, amounting to 49.3 per cent of total cases.

Statistics showed that the Brunei-Muara District recorded 32 vehicle fires, five road collisions and four accidents that caused fires, racking up a total of 41 calls or 70 per cent of the total calls received.

Meanwhile, the department’s community outreach programme has seen a total of 2,764 participants.

Additionally, 142,492 individuals have attended public awareness programmes conducted from 2018 to 2021.