KABUL (AFP) – The death toll from four bombs that ripped through minibuses and a mosque in Afghanistan has risen to at least 16, officials said yesterday, with some of the attacks claimed by the Islamic State (IS) group.

A top United Nations (UN) expert called on Taleban authorities to investigate Wednesday’s attacks, as well as a series of previous deadly blasts that targetted members of the minority Shiite and Sufi communities.

While the number of bombings has dropped across the country since the Taleban seized power in August, several fatal attacks rocked the country last month.

On Wednesday, at least 10 people were killed when three bombs placed on separate minibuses exploded in the northern city of Mazar-i-Sharif, a health official and police said.

Najibullah Tawana, head of the Balkh health department, said three women were among the 10 killed in the blasts.

Hours after the explosions the IS said on Telegram that its “soldiers” were responsible.

Late on Wednesday one other bomb exploded inside a mosque in the capital Kabul, killing six and wounding 18, according to police spokesman Khalid Zadran.

The Interior Ministry said the bomb was placed inside a fan in the mosque.

It was unclear whether Wednesday’s bombings targetted any specific community, and no group has so far claimed responsibility for the Kabul attack.

Dozens of civilians were killed in Kabul and other cities in primarily sectarian attacks during the holy month of Ramadhan, which ended on April 30 in Afghanistan, with some claimed by IS.

Many of those attacks targetted the Shiite Hazaras and Sufi communities. 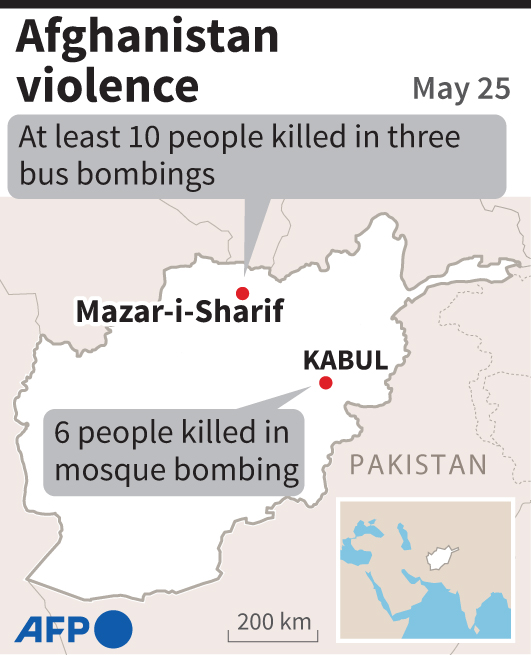