SILVERSTONE, UNITED KINGDOM (AFP) – In a season of technical strife and tension, Formula One united yesterday and saluted the sport’s ruling body and its ‘halo’ device for saving two lives in horrific accidents during the British Grand Prix.

In a spectacular race won by Ferrari’s Carlos Sainz, Chinese rookie Zhou Guanyu survived a high-speed opening lap crash in which he was sent bouncing and scraping upside down across asphalt and gravel into the barriers.

His Alfa Romeo car was severely damaged, but the 23-year-old driver survived unhurt and conscious thanks to the once-controversial ‘halo’ cockpit protection device, made from titanium, which had earlier also saved the life of a Formula Two driver.

Zhou’s remarkable survival, without a scratch, enabled the sport to push aside arguments over ‘ground effect’ technology, bumpy and porpoising cars and mid-season threats of looming rule changes in praise of something more important.

The ‘halo’ was pioneered by the International Motoring Federation (FIA), led by Charlie Whiting, the long-serving race director and safety delegate, who died suddenly at the Australian Grand Prix in 2019.

He overcame opposition from traditionalists, including seven-time world champion Lewis Hamilton and Mercedes team chief Toto Wolff who wanted to retain the purity and danger of open cockpits. 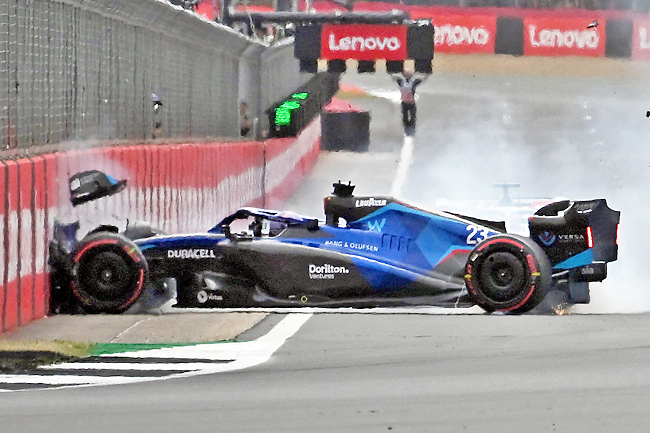 Wolff said he wanted to “take a chain saw” to the device, introduced in 2018, but both men have since changed their views. Before Sunday’s stunning evidence, the ‘halo’ had helped save several other drivers from serious injury or worse in recent years including Charles Leclerc at the 2018 Belgian Grand Prix, Romain Grosjean at the 2020 Bahrain Grand Prix and Hamilton at last year’s Italian event when he collided with title rival and eventual champion Max Verstappen.

At Silverstone, it was Zhou who escaped after being trapped in his car just seconds after the race had started as it landed on its side in the fencing at Abbey Curve.

“I’m ok, all clear,” he tweeted. “Halo saved me today. Thanks everyone for your kind messages.”

Only hours earlier in the F2 race, Dennis Hauger’s car had landed on top of Roy Nissany in another crash, reminiscent of Hamilton’s in Monza last year when Verstappen’s Red Bull vaulted across his Mercedes’ cockpit.

After claiming his maiden F1 victory, Sainz admitted he had initially shut the shocking Zhou accident from his mind during the one-hour delay before the race re-started.

“First of all, I took the decision not to see the accident. When the red flag happened, I knew there must have been a big shunt, but I didn’t watch the TV.

“I was incredibly happy to see Zhou come out of his car without major issues and when I saw what had happened after the race, I was completely shocked.

“It was incredible. The fact he came out of it is crazy. We sometimes criticise the FIA, but you have to give to them how much they have helped us – and the accident in F2 too.

“Today, the FIA saved two lives and we need to give it to them, for the amazing work they are doing in safety… I thank them for this and I love the sport for that.”

Hamilton’s Mercedes team-mate George Russell, whose collision with Zhou at the start instigated the multi-car crash that saw the Chinese sent flying, flipping and barrel-rolling before scraping the ground, stopped and ran over to check on him. “That was a scary incident,” he said. “All credit to the marshals and the medical team for their quick response… It was the scariest thing I’ve seen in my life. It was horrible. He was stuck there and there was nothing I could do.”