For fans of ‘Veep’, Grant Ginder’s new novel is just the thing

THE WASHINGTON POST – Let’s Not Do That Again is a political comedy of manners that reads like the love child of Page Six and a long episode of Veep. I mean this in the best possible way. If you like your humor dark and take guilty pleasure in imagining the messy lives of others, you will enjoy Grant Ginder’s fifth novel.

Our brash, ambitious, Selina Meyer-esque protagonist, Representative Nancy Harrison, D-NY, is a liberal politician of a familiar sort: both likable and not. She may or may not have a heart, but she gets things done. She stood up to Big Oil, fought for universal health care and “to date, has done more to protect the rights of undocumented immigrants than any sitting Democrat”. She is also the longtime president of her Central Park West co-op board and has finally succeeded in gaining approval for a trash-compacting system.

When we first meet Nancy, she’s in the midst of a close Senate race. Her daughter, Greta, has just been captured on video wearing a black Chanel dress and throwing a bottle through the window of a famous Parisian restaurant. It turns out that Greta has taken up with a particularly hideous French nationalist troll who is intent on derailing her mother’s career.

Greta, a privileged type turned impoverished Brooklyn hipster, hawks iPads at the Apple Store on the corner of Flatbush and Lafayette and harbours no small dose of maternal grievance. She may or may not be complicit in trying to dash Nancy’s political hopes.

The novel is peopled with a large cast of characters: an overworked campaign manager, a flirtatious press secretary, Nancy’s long-suffering son, everyone’s various love interests, roommates and colleagues, plus an obscenely wealthy, backstabbing mother-in-law. That the storyline is familiar, and the characters straight out of central casting, does not detract from the novel’s appeal. Note to creative writing students everywhere, particularly the ones shooting for the stylistic moon: What Ginder does so effectively is take a familiar template and claim it as his own. 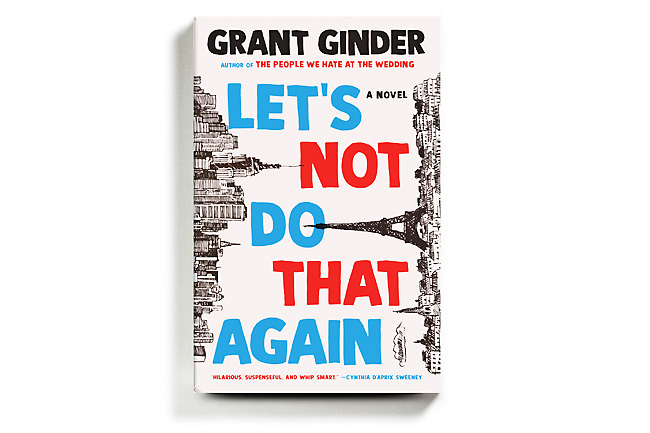 Besides, getting the pieces to fit just right, even in a proven structure, is much harder than it seems. Ginder is a sharp writer, and even his workaday observations turn up countless small gems. A banana does not sit, it languishes. The weather in the city is not just hot, it’s a heat tsunami.

An amusing subplot has Nancy’s son, Nick, working on a musical about Joan Didion, with whom he has an obsession “that falls somewhere between adorable and unhealthy”. The working title for his production about Joan’s New York years is Hello To All That! (An alternative title idea was SLOUCHING.)

Nick, who has recently stopped working as his mother’s speechwriter, is trying to decompress and, accordingly, withdraw from Lexapro. So stressful was the job that he has been on an alphabet soup of anti-depressants and anti-anxiety meds including Ativan, Ambien and Klonopin and “very occasionally, and honestly only when Congress was trying to pass the budget – a little Zyprexa”.

Although Nick is burned out and tired of seeing his mother’s name on the bottom of his paycheck, he had been good at his job. Chuck Schumer knew Nick’s phone number by heart, and, in a line so serendipitously well-timed you could take it to the craps table in Vegas, “at the behest of his mother Nick had made not one but both Cuomo brothers cry”.

Unsurprisingly, Nick’s attempts at reclaiming normalcy are thwarted by the family crisis.

Strong-armed by his mother into reining in his AWOL sister, Nick must put on pause his fledgling romance with his FBI agent boyfriend, Charlie Liu. (That Charlie has a dog named Frank who is “the size of a carry-on suitcase and the colour of charcoal – a black so light it borders on grey, with traces of white around the snout”, is not especially relevant to the plot, but so nicely rendered that it bears mention.)

No plot spoilers here, but let it be noted that pretty much every detail in this novel is there for a Chekhovian reason. Per Anton Pavlovich, every gun that hangs on every wall here eventually goes off. This is true of the black Chanel dress, the trash compactor, even an antique sword that is a keepsake from Nancy’s late husband.

The resolution of the novel is hilariously implausible, but second-guessing authorial choices is what we do in book groups, and it’s part of the fun. Ginder might have ended by sending all of his characters into outer space, and I’d still be recommending this novel.