ASUNCIÓN, PARAGUAY (AP) – Keeping your eye on the ball takes on a new meaning when you consider the World Cup-dedicated collection by Paraguayan artist Lili Cantero.

Decoratively detailing the lavish stadiums of the upcoming tournament in Qatar – the first to take place in the Middle East – as well as the most sought after players and teams, Cantero is preparing the last details of her football-inspired art show, 8 Stadiums, 8 Champions, 1 Dream: Qatar 2022.

“We are going to be exhibiting 25 works in total consisting of boots, football balls, also canvases and 3D structures,” the 29-year-old Cantero said.

Centred on the concept of the No 8, the work aims to highlight the history of the World Cup, which has been won by only eight countries. Brazil has won the most World Cup titles with five, followed by Italy and Germany with four, Uruguay, Argentina and France with two, and England and Spain with one each.

Supported by the Paraguayan embassy in Qatar, in conjunction with the Katara Cultural Village in the Qatari capital, the exhibit “inspired by football, the World Cup, different cultures” will open on November 18 in Doha, two days before the tournament starts. 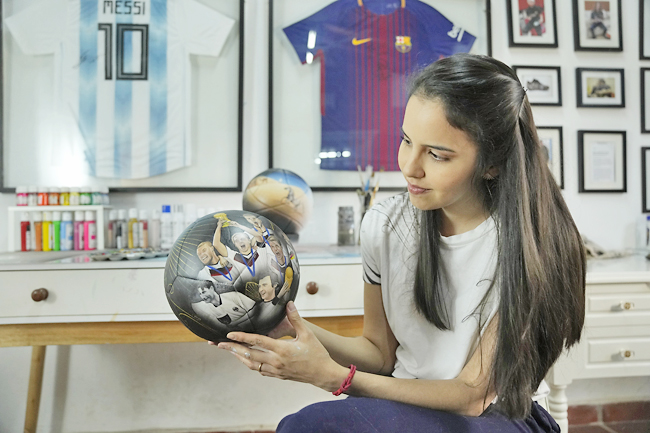 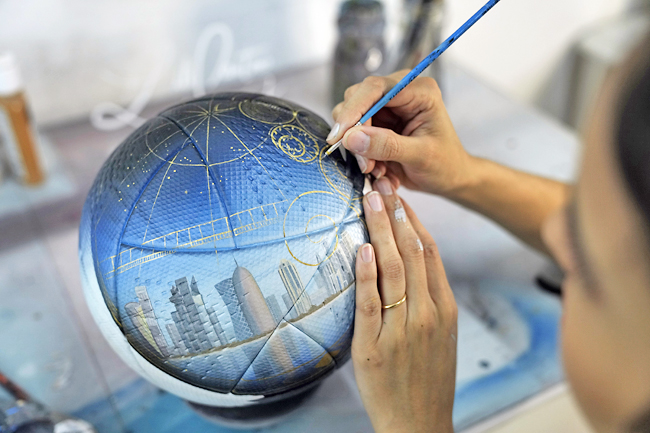 While the hand-painted balls will be at the centre of the show, the adorned football shoes will be presented within a 3D display projecting them onto representations of the World Cup stadiums in Qatar.

They also project the image of Qatari Emir Sheikh Tamim bin Hamad Al Thani, the horse and falcon, and other symbols related to Middle Eastern, Latin American and Paraguayan culture.

Cantero’s talent was thrust into the limelight back in 2018. A pair of football shoes adorned with her art and detailed with a gallery of black and white images of Lionel Messi and his family was sent to the player.

After an image of the Argentina captain posing with the shoes was widely shared on social media, Cantero’s career soared with requests for designs from professional players outside of her native Paraguay, including former Brazil forward Ronaldinho.

She personally got to present the shoes to Ronaldinho illustrating a kiss his mother had given him after winning the Ballon d’Or award in 2005 as the best football player in the world.

“When I paint for players, what I try to do is to look for the humanisation of the figure, because many times the player is like an idol and many people forget that behind that player there is a person,” Cantero said.

An insight into Cantero’s unique take on her sports-inspired muse goes back to her youth. From her atelier on the outskirts of Asunción she remembers flipping through the pages of an encyclopaedia at home, mesmerised by the works of famous painters.

In school, she once decorated white sandals with bright motifs. In college, she painted sandals again as part of an assigned project, where students launched their own small businesses.

By word of mouth, friends who played football began asking her to paint their shoes.

Eventually, she began designing for a local sports store and getting requests from professional athletes.