THE WASHINGTON POST – Among the world’s tallest trees, next to the world’s biggest ocean and along the state’s longest highway, the largest birds in North America are returning to Northern California after a 130-year absence.

In the 1800s, California condors were the heartbeat of the region, soaring higher than any bird – but humans pushed the condors to the brink of extinction. Now, the Northern California Condor Restoration Programme, the native Yurok Tribe and government agencies have introduced a program to blend the species back into the natural landscape of the Pacific Northwest over the next two decades.

A California condor (Gymnogyps Californianus) sounds almost mythical: A bird larger than any person. Teeth that can rip through whale flesh. Yet a gentle conservator that does not kill, but rather feeds on animals that are already dead.

The California condors’ vast wingspan helps them soar up to 15,000 feet without flapping for long periods. They can cover up to 150 miles in a day to search for food and soar up to 50 miles per hour. Some Indigenous tribes believed the birds brought thunder when they flapped their enormous wings, earning them the nickname “thunderbird.”

1904 marked the last reliable report of a condor north of San Francisco. Researchers say the population declined due to lead poisoning, which was caused by ingesting fragments of lead ammunition in carcasses killed and left by hunters, as well as habitat destruction and poaching.

By 2007, conservation groups with the California Condor Recovery Program successfully introduced 144 condors around the southern coast. That same year, the Yurok Tribe Council passed a resolution to create a reintroduction site in Northern California – but they needed to find a suitable location.

The Yurok Tribe and government partners drafted a plan to release condors into Redwood National Park. The towering old-growth coastal redwoods provided ample space for them to nest and rest, while the birds could forage in vast open prairies. Consistent winds also help the birds glide for extended periods and reduce energy spent flapping their large wings. 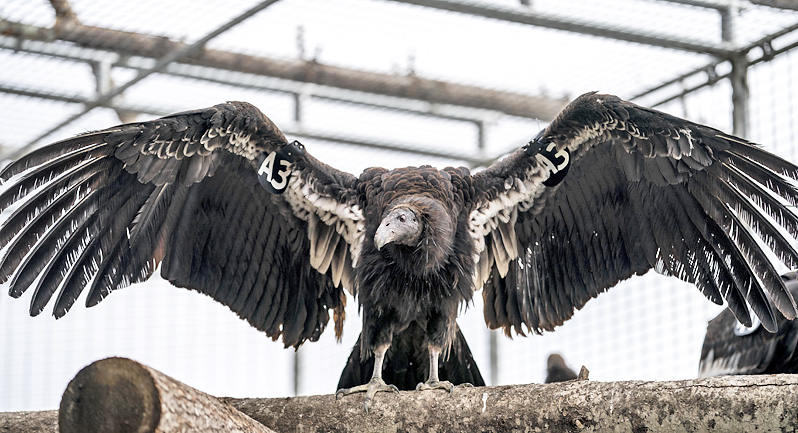 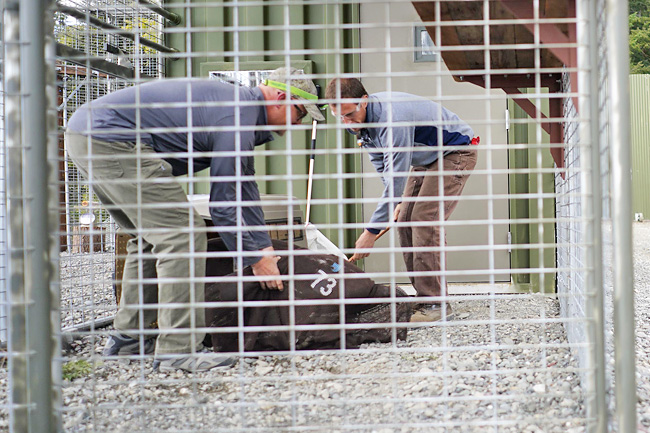 The Yurok Tribe received four California condors from the Oregon Zoo and World Center for Birds of Prey in Boise, Idaho. While the condor release facility was under construction in Redwood National Park, the birds spent several months at a sanctuary in San Simeon under the care of biologist Joe Burnett and his colleagues at the nonprofit Ventana Wildlife Society, which restores endangered species in central California.

“I’ve always just listened and watched their behaviour and kind of let them guide me,” said Burnett, who has released nearly 200 condors into the wild. “I’m continually learning more about how they tick, how they work, how they survive out in this environment.”

Burnett and his colleagues at Ventana Wildlife Society and zoo veterinarians drove the birds hundreds of miles for transfer to the Yurok staff at the newly minted release facility in Redwood National Park.

While transferring the birds out of their crates, one condor nipped the finger of Chris West, a senior biologist with the Yurok Tribe Wildlife Department.

Once the birds were out of the crates, the crew, along with veterinarians from the Oakland Zoo, performed health checks, such as measuring white blood cell counts, heart rates and lead exposure. The condors also received identification tags on their wings, labelled with local tracking numbers, A0, A1, A2 and A3.

The Yurok, who characterise the condors by their kind-heartedness and sense to renew the Earth, also gave each bird a Yurok name at the time of release: ‘Hlow Hoo-let’ (translated to “at last I or we fly!”), Ney-gem’ ‘Ne-chween-kah (“she carries our prayers”), Poy’-we-son (“the one who goes out ahead”) and Nes-kwe-chokw’ (“he returns”).

“They want to be free. Their job is to keep our prayers going and to keep our [environment] clean. It’s not just to be a bird,” said a Yurok Tribe elder and a founding member of the tribe, Susie Long. The Yurok use fallen feathers in cultural ceremonies, as the condors carry their prayers toward the heavens.

For the next several months, staff at the facility logged the birds’ behaviour throughout the day and night in a notebook, describing their eating habits and social bonding in the form of ‘cuddle puddles’ and play.

Finally, the time came to release the first two condors into the wild.

A3 inched his way to the open gate and then pushed off, like a child diving into the deep end for the first time. A2 was a little more hesitant, standing at the open gate for a few seconds before following his companion in flight.

As the condors took their first flight among the redwood trees, hundreds of people logged on to the Yurok Tribe’s live stream of the release. Yurok tribe members, friends from Ventana Wildlife Society and zoos as well as bird nerds from near and far rejoiced as the first condors entered Northern California in more than a century.

As of July, all four condors in the first cohort were reintroduced back into the wild in Redwood National Park. Four more condors have entered the pens, waiting for their time to take off and join their friends. The Yurok Condor Restoration Programme plans to release four to six birds per year for the next 20 years.