THE WASHINGTON POST – As a medical student in Richmond, Virginia, Eleanor Love showed up to as many wedding venues as possible, even when she didn’t know the bride and groom.

She would call their wedding coordinators and ask if she could stop by after their big day, and they almost always said yes.

Love, now a Virginia-based doctor, knows that weddings create a lot of leftover flowers – and that means more opportunities for her to collect after-wedding bouquets and centrepieces and give them to her lonely hospital patients, many of whom don’t often get visitors, let alone expensive flowers.

The flowers are still in good shape, and the patients are overjoyed to have them, she said.

“I just broke down and I cried,” recalled patient Connie Melzer, who was recovering from a heart condition at Virginia Commonwealth University (VCU) Medical Centre in Richmond when Love walked into her room with a bouquet in early 2020.

“When you’re there six to eight weeks, it’s a big deal,” said Melzer, 68, of Hampton, Virginia. Love, 27, who recently graduated from Virginia Commonwealth University School of Medicine and is doing a general residency at Riverside Regional Medical Center in Newport News, Virginia, decided on the idea while working at the VCU hospital as a medical student and was interacting with patients who were severely ill. 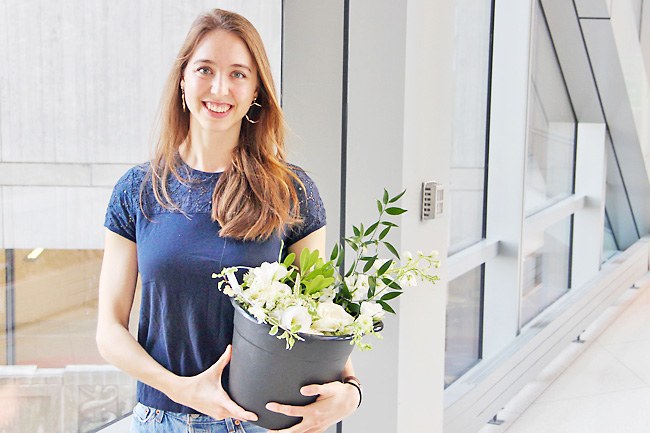 She wondered how she could help alleviate their suffering aside from learning how to treat them as a student doctor.

“One of the challenges of being a medical student is that it can be very difficult to contribute to the care team,” said Love, who grew up in Arlington, Virginia. “You are there primarily as a learner, but you want to make an impact on your patients, and you don’t have the same knowledge as physicians.”

Love thought: “How can I at this stage in my training make an impact on patients?”

So in 2019, she started The Simple Sunflower in Richmond, and so far has delivered more than 760 bouquets to patients at VCU Medical Centre. She brought fellow students and other people into her project, and now has more than 200 volunteers on the email list. She said the idea is not new, and other cities across the country have similar programmes.

When Love began the project, she called businesses such as wedding venues and florists and asked them what events were scheduled. She then reached out to brides and grooms through event coordinators to ask them if they had plans for their flowers after the big day. Most often, Love said, they didn’t.

For each wedding, she assembles a team of eight volunteers who help pick up the flowers when the party was over, then spend time repurposing them into vases for individual patients.

Once the Simple Sunflower got going, volunteers would deliver flowers to 20 to 40 patients on a typical Monday.

Volunteers who were not part of after-wedding pickups would help by donating money or vases. Things slowed dramatically in the pandemic, but the Simple Sunflower is back in business now that wedding season is roaring again.

People beyond the VCU community have heard about Love’s project and gotten involved.

“Once the word got out, folks started reaching out to us,” Love said.

Love said the project is a fit for her because she has a lifelong appreciation of flowers and gardening, which she got from her mother. As a child, she preferred doing outside chores at her family’s Northern Virginia house and garden, which had beautiful rhododendrons.

Love recalled her father taking her to a garden store and letting her pick a seed packet. She chose sunflower seeds and planted them – and years later, she chose the Simple Sunflower as the name for her group. She is currently working to get the organisation non-profit status.