BANGKOK (AP) – Southeast Asian leaders convene in the Cambodian capital today, faced with the challenge of trying to curtail escalating violence in Myanmar while the country’s military-led government shows no signs of complying with the group’s peace plan.

United States (US) President Joe Biden will be on hand for the Phnom Penh ASEAN summit.

It sets the stage for the Group of 20 (G20) meetings in Bali, Indonesia, that immediately follow and are expected to include Chinese President Xi Jinping and possibly Russian President Vladimir Putin, then the Asia Pacific Economic Cooperation forum in Bangkok.

In addition to Myanmar, the four-day meetings are expected to focus on pandemic recovery issues, regional trade and climate change.

Neither Xi nor Putin is expected to attend the ASEAN talks or the parallel East Asia Summit, though both China and Russia are thought to be sending high-level delegations headed by Prime Minister Li Keqiang and possibly Foreign Minister Sergey Lavrov.

Looming large over ASEAN, the G20 and APEC are the war in Ukraine, and the resulting supply chain, energy and food security issues, as well as rising tension in the Korean Peninsula. 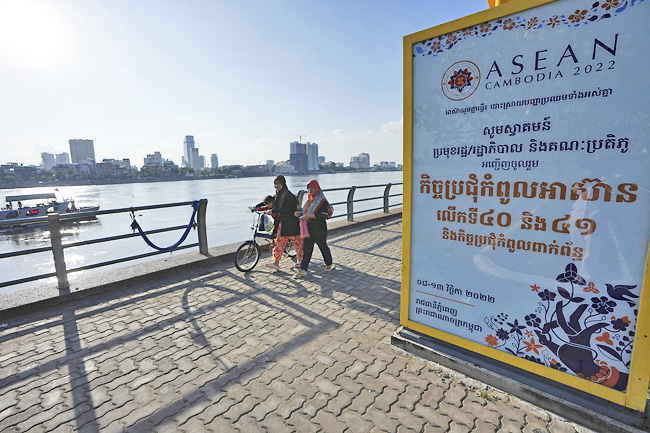 By attending the ASEAN summit in person, Biden will be able to push American interests and also visibly demonstrate Washington’s renewed commitment to the region, said expert with Malaysia’s Institute of Strategic and International Studies Thomas Daniel.

Former US president Donald Trump skipped the summits after 2017 and left the 2017 meetings early, before the plenary session of the East Asia Summit, a key regional strategic dialogue, leaving then-Secretary of State Rex Tillerson to stand in for him.

“For Southeast Asia it’s really important to physically show up, and I think the Americans are very aware of this,” Daniel said. “I cannot emphasise how much damage was done by the Trump administration not showing up – and it’s not just not showing up, it’s sending representatives that are seen as just further downgrades.”

Ahead of the summit, US assistant secretary of state for East Asian and Pacific affairs Daniel Kritenbrink said the talks would be an opportunity to work on a “broad range of diplomatic priorities across the region” and to focus on “carrying out everything we’ve promised rather than coming forward with another long list of new initiatives”.

“A high-level US presence at these summits will demonstrate our strong and enduring commitment to the region,” he said at a late October roundtable hosted by Washington’s Center for Strategic and International Studies.

“From the president to the secretary of state, throughout the entire US government, we know that America’s future security and prosperity are entirely dependent on what happens in the Indo-Pacific,” he said.

Cambodian Prime Minister Hun Sen, whose country has the rotating chairmanship of ASEAN, has invited Ukraine to participate in the summit and the country’s foreign minister met with Hun Sen ahead of the event yesterday.

Hun Sen’s office said he spoke with President Volodymyr Zelenskyy by phone at the start of the month, and that the Ukrainian leader had requested to address the summit by video, but it was not immediately clear if that had been approved.

He added that the US would talk with ASEAN nations about additional steps to put pressure on Myanmar’s regime to push it to stop the killings and move toward a democratic path.

“We are not going to sit idly by while this violence continues,” Kritenbrink said.

ASEAN, which includes Myanmar, has tried to play a peacemaking role since shortly after the country’s military ousted the elected government of Aung San Suu Kyi and seized power in February 2021.

At a special meeting at the end of October, the foreign ministers of ASEAN’s other members – Cambodia, the Philippines, Malaysia, Indonesia, Laos, Singapore, Thailand, Vietnam and Brunei – acknowledged their efforts to bring peace hadn’t succeeded and called for “concrete, practical and time-bound actions” to support the implementation of its five-point peace plan.

It calls for the immediate cessation of violence, a dialogue among all parties, mediation by an ASEAN special envoy, provision of humanitarian aid and a visit to Myanmar by the special envoy to meet all sides.

Myanmar’s government initially agreed to it but has made little effort to implement it, aside from seeking humanitarian aid and allowing ASEAN’s envoy, Cambodian Foreign Minister Prak Sokhonn, to visit.

But it refused to allow him to meet with Suu Kyi, who was arrested and is being tried on a variety of charges that critics say are meant to sideline her from politics.

In response, ASEAN has not allowed Myanmar’s leaders to participate in its official meetings, and Myanmar has rejected the idea of sending non-political representation to the summit, though working-level officials have joined some pre-summit meetings.

ASEAN foreign ministers in August concluded a meeting with a joint statement criticising Myanmar for its lack of progress, but little more, deciding to instead leave the issue for the leaders to decide in Phnom Penh.

It could be, however, that the leaders also choose to wait until Indonesia, which has taken a tougher stand on Myanmar, takes the chair of the bloc in 2023, before taking more decisive action.