Fight to the end

SARAJEVO, BOSNIA-HERZEGOVINA (AP) – It took a decade of court battles and street protests, but Balkan activists fighting to protect some of Europe’s last wild rivers have scored an important conservation victory in Bosnia.

A new electricity law, which passed on Thursday, bans the further construction of small hydroelectric power plants in the larger of Bosnia’s two semi-independent entities. Still, the new law only highlights the long road ahead to protect such rivers across the entire Balkans from being degraded, diverted and commercialised by people with connections to the region’s corruption-prone political elite.

“This is extraordinary. It will become the role model for other European countries, I am sure,” said Ulrich Eichelmann of the Vienna-based conservation group River Watch and coordinator of the Save the Blue Heart of Europe campaign to protect the entire network of wild Balkan rivers.

Since it was launched in 2013, the campaign has brought together environmental activists, conservation groups and local people to jointly fight for protection of what it calls “one of the most important spots for European biodiversity”. It said the Balkans has over 28,000 kilometres of waterways in pristine or near-natural state, with “extensive gravel banks, untouched alluvial forests, deep gorges, spectacular waterfalls and even karstic underground rivers”.

Overall, more than 2,700 large and small hydropower plants are projected to be built on these Balkan rivers, including some inside national parks. 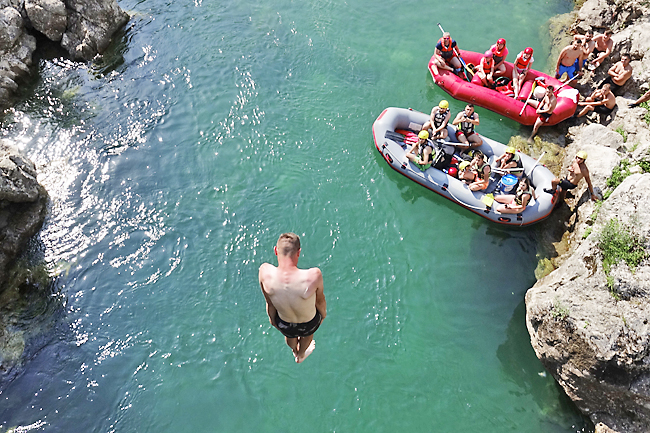 Bosnia alone has 244 rivers and had plans to build over 350 hydropower plants with the installed capacity of up to 10 mW – or more than one on every waterway.

“This whole business with small hydropower plants began some 15 years ago when investors started visiting villages and promising prosperity to the local people,” explained Lejla Kusturica, a prominent Bosnian river conservation activist. In their telling, she added, “Rivers were supposed to be prettified, we were supposed to generate significant quantities of clean electricity and local communities were promised it will all benefit them greatly.”

Instead, Kusturica said, investors begun trapping rivers and diverting them by pipe, taking away water used daily by locals and wildlife, eroding and degrading nearby forests.

Undeterred, the authorities offered investors public subsidies and fixed above-market prices for long-term contracts, arguing that this would help Bosnia reduce its dependence on coal and speed up its transition to renewable energy.

But following a construction boom that saw 110 small hydropower plants built in Bosnia, people from across the ethnically divided country begun arguing that these projects were in fact harmful for both the environment and their livelihoods.

Residents of Bosnia’s riverside villages and towns spontaneously started mobilising against the small hydroelectric plants, documenting their destruction of nature, analysing official statistics on their alleged economic contributions and launching court challenges against the permits authorities continued to issue for new projects.

The resistance included peaceful, at times months-long, sit-in protests on roads and bridges to prevent investors and their heavy machinery from accessing the rivers. At times, local authorities used violence to disperse the activists.

Still, a grassroots river protection movement gradually captured broad popular support in Bosnia and abroad, especially after it disclosed that numerous contracts for the commercial exploitation of rivers were awarded to the politically connected.

“People stood up against investors on their rivers. They were not knowledgeable people, they were no ecological experts or scientists, they were ordinary people that live next to a river,” Eichelmann said.

According to official data in Bosnia, painstakingly collected by activists, the owners of small Bosnian hydropower plants over the past decade have been raking in millions of euros in subsidies while paying minuscule concession fees, typically between one to three per cent of their income.

In the meantime, the promised transition to renewable energy never really materialised. In 2021, Bosnia’s small hydropower plants contributed only just over 2.5 per cent of the nation’s electricity.

The battle has been especially fierce along the Neretva River, a cool, emerald green 255-kilometre waterway that is a popular destination for rafters, fishermen and hikers. Before emptying into the Adriatic Sea in Croatia, the river and its tributaries run through both parts of Bosnia.

At first, stopping the commercial exploitation of Neretva and its tributaries, where 67 new small power plants were originally planned, appeared impossible, as it required deep knowledge of the different and sometimes conflicting laws in Bosnia’s two administrative parts.

But unlike any other issue in Bosnia since the end of its brutal 1992-95 war, the opposition to commercial exploitation of the free-flowing rivers has brought people of different ethnic backgrounds together. So far, the activists fighting for the Neretva River basin have stopped or delayed the construction of 56 hydropower plants.

While villagers were physically blocking access to the rivers for construction crews, teams of legal experts and scientists have been challenging those permits in the courts. In about a dozen cases, Bosnian courts said authorities had failed to uphold the requirement to consult with local communities, protect nature conservation areas and demand environmental impact studies from investors before consenting to their plans. The court said authorities also failed to properly inspect the construction and operation of the plants.

Activists were especially pleased to prevent the construction of two small hydropower plants at the confluence of the Buna and Neretva rivers, a stunningly beautiful conservation area that provides habitat for the soft mouth trout, a species endemic to the Western Balkans.

In numerous other cases, however, authorities allowed construction projects to proceed despite successful legal challenges.

Lawmakers in Bosnia’s other semi-autonomous part, Republika Srpska, responded to public pressure this year by halting subsidies for new plants with a capacity of over 150 kW, rather than with an outright ban. At the same time, some municipalities in Republika Srpska have distanced themselves from the small hydropower projects.

Yet even Thursday’s conservation win has its limits. The new electricity law gives existing concession holders three years to obtain necessary permits and the approval of local communities for their projects to proceed. This has sparked fears that the investors and local authorities will again find ways to bend the rules.

“We proved in court that this is a nature conservation area and that by law no construction is allowed here,” said Oliver Arapovic, 48, who spent eight years fighting to protect the confluence of Buna and Neretva rivers.