CNA – When the F-16 fighter jets soared across the skies in the National Education show in July this year, a boy on the ground looked up and saw a world of possibilities.

Nikhil Anand, who had a fear of heights, had not been remotely interested in flying before then.

But in August, his plans took off. The Secondary 3 student from Greenridge Secondary School chanced upon an Instagram ad by private flight school SG Aviators Academy on a course that would allow him to fly a plane by himself at 15.

It was the First Solo Aeronautical Rating course – and he could start theory lessons first even before he turned 15, which is the minimum age required to fly solo in Australia.

Course participants attempt their first solo flight in Bunbury, Perth at the end.

“It’s the fact that I can learn how to fly and control the plane by myself. It looked quite interesting what they had accomplished. Coincidentally, my father also showed me the same course. So I just went for it,” he told CNA.

Just over two months later in early November, the Singaporean successfully flew his first solo flight in a Tecnam P2002. He had turned 15 only eight days earlier. 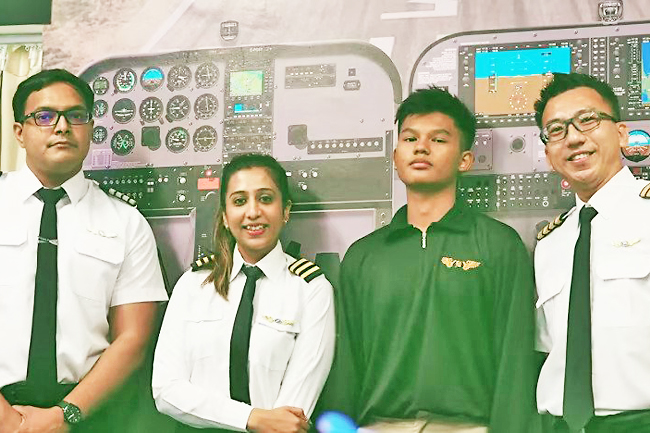 DOING IT FOR HIMSELF

His passion had been ignited, but Nikhil’s journey to earn his wings began with scant knowledge about planes.

All he knew about flying was gleaned from regular visits to Changi Airport with his family, following the Singapore Youth Flying Club on Instagram and watching TV shows and movies about flying, such as Top Gun. He hadn’t even studied related subjects in school.

“I was ready to learn how to fly a plane, but I was also nervous. Upon my own research, I saw that it was harder than I had expected it to be,” he said.

Over 40 hours of ground training, 10 hours of simulator training and an hour-long flying session in a plane with an instructor at Seletar Airport, the course gears participants up for their first solo flight at the Bunbury Aero Club in Bunbury, Perth in Australia.

In Bunbury, participants then practise flying with an instructor by their side before they are ready to attempt their first solo flight. The number of hours needed depends on each participant.

The first stage in Singapore costs SGD3,950, while the second stage in Australia costs SGD3,500. With school in the day, Nikhil attended theory and flight simulator lessons twice a week in the evenings.

His father, Vijay Anand, recalled being honest with Nikhil about the “very short time” he had to “be someone at the age of 15 to fly solo” when he started the course in August.

To achieve this goal, he would have to be in Australia by early November.

Vijay, a 49-year-old manager of a construction firm, admitted it was his own dream to once be a pilot that propelled him to do his research and recommend the course to his son. But he made sure Nikhil had the passion too.

“I’m the one bringing him to the course, so along the way from home, we will talk. I’ve always asked him, ‘Are you sure you want to do it? Are you ready? Do you enjoy flying the simulator?’ He gives me the feedback that his interest is building up along the way,” he said.

Even though he was “a catalyst to give him the exposure or the direction”, Vijay pointed out that whether his son chooses flying as his lifelong career is his decision. But as a parent, “this is an opportunity which I can do for him now, so I’ll do it”, he said.

His wife, Shanthi Govindasamy, also wanted to ensure her son was taking the course for himself.

“I don’t want him to pick up something just because we mentioned it to him. I kept telling (my husband) that Nikhil has a fear of heights and maybe we should find out what exactly he wants to do,” the 47-year-old educator said.

Then she recalled her son had started to like rollercoaster rides, and even expressed interest in the fighter jets during the National Education show that she attended with him.

“I had asked if he was thinking about flying, and he said, ‘Yeah, I think I don’t mind.’ So I told him I thought he had a fear of heights, and he said, ‘I think it’s okay.’ I was picking up these kinds of clues… and that’s when I realised he’s ready for it,” she said.

“I didn’t want to place too much expectations on him. I just wanted him to enjoy the experience. So to me, I was totally okay with whether he succeeds or not. What’s most important is the experience of the learning process.”

As such, it was important for Shanthi to mentally prepare her son for the possibility that things might not go the way he hoped, and that this was not the only avenue to nurture his newfound passion.

“There’s no such thing as you want something and can immediately achieve it. There will be many failures along the way. But what you need to know is you need to have the values and the resilience in order to ride the wave,” she said.

Sitting in the cockpit proved “very different” from sitting in class or the flight simulator for Nikhil. “In the seat, I was quite nervous. When you learn the theory (versus) when you go there, it’s quite a change. So when you fly the plane, it feels very different compared to what you expect,” he recalled.

“I expected it to be quite smooth; I didn’t really think much about the weather or the winds. I thought it was like playing a game, but it was not that simple. Sometimes the winds can be gusty, so your plane will be bumping up and down. It may be harder to control because you are getting resistance from the wind, so the plane might take awhile to receive your movements.”

But he was “a smart kid” so it was easy for flight instructors at SG Aviators Academy to teach him, they told CNA. Nikhil is the youngest pilot to have flown solo under the school – and the school believes he is also the youngest from Singapore to have achieved the feat.

To help students internalise what they learn in flight school, lessons were “designed in a way to coincide with the (mainstream) school curriculum”, such as by helping them to understand why they learn science and mathematics, said the school’s principal Captain Saravanan Sukomaran.

The simulator training then helps students practise their emergency procedures under all kinds of scenarios before they take to the skies, added flight instructor at the school Dr Ace Yip.

“For example, like engine fire or after takeoff, you have engine failure… There’s a lot of things that you need to multitask along the way. You need to fly the aircraft, communicate with the tower and at the same time, make the decision on what to do next,” he said.

“We try to induce it into muscle memory. There’s really no time to think what you need to do next. You just know there’s this situation and where your hands need to go, where your legs need to go (for you to) fly the aircraft and get it back down safely.”

After all, as a pilot, “if you close your eyes, you need to know where the throttle is, where your elevator is and what you are doing”, added fellow flight instructor Nidhi Rathod.

“What you want to see in the simulator is the same in real life, like the gap between the horizon and the dashboard of the aircraft,” said the flight instructor who was by Nikhil’s side during the simulator training.

During the final simulation lesson, Nikhil was assessed by Captain Saravanan.

“(Captain Saravanan) is seeing if (Nikhil) is able to reproduce the procedures, the work cycle, and basically look after the right stuff. If he’s able to emulate what we showed him before and what we prepared him for, then the captain signs him off,” said Yohan.

Once students are put into an actual plane at Seletar Airport before their solo flight in Australia, “they are able to see what they have learnt and apply in practical aspects”, then “their adrenaline level goes up”, added Captain Saravanan.

After a few practice rounds, Nikhil soothed his nerves – and his mother’s.

In the leadup to Nikhil’s first solo flight, Shanthi was a ball of nerves. She remembered asking if her teenage son knew how to manage the plane and whether he was familiar with the landmarks.

“I kept telling myself, he’s going to have 10 hours of flight (training) over in Australia. By the time they keep flying the same circuit, he will be familiar with the grounds,” she recalled with a nervous laugh.

The school had booked 10 hours for Nikhil to practise with an instructor before attempting his first solo flight. “Nikhil was reassuring me, while I was trying to see whether he’s mentally ready,” she added.

“I asked my husband, ‘You sure there’s not going to be an instructor?’ I’m totally fine if there’s an instructor when he’s flying. But he has not even driven a car in Singapore… and on land you can stop the car, but in the air, you can’t. I had many apprehensions like that.”

Shanthi was further reassured by her husband that the instructors at Bunbury Aero Club would know how to assess whether Nikhil was ready. If he wasn’t ready, they would not let him fly. “I told myself in no way should I let my fear be a barrier to his progress. So that’s where I had to let go,” she said.

“As a parent, it’s a learning experience for myself to have faith in your child that they are old enough to teach you. There are times when we have to be the child and they are the parent.”