‘Ferocious’ Kambosos vows to ‘shock the world again’ against Haney

MELBOURNE (AFP) – Australian George ‘Ferocious’ Kambosos yesterday vowed to “shock the world again” against American favourite Devin ‘The Dream’ Haney when they meet in a hotly-anticipated clash to become the undisputed lightweight champion.

Both fighters are unbeaten heading into their blockbuster showdown in front of an expected 50,000 fans at Melbourne’s Marvel Stadium tomorrow, with the WBA, IBF, WBO and WBC belts all on the line for the first time in modern boxing history.

“It’s been a long, hard journey, everyone knows that, but I’m ready for tomorrow and I will shock the world again,” said Kambosos, 28, in his pre-fight press conference. “Underdog, beautiful, we’re ready.

“I’ve been through it all and whatever comes to the table, I’m ready, fully prepared. We’re (his team) a warrior,” he added.

Kambosos, who honed his craft as a former sparring partner of the great Manny Pacquiao, defeated Lee Selby in London in 2020 to earn a crack at WBA, IBF and WBO champion Teofimo Lopez at Madison Square Garden in November, and grabbed his chance with both hands. 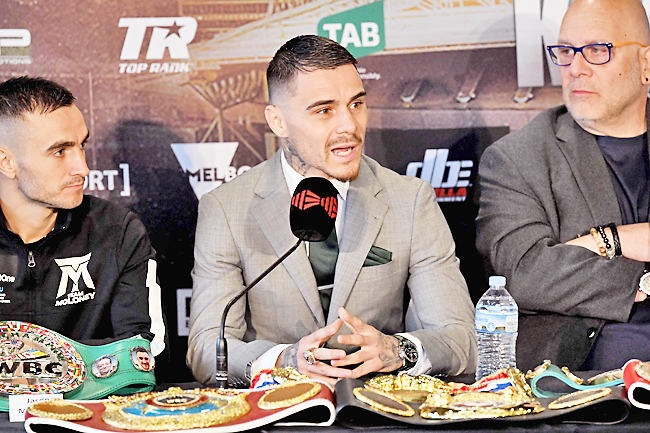 In a close and bloody slugfest, he upset the American in a stunning split decision victory as a heavy underdog to leave him with the three 135-pound straps.

Sydneysider Kambosos had originally been in talks to fight Vasiliy Lomachenko in his first title defence, but the plans fell through when the Ukrainian opted to stay in his homeland after Russia invaded.

Instead, the opportunity came to Haney, who easily defended his WBC lightweight title for a fourth time in December, winning by a unanimous decision over challenger Joseph Diaz in a 12-round clash in Las Vegas.

San Francisco-born Haney goes into the bout as the bookmakers’ favourite but with one big disadvantage – his father and lead trainer Bill will not be ringside after being denied a visa to Australia over a three-decade-old drug conviction.

But he is unperturbed and fired up to take all four belts back to the United States.