KHERSON (AP) – A hand grenade jerry-rigged into the detergent tray of a Kherson home’s washing machine. A street sign maliciously directing passers-by towards a deadly minefield. A police station that allegedly housed a torture chamber but remains so booby-trapped that demining crews can’t even start to hunt for evidence.

Sunday marks exactly one month since enemy troops withdrew from Kherson and its vicinity after an eight-month occupation, sparking jubilation across Ukraine. But life in the southern city is still very far from normal.

The departing troops left behind all sorts of ugly surprises, and their artillery continues to batter the city from new, dug-in positions across the Dnieper River. The regional administration said on Saturday that shelling over the past month has killed 41 people, including a child, in Kherson, and 96 were hospitalised.

Residents’ access to electricity still comes and goes, although water is largely connected, and indoor heating has only very recently been restored – and only to about 70-80 per cent of the city after the enemies last month blew up a giant central heating station that served much of the city.

For authorities and citizens, sifting through the countless headaches and hazards left behind by the enemies, and bracing for new ones, is a daily chore. 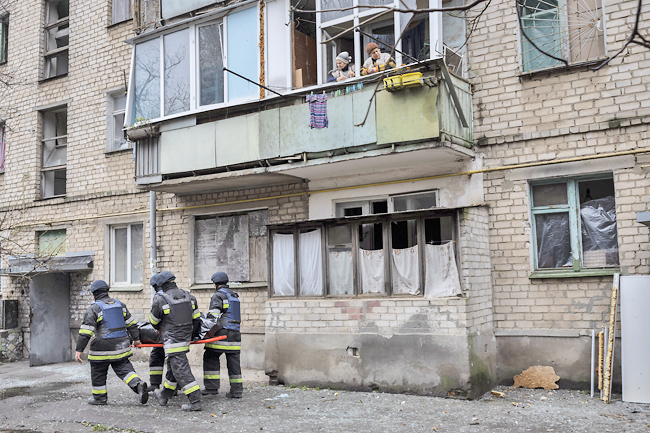 On Friday alone, according to the local affiliate of public broadcaster Suspilne, enemy forces shelled the region 68 times with mortars, artillery, tank and rocket fire. Meanwhile, in the last month, a total of 5,500 people have taken evacuation trains out, and work crews have cleared 190 kilometres of road, Suspilne reported.

When aid trucks arrived a month ago, war-weary and desperate residents flocked to the central Svoboda (Freedom) Square for food and supplies. But after a missile strike on the square as a line of people queued to enter a bank in late November, such large gatherings have become less common and aid is doled out from smaller, more discreet distribution points.

Regional officials said some 80 per cent of Kherson’s pre-war population of about 320,000 fled after the enemies moved in, days after their invasion began on February 24. With some 60,000-70,000 residents remaining, the city now has a feel of a ghost town. Those who remain mostly keep indoors because they’re cautious about making forays into the streets.

“Life is getting back to normal, but there is a lot of shelling,” said Valentyna Kytaiska, 56, who lives in the nearby village of Chornobaivka. She lamented the nightly “Bam! Bam!” and the unsettling uncertainty of where the ordnance may land.

Normal is a relative term for a country at war. There’s no telling whether what the enemy insists on calling a “special military operation” will end in days, weeks, months or even years.

In the meantime, painstaking efforts go on to establish a better sense of normalcy, like clearing the mess and mines left behind by the enemies, in tough wintertime weather.

“The difficulties are very simple, it’s the weather conditions,” said one military demining squad member, who goes by the nom de guerre of Tekhnik. He said some of their equipment simply doesn’t work in frost conditions “because the soil is frozen like concrete”.

The deployment of additional teams could help ease the heavy workload, he said. “To give you an idea, during the month of our work, we found and removed several tons of mines,” said Tekhnik, adding that they focussed only on about 10 square kilometres.

In Kherson’s Beryslavskyi district, a main road was blocked off with a sign reading “Mines Ahead” and rerouting passersby to a smaller road. In fact, it was that side road which was mined, and cost the lives of some military deminers. A few weeks later, four police officers were also killed there, including the police chief from the northern city of Chernihiv, who had come down to help Kherson regain its footing.

The general state of disrepair of weather-beaten roads helped the outgoing troops disguise their deadly traps: Potholes, some covered with soil, provided a convenient place to lay mines. Sometimes, the enemies cut into the asphalt to make holes themselves.

Demining squads go slowly house-to-house to ensure it’s safe for owners or previous residents to return. Experts say a single home can take up to three days to be cleared.

One crew turned up a hand grenade in one house, stuffed into a washing machine – the pin placed in such a way that opening the detergent tray would set off an explosion.

The city’s main police station, where detainees were reportedly tortured, is packed with explosives. When demining squads tried to work their way in, part of the building exploded – so they’ve shelved the project for now.

Longer term questions remain: Kherson sits in an agricultural region that produces crops as diverse as wheat, tomatoes, and watermelon – a regional symbol. The fields are so heavily mined that about 30 per cent of arable land in the region is unlikely to be planted in the spring, Technik the deminer said. A cursory look reveals the tops of anti-tank mines poking up in the fields.

Even so, after a night of shelling from Friday evening into Saturday, Kherson resident Oleksandr Chebotariov said life had been even worse under the enemies for himself, his wife and three-year-old daughter.

“It’s easier to breathe now,” the 35-year-old radiologist said – only to add: “If the banging doesn’t stop before the New Year, I’m going on vacation.”