DAMASCUS (AFP) – Family members from three generations were huddled on the back of a pickup truck for what started as a joyful ride through the Syrian countryside for Abdulaziz al-Oqab and his relatives.

They were planning to sample the long-forgotten peacetime pleasure of a simple family picnic when a landmine brought a bloody end to their outing, and to the lives of 21 family members.

Oqab walked away with relatively light wounds that day in February 2019, but the blast killed his wife, two of his sons, four of his siblings, an uncle and other family members, and left others maimed.

“It was a day of joy that turned into tragedy,” Oqab, 41, told AFP. “I’ve come to hate going out since then. People live in fear of this faceless killer that could be anywhere.”

The airstrikes and shelling responsible for many of the Syrian war’s half million deaths have decreased in recent years.

But remnants of explosives laid by all sides in the 11-year-old conflict are now claiming more lives in Syria than anywhere else in the world, says the United Nations (UN).

Since 2015, landmines and other explosive remnants have on average killed or injured five people every day, according to UN data. 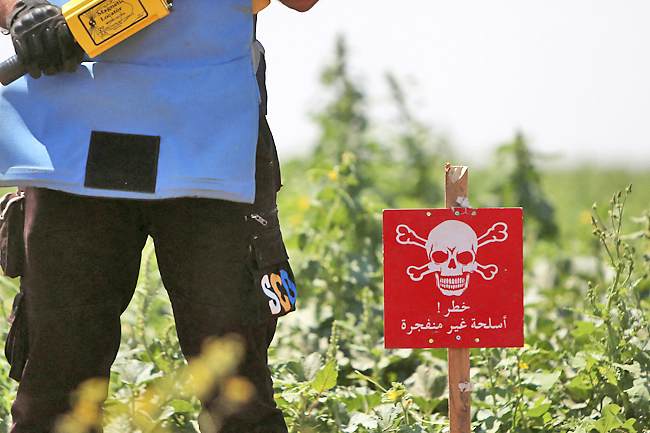 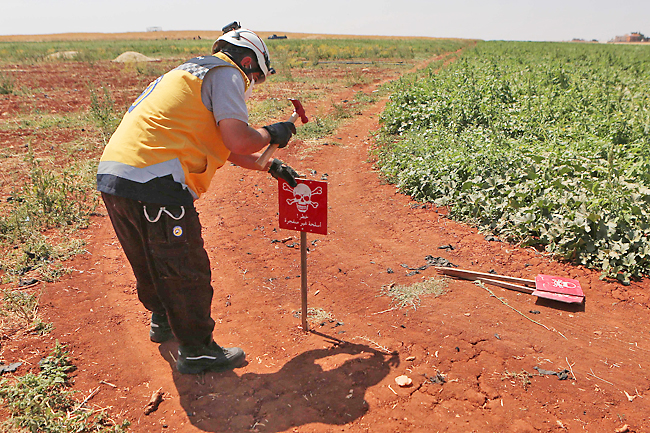 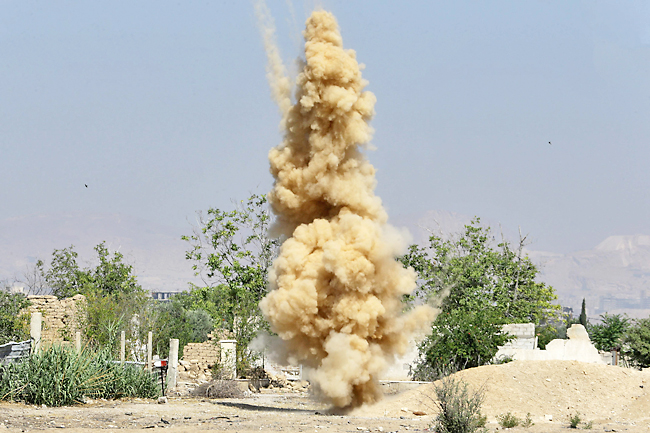 “An entire family was destroyed,” Oqab said about the fateful day more than three years ago, sitting outside his traditional beehive-style mud hut in his village in Hama province. “Death awaited us from inside the earth,” he said, surrounded by his orphaned nephews.

The UN Mine Action Service said 15,000 people have been killed or injured by explosive devices in Syria since 2015.

This is a “huge number”, said Habibulhaq Javed, who heads Syria’s UNMAS team.

Syria’s war is estimated to have killed almost 500,000 people and displaced millions since it began in 2011. About 10.2 million people, or roughly half of all Syrians, live in areas contaminated with explosive devices, the UN says.

“Mines have a long lifespan,” said a Syrian army officer, who asked not to be named over security concerns.

They stay lethal even longer if they are kept inside casings, he told AFP during a de-mining training exercise organised by the military near Damascus.

Syrian authorities detonate ammunition and explosive remnants of war on a near-daily basis, especially in areas formerly held by rebel forces near the capital.

In Syria’s rebel-held north, it is rescue workers who take on the daunting task of sweeping for landmines and detonating them, in the absence of state support.

The White Helmets rescue group has even set up training and workshops to raise awareness on the dangers landmines pose.

Raed Hassoun of the White Helmets heads a de-mining centre in Syria’s northwest that has neutralised about 24,000 explosive devices since 2016. “We deal with unexploded ordnance according to one principle,” he told AFP. “Your first mistake is your last.”

A lack of resources is depriving most of Syria’s towns and villages of vital mine clearance work.

Last year, UNMAS carried out its first mine-clearing operation in government-held parts of Daraya, an area on the outskirts of Damascus that was once a rebel bastion and saw fierce fighting.

UNMAS also carried out sweeps in the Yarmuk Palestinian refugee camp outside Damascus, which was held by rebels and then extremists before its recapture by government forces in 2018.

Explosive remnants were found in about 200 out of 6,000 surveyed buildings, the UN said.

The world body is struggling with limited funding for its de-mining programmes, Javed said. As a result, civilians have paid the price.

They include the family of Zakia al-Boushi who, on a fateful day in 2017, went out with eight relatives in Aleppo province searching for the precious white truffles that grow in the desert sands in winter. Only three of them returned alive.