Pengiran Muhammad Amirun Haziq bin Pengiran Hasroul, 19, remembered the day he failed an audition to join the tahktim group in his religious school.

“I didn’t get accepted. I saw that as a challenge. I had the urge to keep trying and thats how it evolved into making music,” he said, adding that he wanted to exceed expectations.

Along the way, he met 20-year-old Mohammad Khairul Haziq bin Azmi. At the time, the two were enrolled at Politeknik Brunei on the same course.

Khairul had grown up close to music. “My brother is in a band, my father was in a band, and my mom sings. When I was a kid, I started playing the piano. After a year, I picked up my brother’s guitar and my brother and father taught me a bit, and after that, I started learning on my own,” he said.

Amirun found out that Khairul was also making music, and the two began a slow, budding friendship, composing and releasing songs that express the challenges they face as well as whatever whimsy that strikes at the heat of the moment.

Such as a song about ducks, titled, Song About Ducks. 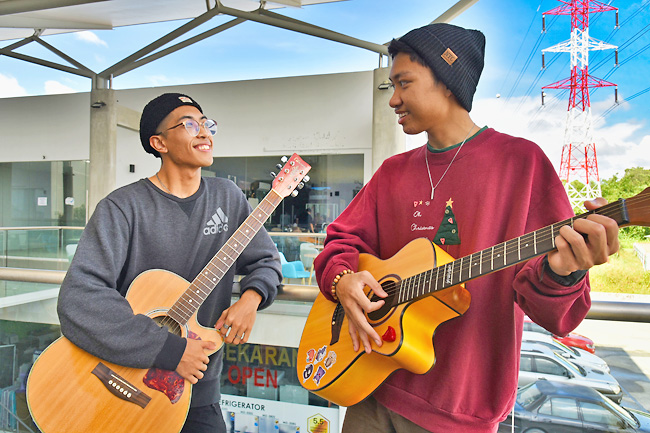 “What happened was that at the time we bought a duck. It was cute, so we brought it home and after a while he (Khairul) sent me this song, and I was like, okay, I’ll just hop into it,” said Amirun.

Earlier in the year, the two fledgling artistes begin posting their joint-compositions to online audio-distribution platform SoundCloud, under the name Project MARS.

It wasn’t easy for the pair of students to make music together.

Khairul lives in the Belait District while Amirun stays in the Brunei-Muara District, and both are attending different schools.

“One of the main challenges that we both face is that we live far away from each other, its not easy to meet and get our ideas aligned.

“Sometimes I just have to send a beat online to him and it is not what I expect, so I have to explain it through text, which doesn’t always go through. That’s why it’s easier if we talk face-to-face,” he said.

Having a place to record and the right audio equipment is also a challenge. “For me, it’s background noise. I don’t have a good microphone so the background noise is always present,” said Haziq.

To alleviate the noise, he resorts to turning off appliances and finding a quiet spot to record the vocals for their compositions.

The pair have also been using digital music makers such as GarageBand. While it wasn’t their ideal platform, it was something to get them started.

“It’s not that we like doing it digitally. It is just we don’t have the right sound equipment to record the guitar and piano live, so we just have to do it with what we have,” said Khairul, adding that GarageBand is freely available to those wanting to make music.

With the digital app, the two have released a handful of songs on the SoundCloud platform (including the one about ducks).

For the two young artiste, music is their choice of expression.

“Our music is based on our moods or what’s happening around us,” said Amirun. “We want our listeners to connect with us and understand our personalities through our songs if they don’t know us, and hope we can also understand our audience,”

“It’s just the style of songs resonated with the two of us. However, we have been trying other styles,” added Khairul.

As newcomers making their mark on the music scene, both express high hopes.

“I know this is going to sound unrealistic, but we hope to perform in other countries and get our songs exposed all around the world,” said Amirun. “We hope one day it will happen.”