NAIROBI (AFP) – Allegations that Ethiopian forces captured and killed Sudanese troops in a contested area along their border – charges denied by Addis Ababa – have revived a decades-old dispute over the fertile land.

The brinkmanship over Al-Fashaqa has alarmed regional leaders and fed into wider tensions between the rival powers of Sudan and Ethiopia over land and water in the Horn of Africa.

Khartoum announced on Monday it would recall its ambassador to Addis Ababa after accusing Ethiopia’s army of executing seven Sudanese soldiers and a civilian during a clash in Al-Fashaqa last week.

Sudan said the soldiers were “kidnapped from Sudanese territories” on June 22, taken into Ethiopia, and later “killed and their bodies publicly maimed”.

During a visit to the contested zone claimed by both countries, Sudan’s military leader Abdel Fattah al-Burhan instructed soldiers “to not allow any new movements or encroachments” on their soil.

The army, which has been in power since a coup in October 2021, vowed that the “perfidious act will not pass”.

Ethiopia’s army hit back, denying any role whatsoever in the killings, and vowing to drive Sudanese forces off any seized land if ordered. 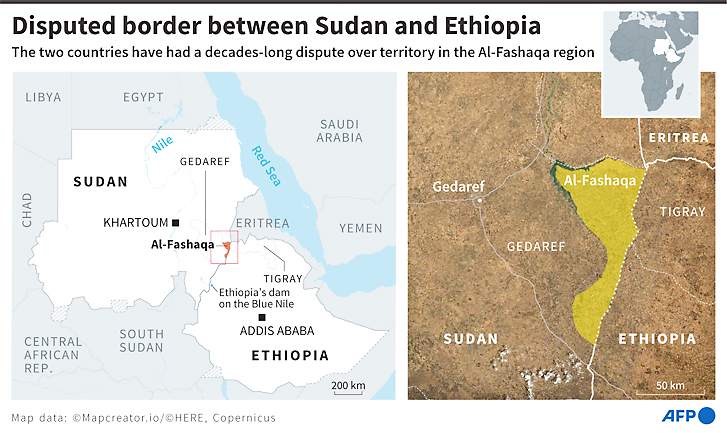