AUCKLAND (AFP) – England turned on the power to rout South Africa 75-0 in Auckland on Sunday and set up a quarter-final against Australia as the last eight line-up was decided at the women’s Rugby World Cup.

A rampant England showed why they are tournament favourites in muscular display where forwards scored 12 of their 13 tries.

While they scored more tries and points than any other team, England will take a third seeding into the quarter-finals behind hosts New Zealand and Canada as they failed to earn a bonus point in last week’s 13-7 defeat of France.

It means they will face the sixth-seeded Wallaroos next week, while the other quarter-finals will be between teams who have already met each other in pool play. 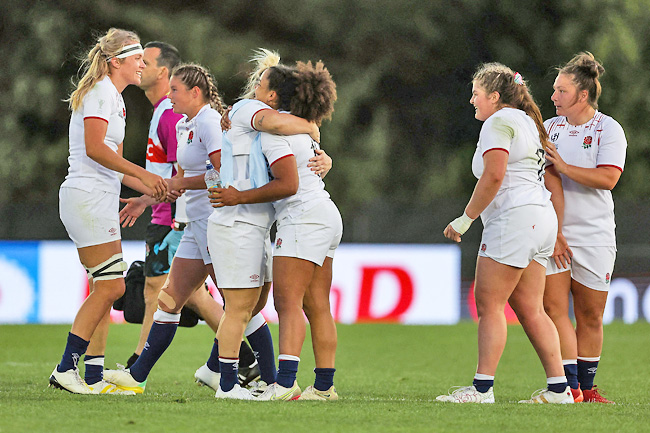 The top-seeded Black Ferns will face Wales, second seeds Canada will repeat Sunday’s match against the US and France will play Italy.

Wales and the US advanced as the two best third-placed finishers while Fiji, Japan, Scotland and South Africa were eliminated from the 12-team tournament.

England’s formidable run of 28 straight wins continued despite several of their senior stars being rested on Sunday.

One of the players making a tournament debut was lock Rosie Galligan, who scored a hat-trick of tries, while there were doubles for hooker Connie Powell and replacement flanker Sadia Kabeya.

Captain Marlie Packer was unapologetic about relying on power to quell the winless South Africans, saying it was the sort of rugby needed to win knockout matches.

“We’ve worked on stuff in training from the France game. There were a lot of changes, a lot of first starts in a World Cup for some of these players,” she said.

“We can take a lot from this and build into the quarter-finals now. I’m super happy.”

Canada also employed forward power to see off the US 29-14 and captain Sophie de Goede hoped it will work again next week against the same opposition.