AMSTELVEEN, NETHERLANDS (AFP) – England beat off a plucky attack by the Netherlands on Sunday to defeat the hosts by six wickets in a shortened second one-day international at VRA cricket ground outside Amsterdam.

The win by the world champions give them an unassailable 2-0 lead in the series, with the final match to be played tomorrow.

The Netherlands won the toss and opted to bat, setting Eoin Morgan’s men a target of 236-7 in 41 overs.

Heavy rain overnight delayed the start of the match with officials waiting for wet patches to dry next to the batting-friendly pitch and on the outfield.

Roy, who scored a single run in England’s record total of 498 on Friday, redeemed himself by hitting 73 off 60 balls. 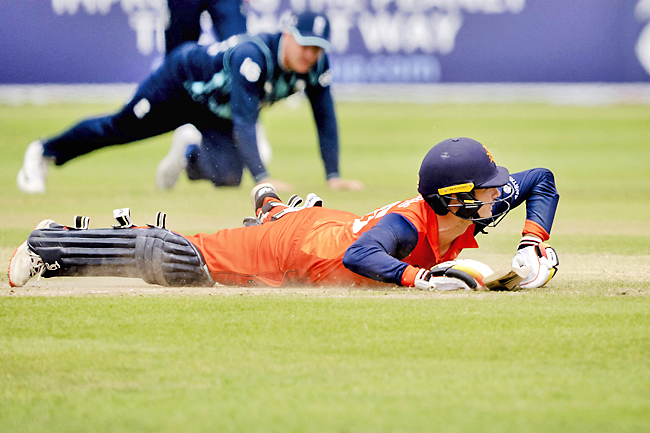 Unlike Friday’s run-fest which was peppered with sixes, Sunday’s match was a more demure affair, with England’s first six only coming in the 15th over when Roy hit Dutt over midwicket to clear the boundary.

Salt survived an early scare when an attempted off-side cut sent the ball into the air, only to fall between two Dutch fielders — none of whom decisively nominated for the catch.

The Welsh-born Salt never really seemed troubled after that, celebrating his half-century with a stylish four off the bowling of Bas de Leede.

Dutt however had the last laugh when Salt attempted to play around the ball and was beaten, seeing the bails flying off the stumps behind him. The Netherlands earlier posted a solid 235-7 against a blistering England attack led by David Willey and Brydon Carse on a pitch that stayed low.

Newly-minted captain Scott Edwards’ move paid far better dividends than Friday’s first ODI, when England were sent in to bat and proceeded to set a new one-day world record of 498.

Former captain Pieter Seelaar, who has been plagued by a recurring back injury and did not play, announced his retirement from international cricket after the match.

Together with exciting rookie Teja Nidamanuru, who slugged 28 off 30 balls, Edwards put on the best partnership for the Dutch of 73 runs.

Edwards was eventually run out after Willey removed the bails at the bowlers’ end with a bull’s-eye throw.

Bas de Leede carved out a patient 34 including slogging a big six off the bowling of Adil Rashid in the 15th over, the ball flying over cow corner to break a window pane in the press box.

A promising spell however came to an end when De Leede mistimed another attempt at a slog off the bowling of Liam Livingstone, popping the ball up into the air for an easy catch by Willey. A late flurry by Logan van Beek with 30 not out saw the hosts post a defendable total.

Morgan’s men however drew first blood early in the Dutch innings, when opener Vikram Singh was dismissed for 10 in a soft catch off Willey’s bowling.