KARACHI, PAKISTAN (AP) – Ben Stokes (AP, pic below) finished unbeaten as his relentless England lineup powered to an eight-wicket win in the third and final cricket test yesterday to complete an historic series sweep in Pakistan.

England started the day needing a further 55 runs for victory and reached 170-2 within 38 minutes to secure its second successive win with more than a day to spare in its first test tour to Pakistan in 17 years.

It was Pakistan’s first ever 3-0 loss in a three-test series on home soil.

Pakistan fell for 216 against 18-year-old legspinner Rehan Ahmed (5-48) in the second innings, setting England a modest target of 167 for victory. Ben Duckett resumed Day 4 on 50 and remained unbeaten on 82 off 78 balls and skipper Stokes signed off his team’s dominant ‘Bazball’ brand of aggressive cricket by finishing 35 not out.

Pakistan spinner Abrar Ahmed could have finished the series with 18 wickets in two test matches, but Agha Salman couldn’t hold onto a difficult chance from Stoke at long-on with England just 19 runs away from a memorable win. England won the first test on a flat wicket in Rawalpindi by 74 runs in dimming light on the last day before recording a thrilling 26-run win at Multan on a slow turning track inside four days.

Rehan Ahmed, on debut, conquered Pakistan’s batters in the team’s fortress – National Stadium – on Day Three and England had motored to 112-2 in the final session.

It was a just a third loss for Pakistan at the National Stadium in 45 test matches and first in 15 years. 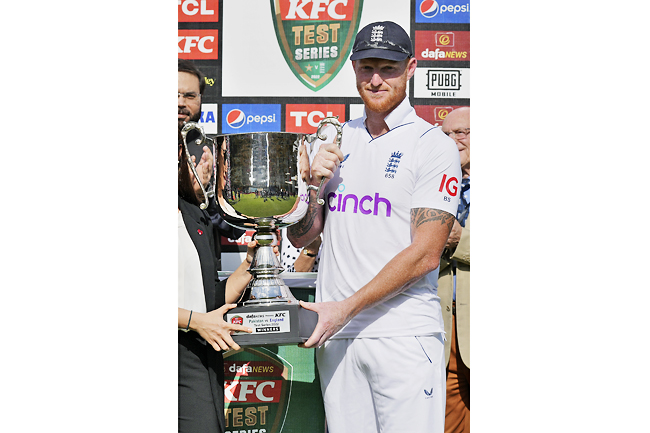