THE WASHINGTON POST – Yvonne Faulkner-Grant and her husband, David Grant, noticed something unusual about their dog Scruff last year while they were out walking in their town of Nuneaton in central England.

The 13-year-old border collie had always enjoyed fetching sticks, but the Grants stopped throwing them after a veterinarian said they might leave cuts inside Scruff’s mouth, Yvonne said.

Border collies are natural working dogs and love to play fetch, she said, so she and David were happy when Scruff started picking up discarded plastic bottles in fields, parks and streets around town.

“He would see a bottle that somebody had tossed out, and he’d go pick it up, play with it, then drop it and leave it,” Yvonne said.

“We’d praise him and he’d go look for another one, but we started to feel bad about leaving the bottles,” David added. “Even though they weren’t ours to begin with, we thought of it as littering.”

He and Yvonne developed a plan: They would bring a cloth sack along on their twice-daily walks so they could collect and recycle all of the bottles Scruff picked up.

It was close to the new year, so the Grants also thought it would be fun to document all of the littered plastic water, soda and juice bottles that Scruff found in 2022.

They now post about his cleanup adventures once a month on David’s Facebook page under the hashtag #scruffsbottlepatrol. 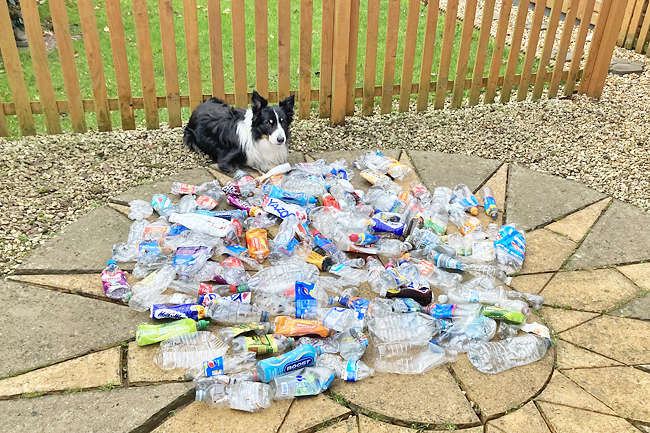 In January, the first month when they kept track, Scruff found 41 bottles, they said. When David snapped a photo and shared it on Facebook, friends and neighbours chimed in with praises of “Good boy!” and “Well done, Scruff!”

“Good work, Scruff … you deserve a treat,” one follower commented.

“I just think this is absolutely brilliant. Good lad, Scruff,” wrote another.

One man nicknamed the pooch “Scruffy the Eco Warrior”, and that was soon shortened to “Eco Dog,” Yvonne said.

“We were all amazed at how many bottles he would find – and we were also shocked at how many people were tossing them on the ground,” she said.

“Everyone loved that Scruff was helping to clean up our town.”

In February, Scruff upped his game and found 61 plastic bottles, followed in March by 110 bottles and one plastic cup. In August, he found a whopping 143 bottles, David said.

“We think it was related to kids being out of school, but that’s no excuse for littering,” he said.

“We’re glad that Scruff enjoys picking them up and can help set an example of how to care for the planet.”

He and Yvonne store the bottles in their backyard and will add them up to get a grand tally in early January before recycling them, he said.

“There are definitely more than 1,000 right now,” David said. “There are very few days when Scruff doesn’t find one.”

“Finding plastic bottles is his focus and passion,” added Yvonne.

“He’s the kind of dog that needs command, and he feels like he’s pleasing us when he drops another plastic bottle at our feet.”

Scruff has been part of their family since 2009 when she brought him home as a puppy after picking him up at a farm in Wales, she said.

“He’s always been a really smart and playful dog who loves long walks and games of fetch,” Yvonne noted. “It could be pelting rain and he doesn’t bat an eyelid. He loves to be outdoors.”

When she and David met about three years ago at a running club (they recently married in September), he also fell in love with Scruff, she said.

“Scruff is an older dog, but he has a lot of energy and is always ready to play,” she said.

“Both of us have always enjoyed two long walks with him, morning and night.”

Yvonne works as a supervisor for a food distribution company while David works in a factory that manufactures aerospace products, he said.

“You get home and you’re tired and Scruff will come up and put a ball in your lap,” David said.

“We probably walk five miles a day with him, through the woods and fields near where we live. It’s always a fun adventure to go out with him.”

When Scruff finds a bottle, he will race over and sit by it until he is given permission to pick it up, he said.

“And if it’s across the road, he won’t cross unless we tell him to,” David said. “He’s a brilliant dog.”

Another dog in London made headlines in October for collecting 6,000 stray golf balls, but the Grants said Scruff isn’t worried that other canines are out to steal his limelight in the United Kingdom now that he’s been featured by the BBC.

“He hasn’t let the attention go to his head,” Yvonne said. “Lots of people tell us he doesn’t look his age.”

“He really is a hero dog,” David added, noting that it will be a fun surprise to add up all of Scruff’s plastic bottles for the year.

He and Yvonne plan to continue storing bottles for Scruff in the yard throughout 2023, but this time they’ll recycle them at the end of each month, he said.

“Let’s just say he collected far more bottles this year than we ever imagined he would,” David said.