Does your child snore?

CNA – When you check in on your sleeping child, you’d probably chuckle at the heartwarming sight of your little one snoring softly – relieved that he is finally getting the quintessential sleep he needs for his brain development. But is he really?

In children with OSA, the poor amount of oxygen they receive during sleep has been linked to impaired brain development, poor academic performance, altered metabolism and behavioural problems.

“While adults usually suffer from daytime sleepiness, children are more likely to have behavioural problems,” according to Healthline.

That’s not all. “The consequences depend on the severity of the OSA,” said Associate Professor Goh. If left undiagnosed and untreated, the long-term complications may include “cardiovascular and neurocognitive complications. Poor sleep can also impair glucose metabolism and increase the risk of diabetes”. 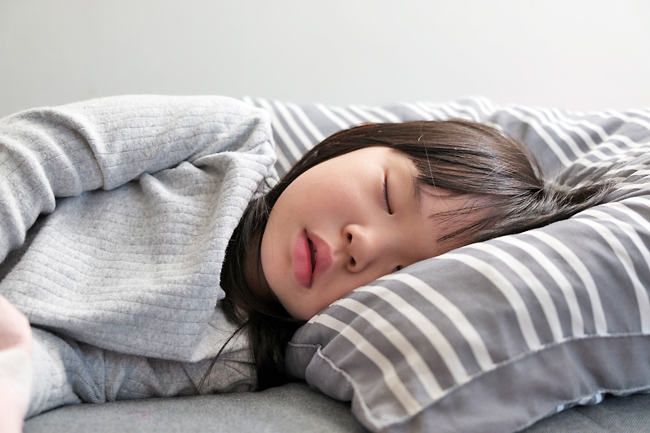 The cause of OSA is also different in both adults and children; in grown-ups, it is often obesity, while in children, the most common underlying reason is the enlargement of the adenoids and tonsils.

HOW DO YOU TELL IF YOUR CHILD HAS OBSTRUCTIVE SLEEP APNOEA?

So yes, your kid’s snoring isn’t as cute as it seems. In fact, snoring that has become a habit may be a cause for concern.

According to Associate Professor Goh, habitual snoring refers to snoring that occurs three or more nights a week on a consistent basis – and excludes those who snore occasionally when tired or having an upper respiratory infection.

“Habitual snoring is related to an increased likelihood of OSA,” he said.

“Previous studies done by my group at National University Hospital’s Paediatrics have found that habitual snoring occurs in approximately six per cent of children in Singapore in the pre-school to primary school age group.”

Usually, the snoring correlates with the three- to eight-year-old age group when the child’s “tonsils and adenoids typically peak in their size and regress after that”, said Associate Professor Goh. The snoring could “gradually get less prominent after nine or 10 years old”.

This is different from noisy breathing, especially in newborns, said Associate Professor Goh.

“In young children, the upper airways – including the nasal passages – are relatively small and may be easily obstructed. Any inflammation from infection or structural abnormality may cause partial obstruction and noises which may be perceived as snoring.”

According to the Sleep Foundation website, the following could be signs that your child’s snoring needs looking into:

As it turns out, there are also other factors that could predispose your child to snoring, according to a 2013 study on over 23,000 children from 14 countries in Asia Pacific, aged from birth to 36 months.

Yet, rather ironically, Asian parents reported to have greater bedtime difficulties, which could be the result of a lack of a bedtime routine or one that isn’t consistently enforced.

This is seen in the larger proportion of children in Asian countries who take more than 30 minutes to fall asleep compared to those in Caucasian countries, said Associate Professor Goh, who co-authored the paper published in Journal of Paediatrics and Child Health.

“The overall parental perception of their children having a sleep problem is higher in Asian countries compared to Caucasian countries.”

He added that “the findings are observational and do not reveal the reasons or explanations (behind the snoring)”.

“Nonetheless, it is interesting that the whole study does unveil significant racial/cultural differences in many aspects of sleep in young children,” he said.

For instance, the study found that Asian children go to sleep later and sleep less than their Caucasian counterparts. Naps were found to be consistent with both groups of children but nighttime sleep was more varied across the region.

“This may suggest that daytime sleep is more biologically based compared with nighttime sleep, which may be more culturally based,” said Associate Professor Goh.

As for the gender factor, “generally, it has been observed that prepubertal boys have smaller calibre airways than girls do”, he said. “Perhaps this could be a contributory factor for boys to have more habitual snoring than girls.”