AP – Okay, so we knew there was going to be an ending. We just didn’t know there’d be, like, six endings.

Honestly, after a while I stopped keeping count of each time I thought Halloween Ends, ballyhooed as the final, no-really-we-mean-it-final installment of the Halloween saga that began with John Carpenter’s 1978 classic – or at least for star and producer Jamie Lee Curtis – was finished. Was it when she does this? When he does that? When that other person comes in? In my notebook I kept writing, “It ends with…” But then some other crazy thing happened.

As for whether this kitchen-sink approach to narrative resolution will bother you, well, that depends on what you came for.

Actually, the turntable – can we repeat that this scene is disturbing? – is rather a concerning metaphor here, because it implies something that may slow down but never fully stop. And that’s the uneasy feeling we get at the end as we leave Strode, her masked nemesis Michael Myers and the other residents of Haddonfield, Illinois, (a town in which, if we can digress for a second, the real estate values must be in the tank by now given the body count, but somehow people stay?) Can we really trust this will finally be it? 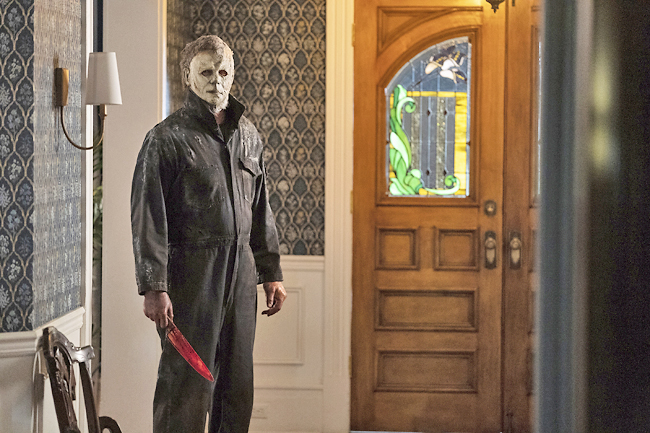 In any case, nobody can seem to quit Haddonfield, least of all Strode, so it is there, once more, that we begin this third installment of the trilogy by David Gordon Green, which was meant to follow directly from the original, ignoring all the intervening sequels and reboots.

In case you missed any, there’s a handy recap from Strode herself, as narrator. But first, we witness a harrowing prelude in which another babysitter gets into trouble on Halloween night, this time in 2019 – not a girl but a boy, Corey (Rohan Campbell). A few hours after his cheerful arrival, the young boy he’s minding is dead and Corey’s being taken away by the authorities.

Was the horrible event an accident or intentional? When we meet Corey again, he is out free but a shadow of his former self. Strode, meanwhile, has bought a new home, is writing a memoir, and is aiming to move on (but not out, at least not out of Haddonfield).

“It’s been four years since I last saw my monster,” she told us. “So here I am, a survivor attempting to share my story and find healing.”

Strode, whom we see typing out her thoughts a la Carrie Bradshaw, spouts a bunch of psycho-babble about individual responsibility to resist evil, which coming from anyone but Curtis would sound utterly absurd – but her resourceful presence has been the main reason to watch this franchise since her first babysitting gigs in 1978. In any case, theories about finding strength in making peace with one’s fears sound fine, until one is facing a huge masked guy with a bloody carving knife in the kitchen – or so it would seem.

Strode is now living with her granddaughter, Allyson (a lovely Andi Matichak), now a nurse, who tragically lost her parents to the Boogeyman, aka Myers. Allyson also yearns to move on from tragedy (but not from Haddonfield!) and when she meets Corey, something in the troubled young man strikes a chord. As the pair grows closer, though, Strode is becoming increasingly concerned by a dark side of Corey that reminds her of … hmm, who could it be? … it’ll come to us.

Speaking of Myers, of course he’s back. We won’t tell you where and how, but no one will be shocked, because it always comes down to the last 20 minutes or so of epic, biblical confrontation between him and Strode. On Halloween. Obviously.

The only difference this time is whether we can believe that this ending – well, these six endings – are really it. (Wait, is that the reason the film is called Halloween Ends – as in ends, plural?) There does seem to be some pretty incontrovertible evidence here that someone, and we won’t tell who, would have a hard time returning.

But that turntable is still spinning. We may be seeing all these people again.

Halloween Ends, a Universal Pictures release, has been rated R by the Motion Picture Association of America “for bloody horror violence and gore, language throughout and some sexual references”.