THE WASHINGTON POST – Hurricane season is coming to an end, which means a vacation to Central America is less likely to be squashed by tempestuous conditions.

That’s why right about now many snorkelers and scuba divers are planning their underwater getaways to some of the best marine spots in the region.

With easy direct flights from the United States (US) and Canada, and cheap excursions from the shore once you land, this stretch of the Americas is ideal for inflation-pinched vacationers still looking for fun. We’ve rounded up some of the best water destinations from Belize to Panama that beckon with their schools of fish and laid-back vibes.

But it’s an expensive, long day trip, with just a small amount of time spent under the water exploring due to its depth. As an alternative or an addition to the Blue Hole, consider Turneffe Atoll.

Located about a 45-minute ferry ride from Belize City or an hour and a half from San Pedro Town, Turneffe is a lightly populated, 30-mile long coral reef surrounding a lagoon, which features the largest marine reserve in the country.

Because it is closer to the mainland than the Blue Hole, a day trip is cheaper, and you’re able to spend more time at the bottom checking out the local sea life, including barracuda, sea turtles and eagle rays.

Turneffe is also great for groups that include both snorkelers and more experienced divers, thanks to a mix of shallow areas and deep sea walls. As an added bonus, the area is home to one of the newest wreck dives on the planet. 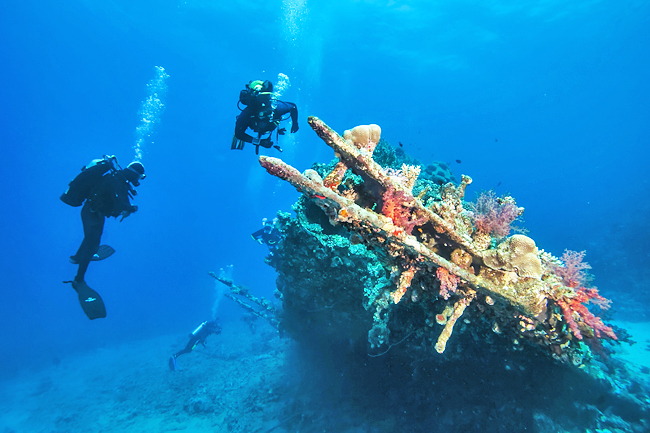 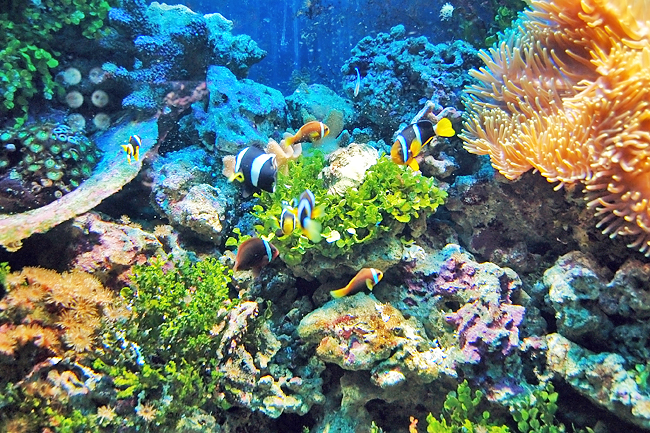 Last year, a ship once used for sugar transportation and molasses storage called the Witconcrete Wreck was intentionally sunk as a new hub of marine activity.

“Mid-November we’ll have wall dives with pristine waters at Turneffe,” she said, adding that November dives dodge the hurricane season, the high season and the windy season.

Because the Blue Hole is so much more popular than Turneffe, be sure to contact dive shops ahead of time, as they might not regularly make the trip or may require a minimum number of participants.

Or, you can go all-in and stay on the atoll itself at one of a handful of upscale resorts like the Belize Dive Haven.

About 40 miles from the mainland, Roatan is world-renowned for its diving options – and perhaps the best stop for someone looking to see what Central America has to offer beneath the surface. The island is one of Honduras’s three main Bay Islands, along with Utila and Guanaja.

Divers to the area, which is the second-largest reef in the world, are spoiled by a wide variety of scuba experiences, from coral gardens and caverns to walls and wrecks like the El Aguila and Odyssey. And it’s all super accessible, located just a few minutes from the shore.

“Here on Roatan it’s pretty much like honeymoon diving, really simple and really easy,” said Roatan Marine Park Patrols and Infrastructure Coordinator Nicholas Bach. “Usually the visibility is remarkably good, there aren’t really any strong currents to name of, and the dive sites are all really close by.”

For those travellers that prefer not to dive, hotel-lined West Bay Beach is often ranked among the finest beaches in the world and also offers snorkeling.

Meanwhile, other parts of the island offer a quiet refuge from the crowds: “The nice thing about Roatan is you’ve got beaches on a portion of the island and hotels and bars, and other places that are more secluded. So the benefit of being here is you can really choose how isolated you want to be,” added Bach.

The Corn Islands – Big Corn and Little Corn – are sister islands about 40 miles off the Caribbean coast of Nicaragua and a great option for ocean-lovers looking for something off the beaten path.

Big Corn Island is lined in several places by mangrove swamps, and some of the reefs closest to the shore have suffered from degradation. But the great draw underwater is Blowing Rock, a rock formation that rises up to the surface of the water and houses lots of marine life; it’s the hallmark dive of the Dos Tiburones Dive Shop on the north shore of the island.

There are no roads or cars on Little Corn Island, and it’s just one square mile, but it boasts 20 different dive spots teeming with lobster, nurse sharks and vibrant coral. For the adrenaline seekers, there’s the Tunnels, which are a series of underwater swim-throughs beneath the reef where sharks like to hang out. Historically, the island was a hub for lobster fishermen, but in recent years the shallow reefs have become an increasingly popular choice for snorkelers and dive beginners. Plus, it’s one of the cheapest scuba spots in Central America: at Dolphin Dive Little Corn.

Visiting Cocos Island, an uninhabited, nine-mile square located 340 miles off Costa Rica in the Pacific, is a major undertaking.

You’ll have to sign up with a liveaboard vessel, which is basically a cruise for diving fanatics.

Eat, sleep, dive and repeat with a small group of fellow marine lovers. Liveaboards can be exhilarating bonding experiences, but because of their commitment and cost they often draw only the most dedicated divers.

It will take about 36 hours of cruising to make it to the island, which is also a national park and UNESCO site.

But once there, visitors get to enjoy an untouched oceanic playground that Jacques Cousteau once called “the most beautiful island in the world”.

Large schools of hammerhead sharks and manta rays flock to the area. Visibility is great over the December holidays, since it’s the driest season. Come January you may be lucky enough to witness the migration of pilot or humpback whales as they cross the Pacific.

Though it’s a UNESCO World Heritage site, Coiba National Marine Park is considered a hidden gem among ocean enthusiasts – a vast, little-visited reserve made up of 38 different islands.

Located on the Pacific side of the country, head first to the town of Santa Catalina, where boat tours depart to go to Coiba.

It’s about a six-hour drive from Panama City, or a quick 20-minute flight, and then the boat ride to Coiba is around two hours more, depending on conditions.

The history of the area is a testament to its remoteness: for 100 years Coiba Island, the largest island, was a penal colony with as many as 3,000 prisoners roaming the forest.

Panamanians have always considered Coiba spooky and dangerous, but there’s been an unexpected benefit to its alleged haunted past. Because access to the island was restricted for so long, the jungle managed to remain preserved, and today it is considered one of the most biodiverse places on the planet.

Tour operators often include all meals, beverages and snacks in their packages. Although there isn’t much lodging in the park, the government does have some cabins available for rent – think of it as camping with walls.

If it sounds like a lot of trouble to get there, it is. But for those adventurers willing to make the journey, white-tipped sharks and hammerheads await, and starting around December mammoth whale sharks pass through as well. Coiba is also beloved by surfers; it’s considered a top spot in Central America to catch a wave.