THE WASHINGTON POST – Recently, on the third night of solo parenting while my husband was out of town, I snapped a photo of our daughter engrossed in her iPad while our son gorged on cartoons on my laptop, then texted the picture to their dad as evidence of how dire the situation had become in his absence.

Quick quiz: which was my greater sin: allowing our nine-year-old to wade unmonitored through the wilds of YouTube, or letting our two-year-old rot his brain on Cocomelon?
Trick question. If you believe much of the hype around distracted parenting – paying more attention to your devices than your kids – the most egregious screen use was my own. But is distracted parenting really all that bad?

The answer is… sometimes. A lot depends, experts say, on how and why we’re using our screens. Just as we worry about the effect of screen time on our kids’ mental health, we should ask ourselves what our own screen time is doing to our sense of ourselves as parents.

Here’s how experts say parents can use devices to help them be better parents, instead of worse.

HOW TO DEFINE DISTRACTED PARENTING

Experts have been studying the effects of smartphones on parents for almost as long as we’ve had phones to distract us from our kids.

And the evidence, according to several studies over about a decade, certainly suggests that phones really do have the potential to make us worse parents.

Not only are we less likely to pay attention to our kids’ physical safety when we’re tapping and scrolling, we can also miss their emotional cues and the kinds of quality interactions especially important for younger kids’ development. 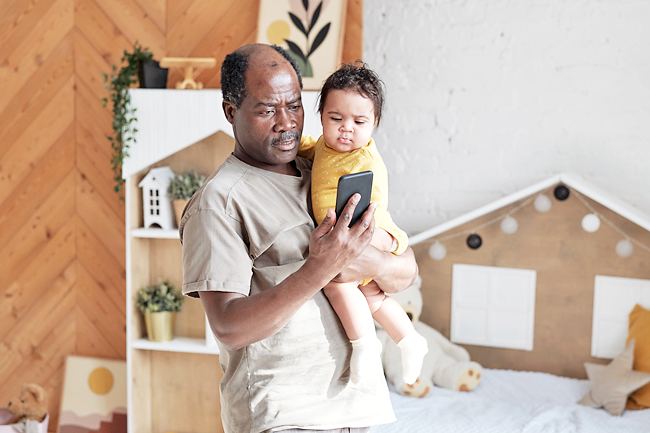 Before we all throw our smartphones out the window, it’s important to define exactly what we mean by distracted parenting.

“Phone use during parenting is very nuanced,” said a research scientist at the Parkview Mirro Center for Research and Innovation Dr Brandon McDaniel, who has extensively studied the effect of technology on parents and children.

According to McDaniel, there are positive as well as negative ways to use your phone when you’re with your kids. Positive ways might include reaching out to a friend for moral support when you’re at your frustration limit, or to get useful information (“hey, Siri, should my baby’s poop be purple?”).

There are also the simply unavoidable times when we need to answer a work call or respond to a text from a spouse or caregiver. McDaniel says this type of distracted parenting is probably benign.

“Occasional phone use will likely not cause any long-term negative effects,” he said.

A less useful, and more problematic, form of tech use during parenting is using the phone as an escape from the unpleasant feelings like stress, boredom, and loneliness that are all integral to being a parent, no matter how much you love your kids.

The real problem with this sort of voluntary distracted parenting – as opposed to accomplishing a quick and necessary task – is that it often backfires.

“Occasionally parents say playing a game or scrolling social media distracted them from how negative they were feeling and they were able to re-engage with their kids, although that’s rare,” McDaniel said. “More often, these ‘escape’ types of uses result in feelings of guilt or wasted time.”

“Research has shown a possible cycle where phone use around a child can lead to increased negative child behaviour, which leads to greater parent stress, even though they had hoped to alleviate some stress with the phone use,” McDaniel said.

Parents shouldn’t blame themselves if they have a hard time resisting just one quick refresh of Facebook, even if they know it’s not in their or their kids’ best interest. Many social media apps and platforms “encourage parents to post, react to, and consume endless amounts of content”, said an assistant professor of pediatrics at University of Michigan Medical School Jenny Radesky, who studies media and child development.

Paradoxically, much of this parental engagement with social media makes us feel worse about ourselves as parents, and not just because we’re ignoring our kids to do it. Parents can be just as vulnerable to the “compare and despair” aspects of platforms like Instagram and Facebook as anyone else.

Radesky says that parents she’s interviewed have told her that “sometimes it feels like other parents are posting self-promoting ‘ads’ about themselves”, yet they have a hard time separating the fiction of social media from the often unglamorous reality of raising children.

THINK BEFORE YOU SCROLL

To cut back on unproductive screen time when you’re with your kids – the kind that makes you feel worse about yourself as a parent – Radesky suggests creating some road blocks to make you pause before you tap that app. For example if removing apps altogether feels too extreme, you can hide them within folders so they aren’t immediately visible when you pick up your phone.

You can change your lock screen to an image that reminds you of limits you’ve set for yourself around tech use.

Radesky also recommended narrating what you’re doing when you’re using your phone, both to involve your children (“let’s text your babysitter and tell her to meet us at the playground”) and to hold yourself accountable for your choices.

Do you really want to have to tell your kids, “Mommy needs a second to check the momfluencer she hate-follows for a tenth time this hour”?

“My recommendation to parents is to be mindful of your tech use and consider carefully when and why you are reaching for your phone,” said McDaniel.

Are you bored? Frustrated? Having a hard time connecting? “If you’re bored when you’re with your kid, ask yourself what activities you can do that you both actually like,” said paediatric and children’s mental health expert Roseann

Capanna-Hodge. “I love baking, so my boys started cooking before they could walk.”

Capanna-Hodge suggested approaching time with your child with the mind-set that it’s going to be fun for both of you. If it’s not, switch things up. “Find a structure that works for you,” she says. “If you know certain times of day make you feel frustrated and impatient and likely to reach for your phone, change your routines.”

For me, that’s dinner time, whether my husband is home or not. I can’t say we’ve accomplished the goal of a consistently tech-free dinner hour, but I am trying to embrace the chaos, mess, and insanity of meals rather than plugging my kids into screens so I can write a snarky text about how hard it is being a parent.

I can’t say for sure, but I suspect engaging with my kids over the dinner table is helping smooth the transition to bedtime.