THE WASHINGTON POST – What do you do when your children throw blocks, scream in the grocery store or hit their little siblings? Is this the moment for a timeout? A time-in? Some calm breaths on your part – or theirs? Time to run away to a deserted island?

“There’s so much conflicting information out there,” said author Melinda Wenner Moyer.

“Some experts say that timeouts and punishments are damaging to kids, while others say they are essential to raising good, well-rounded kids.”

Here’s one thing we do know: If we want our children to grow up to be kind, emotionally intelligent adults, our interactions in these moments matter. So how do you know what to do in the heat of a moment?

Timeouts are designed to remove children from situations or behav-iours for a short time and to give them a chance to reflect and cool down alone before reengaging. During a time-in, caregivers stay with the children to help them calm down and self-regulate.

So what should a parent do, and when? When done correctly, timeouts aren’t damaging, Moyer said, but context is key. What is the child’s emotional state? Will they be able to self-regulate? Would another simple intervention, such as a distraction, snack or reminder, or even moving their body, offer the same course correction?

There’s also the question of temperament. A social worker in Louisiana Natalie Bunner tried timeouts with her children and discovered something interesting. 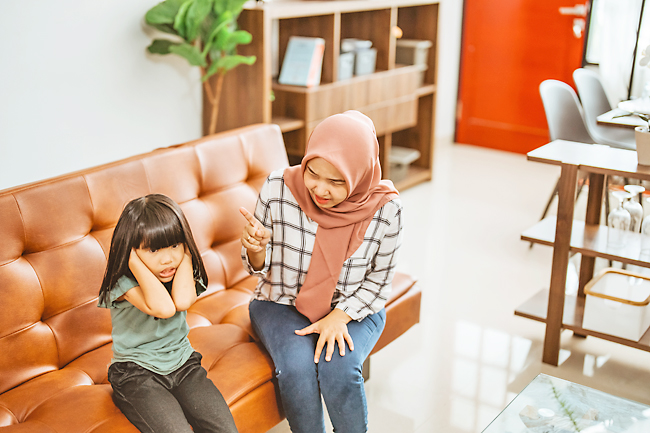 “My oldest son liked the downtime, for the most part. He seemed unbothered by the timeouts. But my younger son hated them. He was constantly trying to find a way to connect while isolated from us. Notice my language: He was trying to connect while we isolated him from us.”

Bunner found herself asking: “What exactly do we want to teach our children when we use this form of discipline? ‘You have disobeyed me, so you are banished from the kingdom?’ “

Because her goal was to increase healthy behaviours, she began shift-ing her language. “With my oldest, instead of reactively using timeouts, we proactively ask him if he would like time alone to reset. We say: ‘Hey, bud, are you feeling (insert hard feelings here)? Do you need a minute to reset?’ This gives him autonomy in his follow-up behaviours. He can choose this or say that he would prefer a hug.”

With her younger son, she discovered that giving him one-on-one time reduced his reactive behaviours.

But remember: The teaching aspect of discipline can’t happen when a child is emotionally activated. Psychologist Lisa Damour said that, when kids are upset, “the ancient regions (of the brain) can hijack the whole system and take it down.” Even the most logical children will struggle to hear thoughtful reasoning when their brains are flooded with stress hormones.

“You can’t stop a storm,” Damour said. “You have to wait it out. But these storms do pass. The brain will reset it-self.”

Director of the Yale Center for Emotional Intelligence Marc Brackett was bullied as a child.

Because of his anxiety about attending school, he would act out around his parents, yelling that he wasn’t going to go to school.

“I would yell and scream, and then they would either punish me or I would get hit,” he said.

“For so long, I was being punished for not knowing how to express or communicate what was really going on for me on the inside.”

This is why discipline strategies that focus on simply correcting children’s behaviour miss the mark, Brackett said. “When we see a kid tantruming, we automatically think, ‘My kid is being defiant.’ The truth is, you have no idea, based on their behaviour, what’s happening to them psychologically.” What looks like anger to a parent may be fear or sadness.

Parents should become “compassionate emotion scientists and curious explorers of their kids’ experiences,” he said.

When triggered by children’s behaviour, parents often react instinctively by punishing or pushing away. In those moments, Brackett said, first notice that you are being activated by your child’s behaviour.

The next step is to find a way to deactivate – to move your brain from fight-or-flight mode to “problem-solving mode and empathy mode.” Brackett said he takes a couple of deep breaths and reminds himself to take the high road.

Children sometimes “misbehave” because they don’t realise their actions are harmful or inappropriate, Moyer says. “Lots of times, we… assume that our kids ‘should know better’ or that they have more social skills than they actually do.”

That’s where using concrete language helps children see the connection between what they do and what others feel.

“When my daughter is too loud, I won’t just ask her to quiet down,” Moyer said. “I’ll ask her to please be quiet, because her brother is trying to do his homework, and loud noises make it hard for him to focus.

“When my son leaves his candy wrappers on the floor, I’ll ask him to please pick them up, because otherwise the dogs might eat them and get sick. The more we connect our kids’ choices with their broader impacts on others, the more they will consider themselves as part of a larger whole, and the kinder and more compassionate they will be.”

Children learn self-regulation when their parents are self-regulated. If a situation has pushed parents past their breaking points, “time-ins” and “timeouts” are not going to be effective.

Psychotherapist and author of Why Is My Child in Charge? Claire Lerner spends her days working with parents who are barely hanging on. The families who seek her out “tend to have kids who are just wired to be really big reactors”.

“These are amazing children. They’re sensitive, passionate and incredibly empathetic. But they also get triggered into meltdowns more easily when things don’t go their way,” she said.

Such as when the sandwich is cut the wrong way. Or when you tell them there’s no more Paw Patrol.

In short, they aren’t responding to the gentle scripts that parents see on Instagram.

Lerner’s first goal is to help parents understand that their children are not melting down on purpose. “There is a (gap) between your expectation and their ability to meet that expectation. When these kids are triggered into distress, it’s simply a physiological response.”

They may then say or do destructive things that they don’t mean and that they feel badly about once their nervous system calms down.

‘I AM NOT A BOTTOMLESS PIT OF EMPATHY’

Lerner reminds parents that they cannot control their children. “You cannot make them not have a tantrum, just like you can’t make them pee or poop or fall asleep at night.” But parents can use tools to gain more control of the situation.

Lerner suggested using a new script, one that says: “I love you and I know you don’t mean this. I’m your helper. We are going to come up with a plan to keep you safe.”

When all is calm, work with children to brainstorm calming strategies, such as belly breathing, using bear hugs or stomping their feet 20 times. Take pictures of them practicing each strategy and make a “calming poster.”

The next step is creating a space stocked with fidget toys, Nerf balls, a weighted blanket or a rocking chair. It should be a place they can go to when other strategies aren’t working.

When children start to become dysregulated, go to the poster to see whether they can use a strategy. If that doesn’t work, try a time-in. Step Three is going to the “safe space” to give them time for their stress to settle.

“This is not a time to say: ‘What’s wrong with you? Go to your room!'” Lerner said. Instead, try saying: “‘I’m going to help keep you safe, be-cause it’s not good for you to use your body in those ways.'”

Whether a parent also stays in that space depends on whether that parent can remain calm.

If you need to sit on the other side of the door, reminding them of your presence but removing yourself, that’s okay, too, she said.

“Parents have been made to feel that if they need to take a break, somehow they’re harming their child,” Lerner said, and that’s not true. Parents are human, too. As one exhausted mom told Lerner: ” ‘I am not a bottomless pit of empathy.'”

THE GIFT OF SELF-COMPASSION

These days, Bunner is seeing more parents reaching out for support for their children. But she’s also trying to help them see that therapy isn’t a magic wand and that parents’ mental health directly affects their children’s emotions and behaviour.

“My consistent feedback for stressed-out parents begins with, ‘What are you doing to take care of yourself?'” she said.

“We will have big, hard feelings and may not always express them appropriately, but that can create empathy when our children struggle to articulate their feelings in a healthy way,” she said.