During the COP26 climate summit last year, the government boldly promised to end the construction of new coal plants and phase out the dirtiest of those already running, even as energy demands soar in the manufacturing powerhouse.

“But this is not actually what Vietnam is doing at a national level,” energy research and policy analyst at Climate Analytics Nandini Das told AFP.

Vietnam pledged to reach net-zero carbon emissions by 2050, but with coal and gas still a major part of its energy mix one year later, that commitment is on shaky ground, she said.

The authoritarian communist state has also jailed four green activists this year, including anti-coal campaigner Nguy Thi Khanh, alarming environmentalists who argue it will be even harder for Vietnam to banish dirty energy without them.

“With the climate leaders in prison I think there’s grave doubt about the country’s ability to achieve its goals,” said director of the Goldman Environmental Foundation Michael Sutton.

He said “leaders like Khanh are instrumental in building public support” for radical change to Vietnam’s economy. 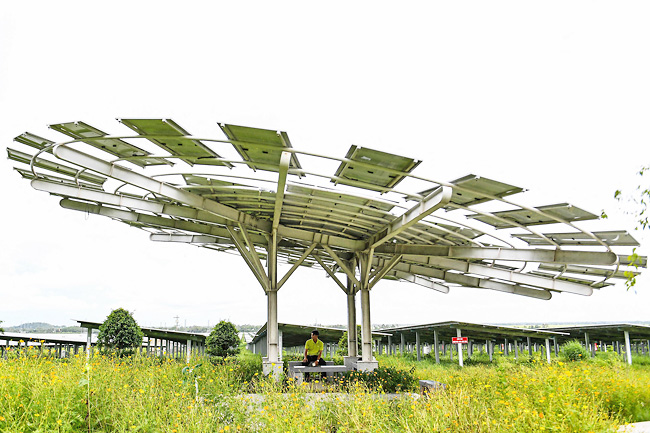 After China and India, Vietnam has the world’s third-largest pipeline of new coal power projects. But at COP27 this week, G7 countries could announce billions of dollars in funding to help steer Vietnam away from fossil fuels and the country could attract billions more in clean energy investment as part of the Just Energy Transition Partnership.

The rise of solar energy in the Southeast Asian nation has also been meteoric.

The share of electricity generated by solar saw the biggest rise in the world in 2021, jumping to 10 per cent from two per cent a year earlier, according to independent energy think tank Ember.

Last year, the country ranked in the top 10 globally for solar energy capacity.

In the Mekong Delta, farmer Doan Van Tien – whose community is poor, remote and has little access to the national grid – is one of those who benefitted.

For most of his life, he relied on a costly oil generator, until the arrival of 14 solar power batteries funded by Green ID, the non-profit environmental group founded by activist Khanh.

“It changed my life a lot,” he told AFP, gesturing to his lucrative avocado and mandarin crops.

“In the past we wanted to grow these fruit trees but we could not (afford to power) the water pump,” he said. Now he waters his plants for free.

Others jumped on solar thanks to generous feed-in tariffs, but its success has hit a roadblock: infrastructure limitations mean transmission lines cannot handle supply spikes, forcing a limit on how much power operators can feed into the grid.

In other strides down a greener path, the environment ministry’s latest climate targets, issued in July, are “clear and much more ambitious than previous” goals, according to research fellow at the Crawford School of Public Policy at the Australian National University Thang Do.

The ministry’s new strategy boosted the reduction target for greenhouse gases by 2030 from last year’s goal of nine per cent relative to business as usual, to 43.5 per cent.

Emissions are expected to peak in 2035 before falling to net-zero in 2050.

The problem, Das argued, is that the new policies have yet to be implemented.

“We’ll give it six months to see,” she said.

The arrests of climate campaigners have made Vietnam’s energy intentions even more difficult to decipher.

Khanh worked closely with the government to find a way to reduce coal use, while NGO worker Dang Dinh Bach, made it his mission to inform residents about the health impacts of potential power plant projects.

He “offered advice to them so they understood their rights and could practise those rights”, Bach’s wife Tran Phuong Thao told AFP.

In 2017, Bach and his non-profit group Law & Policy of Sustainable Development, helped push the government into a rare climbdown over a power plant in Binh Thuan province that it had permitted to sink a million cubic metres of coal sludge into the sea.

He was arrested in June 2021, and sentenced this year to five years in prison.

Although there is little time to waste for Vietnam, one of the countries most vulnerable to climate change due to its long and densely populated coastline, researcher Thang believes there is no choice but to be patient.

“The whole economy is now dependent on coal so that makes it very challenging to change,” he said.

“It’s not an easy decision to make to just close a coal power plant and tomorrow we’ll open a solar and wind, it takes a lot of time and resources and also mindsets to be changed.”