BERKELEY (AP) – Berkeley, an eclectic California city renowned for tie-dyed hippies and high-brow intellectuals, is experiencing a 1960s flashback triggered by People’s Park, a landmark that has served as a counterculture touchstone, political stepping stone and refuge for homeless people.

The three-acre site’s colourful history, forged from the University of California, Berkeley’s (UC Berkeley) seizure of the land in 1968, has been thrust back into the spotlight as the school renews efforts to pave over People’s Park, this time for a USD312 million project that includes sorely needed housing for about 1,000 students.

After a judge sided with the university in a legal scrum over the project, construction finally began on August 3 only to abruptly stop a few hours later after a swarm of defiant protesters, who had been sparring with police, toppled fences surrounding the park.

The delay was only supposed to last a few days, but the coalition fighting the university’s plans won an appeals court stay that will prevent construction until at least October.

But the lull hasn’t muted the contentious debate around a historic spot once hailed as “a trace of anarchist heaven on Earth” by former UC Berkeley professor Todd Gitlin and derided by former city Council member John DeBonis as a “hippy Disneyland”.

The park turned into both a symbol of resistance and mayhem during a deadly 1969 confrontation known as ‘Bloody Thursday’, emboldening then-California Governor Ronald Reagan to send in 3,000 National Guardsmen for a two-week occupation that evoked images of war in a city that was clamouring for peace in Vietnam. 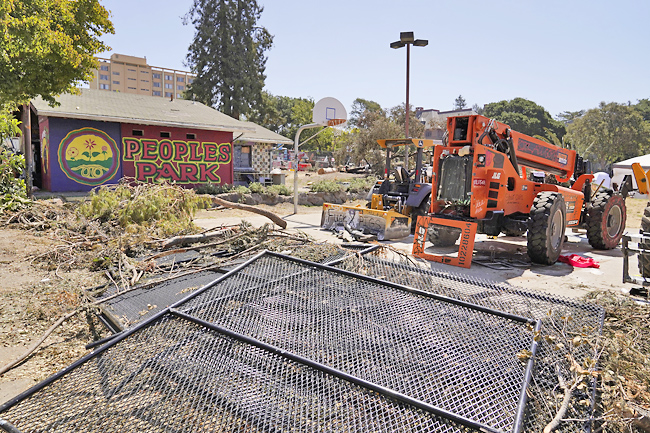 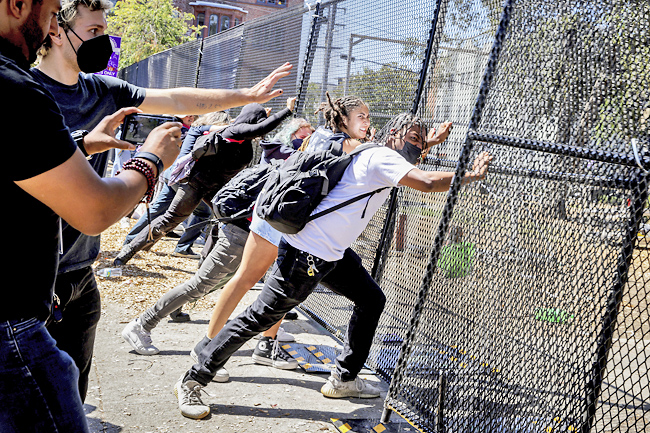 Don Mitchell, whose father was a UC Berkeley professor during the 1969 uprising, views People’s Park as a social experiment worth saving as more cookie-cutter communities get built in the United States (US).

“People’s Park has always been a place that was made and regulated by the people who use it,” said Mitchell, a professor of human geography at Uppsala University in Sweden.

That ethos has long made the park a waystation for homeless people, with scattered tent clusters and makeshift kitchens. Drug use and violence have helped spur support for the university’s development plans.

At Atmaa Das, 28, began spending time in People’s Park not long after leaving Alabama in 2014 and found his way there again a couple weeks after workers left behind construction equipment, now splattered with graffiti – part of USD1.5 million in recent protest damage, the university estimated. “I came here looking for the promised land and reckon I found it,” he said on a recent morning, strumming his guitar while singing parts of Woody Guthrie’s This Land Is Your Land.

University officials say they are sympathetic to both the park’s heritage and the needs of homeless people who have lived there since another set of fences surrounding the property were removed in 1972.

The school and city moved dozens of homeless people into a motel as part of an USD8 million relocation initiative and officials promised to keep most of the site as open space.

Not even People’s Park supporters dispute more affordable housing is needed – the median sales price for a home near the university is USD1.5 million. But critics blame mismanagement for the crisis and contend the university could build on its other property.

The glaring shortage is mainly why city officials back the university’s plan, including city Council member Rigel Robinson, who represents the People’s Park area.

“People’s Park has been a powerful symbol of resistance against government oppression, but it has since become a symbol of something else entirely: our failure as a region to respond to the housing crisis,” Robinson said. “The time has come to turn the page.”

But this month’s protests showed that a significant part of Berkeley isn’t ready to let go, mainly because of what the park has come to symbolise since UC Berkeley seized it for USD1.3 million in 1968 under eminent domain and demolished homes there. After citing a need for an intramural football field, the school instead let the site deteriorate into a muddy mess mostly used for parking.

After boilermaker Michael Delacour led a grassroots group to plant vegetation, turning the eyesore into a community magnet, UC Berkeley decided to fence it off on May 15, 1969.

That set the stage for rebellion. At a rally outside UC Berkeley’s administration building, incoming student body President Dan Siegel urged the crowd to “take the park”.

“Some of the issues now are like 1969,” Siegel, now a lawyer in nearby Oakland, recently told The Associated Press. “People’s Park is both a park and a symbol of activism that is worthy of protection.”

The infamous 1969 clash between hundreds of police, some of them dubbed “Blue Meanies”, and protesters became a flashpoint in the civil rights and anti-Vietnam War movements. During the hourslong melee, police fatally shot a man standing on a rooftop and blinded another who was struck in the face with birdshot. Dozens of protesters were wounded.

Then Reagan, who had vowed “to clean up the mess in Berkeley” during his victorious 1966 gubernatorial campaign, called in military troops. Before an uneasy truce was reached May 30, 1969, hundreds more were arrested and, in another infamous moment, an Army helicopter sprayed a crowd with what authorities called tear gas but others insisted was an even more dangerous substance.

Some of Reagan’s detractors still believe he deliberately deployed strong-arm tactics to establish himself as a law-and-order leader while pursuing a political agenda that led to his 1980 election as president.

Reagan “wanted to wipe out the social and political history of Berkeley and now the university is carrying it forward”, Smith said on August 3 while construction crews used bulldozers and buzz saws to topple most of the park’s trees, including some that predated the school’s purchase 54 years ago.

The clear-cutting depressed Bertha Jones, who lived in People’s Park for several years before accepting the university’s offer to move into a nearby Rodeway Inn.

Other former People’s Park inhabitants told the AP they moved into the motel reluctantly, though they like having their own bed and bathroom. What they don’t like is not being given room keys, or being banned from leaving the premises from midnight to 6am.

After spending most of his time in People’s Park for seven years, Eric Morales moved in early June to the Rodeway Inn with his dog, Bonita. But he will always consider People’s Park home.