AP – Designers and lighting companies have been busy coming up with new ways to hold a lightbulb and project light, and winter is a great time to explore their latest solutions.
A look at what’s new:

Bradley sees a trend toward nature-inspired objects and spaces. “It’s something deeply rooted in all of us,” he said.

Two that he’s been drawn to recently: John Pomp’s Tidal Chandelier, and Ochre’s Moonlight Murmuration. “They’re fascinating, both in their form and the techniques required to make them.”

In Murmuration, the British design firm Ochre conceptualizes the phenomenon of birds swooping through the sky in mesmerising, cloud-like formations. Dozens of LED-lit solid glass drops are suspended from a white canopy to look as though they had been caught in mid-flight at night.

Bradley’s own Samsara fixture suspends white porcelain rings from a brass spine, evoking the rib cage of a sun-bleached whale skeleton. Other configurations he’s devised suggest the bowing branches of a snow-covered aspen tree, a raptor’s nest, a constellation.

“I aim to capture a moment of beauty in the natural world, and bring it to life,” he said. 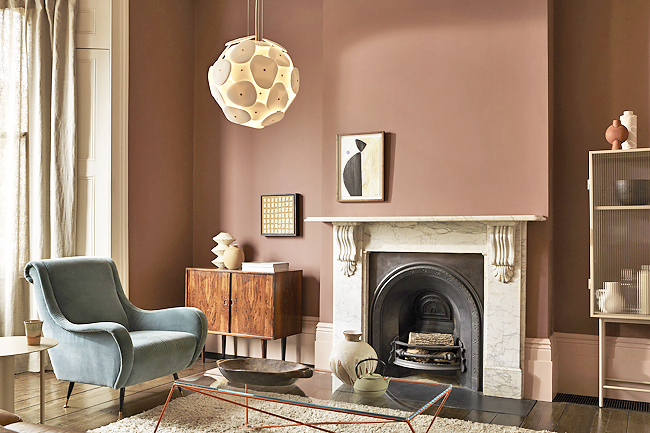 Designers of lighting fixtures are getting creative with materials, including fiber, porcelain, glass, fabric, paper and metal.

Some statement lighting has a cosmic vibe. The constellation style comes in configurations big and small, with sticks of LEDs arranged to suggest starry skies.

CB2’s Savina pendant is an alabaster orb with swirls that resembles a planetary gas giant.

And British designer Lee Broom’s Crescent collection includes suspended lighting with illuminated acrylic spheres bisected to reveal a brass interior, as though a futuristic space station were opening its door. Broom’s Eclipse fixture melds an acrylic circle with a mirrored one, like two moons meeting.

Peter Bowles, who with son Charlie runs Original BTC, was one of the first to use bone china in lamp-shade design, over 30 years ago in Oxfordshire, England.

“The potter he approached initially thought he was crazy, as they’d only ever made tableware and similar products – never lighting,” said Charlie Bowles.

But he said something special happens when the material meets light. “Bone china appears pure white once it’s fired, but then gives a lovely warm soft glow when lit,” he said. “Despite its challenges and reputation for being a tricky ceramic to work with, the end result speaks for itself – it’s versatile, fun to design with, and the light you get is soothing and can positively affect your mood.”

This year, the studio introduced Shard, a circular chandelier of handmade tiles, and Pebble, an elegant ceiling fixture formed of dozens of pieces of bone china, polished like river rocks and fastened to form a kind of mineral cocoon.

Arteriors has a collection of pendants crafted from materials like wooden beads, raffia and plant fibers. A pendant called Jana, for example, was inspired by traditional thatched roofs; brown wicker fringe creates a playful, textured fixture, suspended on an antique brass chain.

The Jemai table lamp has a charcoal-hued base formed from ricestone, a fine gravel. The stacked asymmetrical forms create a groovy ‘70s vibe.

Designer Pascale Girardin in Quebec, Canada, was inspired by childhood memories of picking petals off flowers to create her Love Me Knot pendant, for Juniper. The dramatically scaled fixture, composed of hand-formed acrylic petals suspended by cables from a matte white canopy, has a romantic, ethereal vibe.

Lampshades are a great way to introduce an artsy element – and you can usually pop one onto a base you already have.

Carla Regina and James Andrew, who run Regina Andrew Detroit in Michigan, say sconces have been on the uptick with their clientele.

Besides providing light, sconces are wall art and “can quickly transform and update a room,” Regina said.

Their Happy sconce has two white light balls perching playfully atop a smile-shaped tubular base in nickel, rubbed bronze or brass. Their Gotham sconce pairs a sleeve of alabaster with Art Deco brass trim – it’s evocative of that era, yet classically modern.

Inspired by antlers she saw while visiting Jackson Hole, Wyoming, designer Beth Webb had an antler cast in resin and transformed into the Jackson sconce, with a white linen shade and nickel backplate.

Apartment dwellers take heart; there are many plug-in or battery-operated sconces that don’t need to be hardwired; just attach them to the wall and use a remote.

Schoolhouse, AllModern, Rejuvenation and Lamps Plus all have a wide range of plug-in styles, and battery-operated ones can be found at Wayfair and Amazon.

The Scandinavian trick of using low-level and indirect lighting indoors at this time of year works well because it keeps us attuned to the outdoors.

“It’s more about embracing winter’s natural light, and working to amplify it on those darker days,” said interior designer Clare Gaskin in London.

She suggests wall and pendant fixtures with reflective interiors to create ambience. Brass or copper give a lamp’s bulb a warm glow.

Create islands of light in a space for working, relaxing or doing both at different times of day.