NEW YORK (AP) – DeMar DeRozan’s (AP, pic below) jumper with less than a second to play gave the Chicago Bulls a 118-117 victory over the New York Knicks on Friday night.

“You don’t think too much about it,” DeRozan said of his jumper from near the foul line. “You just read the way they’re playing you. It’s second nature. I don’t care how many shots I missed before.

“That’s a brand new opportunity and you approach it that way.”

RJ Barrett scored a season-high 44 points for the Knicks. Julius Randle finished with 29 points and 12 rebounds.

The Bulls’ comeback from a six-point deficit in the fourth quarter was aided by poor foul shooting by the Knicks, who finished 15 for 26 from the line, including four misses in the final 1:06. 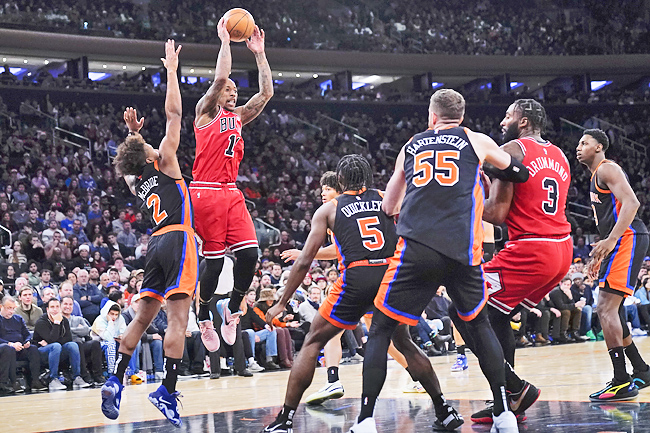 Quentin Grimes’ layup with 1:26 remaining in the third quarter had extended the Knicks’ biggest lead to 91-83. Chicago had its biggest lead at 29-22 at the end of the first quarter.

Immanuel Quickley added 15 points and Brunson finished with 12 points and nine assists for  the Knicks.

“It wasn’t any one particular play. I just felt like we never really got our defence established and it was an offensive game,” Knicks coach Tom Thibodeau said.

“It’s hard to slow those guys down once they get their confidence going like they did.

“We missed some free throws. Things can change real fast in this league.”

It was the Knicks’ second straight loss after eight consecutive wins.

Bulls: Only seven Bulls have started a game this season. Six have started at least 14 times, with Javonte Green (out with a sore right knee) only getting one.

Knicks: New York is now 8-9 at home this season. Grimes had started 15 consecutive games before missing Wednesday’s game with Toronto due to a sprained right ankle.

Thibodeau initiated a successful coaches’ challenge early in the third quarter, his fourth overturn in five attempts this season.